Home · Virtual Valley · Trails to the Past · Harper’s Meadow 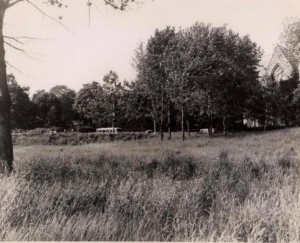 Located between Northwestern Avenue, Germantown Avenue, and Forbidden Drive, visitors can enjoy Harper’s Meadow. In 1886, Henry Houston established the initial 60 acres of The Andorra Nurseries but previously wanted approval to bring a railroad system from Roxborough to Chestnut Hill.

In 1891, Houston hired William Warner Harper, Proprietor of Andorra Nurseries, who lived on Thomas Road at “The Andorra House.”

Houston passed away in 1895 and Harper took out a 99 year lease from the Houston Family and began to market landscape design services while purchasing more then 1,400 acres spanning up to Ridge and Butler Pikes. You can find various editions of The Andorra Nurseries Catalog from the late 1800s to the early 1900s through google.com and The Pennsylvania Horticultural Society’s website. 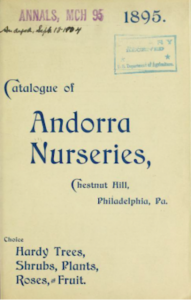 Harper was very fond of the Wissahickon Valley. So fond, that he was one of the founders and long time board member of the Friends of the Wissahickon (FOW). He took great pride in protecting the land from construction and stressed the importance of trees. In 1930, FOW raised $58,000 in their first decade (equivalent to about $1 million in early 21st century values) and gave it to Fairmount Park. Fairmount Park purchased 14,000 trees mainly from Harper. FOW formed a tree commission in which Harper was a member. Aerial shots of the Wissahickon were taken to show bare spots needing filling and the importance of outlining the park with trees to block off undesirable views of buildings nearby. At one point, there was a proposal to build homes on the land (now known as Harper’s Meadow) which citizens quickly came together to advocate against. The park commission, citing lack of funds, declined to purchase this land so FOW contributed $19,000 to buy the site and hold until the commission could pay back.

In an effort to address the terrible economic co 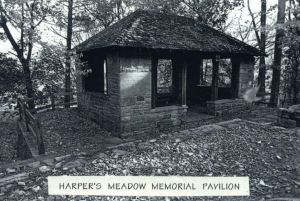 nsequences of the Great Depression during the 1930s, President Franklin D. Roosevelt approved his New Deal. With this, he formed the Works Progress Administration (WPA). The WPA employed thousands of Americans to undertake construction projects in public parks around the country. In 1931, over 500 men were working in the Wissahickon. In December of 1934, Harper passed away. In 1937, WPA awarded a grant to FOW and they donated this valiant piece of land as a memorial to Harper.

This park’s entrance is a 20-acre tract known as Harper’s Meadow, formally dedicated in the spring of 1937. It was filled in and landscaped by WPA under sponsorship of the Friends of the Wissahickon. To this day, it continues to serve as a picnic ground and a recreation spot. This picnic shelter, made of local stone, was one of numerous projects that the WPA carried out to improve the Wissahickon Valley Park. This memorial pavilion, located on Forbidden Drive, reminds us daily that Harper was truly “A lover of nature in all its forms.”