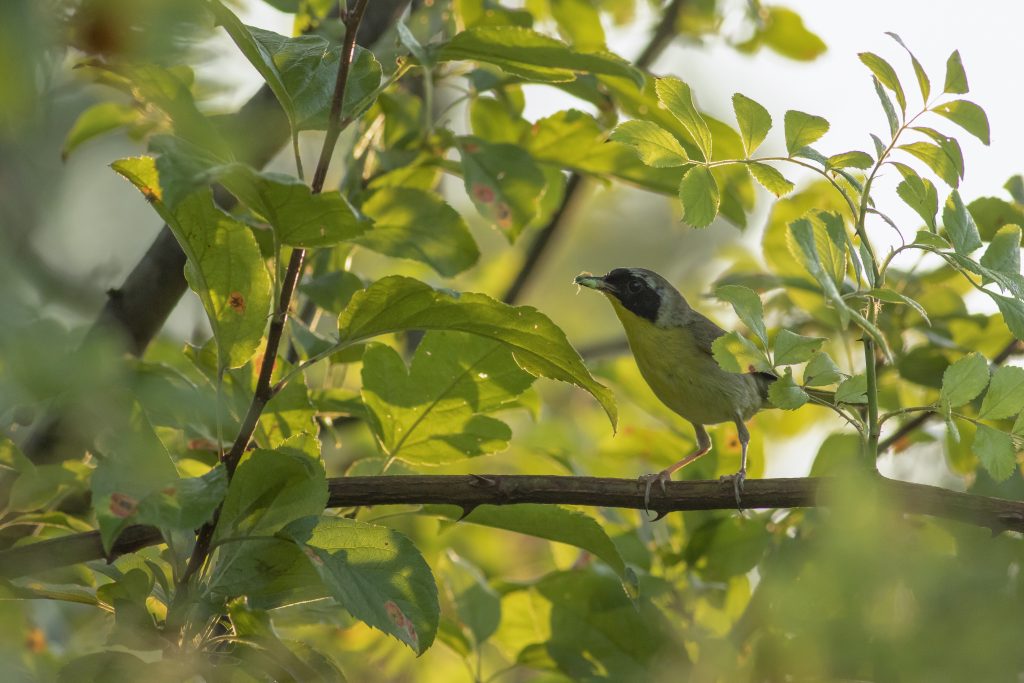 What lives in the Wissahickon?

Many different species of plants and animals rely on the Wissahickon Valley’s old and new growth forests, meadows, and creek for critical natural habitat. Opossum, deer, raccoons, groundhogs, red foxes, and other animals can be found here. Salamanders, frogs, toads, turtles, and snakes also make their home in the park.

One of the largest urban parks in the United States, Wissahickon Valley Park is also an Audubon Important Bird Area. From hawks and woodpeckers, to wood ducks and songbirds, over 200 species of birds are found in the park. See the most recent recorded birding sightings on eBird below.

Friends of the Wissahickon’s habitat monitoring program offers opportunities for citizen scientists to get involved in conserving this diverse ecosystem. Help out your habitat here!

Plants & Animals That Can be Found in the Wissahickon Valley Park:

Pileated Woodpecker (Hylatomus pileatus): This woodpecker is one of the largest forest birds in the U.S. and is easily identified by its flaming-red crest. Listen for the loud call, Kuk-Kuk-Kuk, and the whacking sounds made by this bird as it searches for insects in dead trees and fallen logs.

Great Blue Heron (Ardea herodias): These birds are the largest of the North American herons and have long legs, a sinuous neck, and a thick, dagger-like bill. They dwell in freshwater habitats and can be observed wading slowly or standing statue-like along stream banks, stalking fish and other prey in the shallow water.

Indigo Buntings (Passerina cyanea): One of the most striking songbirds in the eastern U.S., the deep-blue-colored males of this species are occasionally spotted singing along roadsides and meadows. They typically make nests of grasses, leaves, and bark strips in dense shrubs a few feet from the ground. A neotropical migrant, it winters in Cuba or Central America.

Wood Duck (Aix sponsa): The male wood duck is one of the most colorful waterfowl. These birds live in wooded swamps, streams, and ponds, nesting in holes in trees or in nest boxes installed along the water’s edge. They are one of the few duck species who can grip bark and perch on branches.

regalis): This species is the caterpillar (larval stage) of the regal moth, one of the largest and most spectacular moths in the eastern U.S. This caterpillar is most commonly found on hickory, walnut, sweetgum, and sumac trees, and is observed when it is full grown and descending from trees in search of a site for pupation (cocoon stage).

Northern Two-Lined Salamander (Eurycea bislineata): This amphibian is a common greenish yellow to yellowish orange salamander with a black or brown line running from each if its eyes to its tail. Its underside is yellow. It prefers shallow stream banks or hillside seeps with sandy to gravel soil. It is one of our most common stream salamanders.

(Nerodia sipedon sipedon):  A non-venomous species, this snake is found in a variety of aquatic habitats such as lakes, ponds, rivers, streams, and wet meadows. While they may be found under rocks or logs, they are typically observed in the open, basking or swimming. They can exhibit a mean disposition and inflict a painful (non-venomous) bite if handled, as well as a pungent musk! 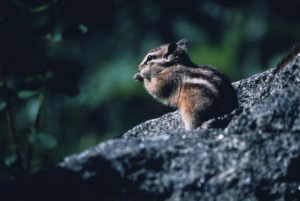 Eastern Chipmunks (Tamias striatus): This member of the chipmunk species is found in eastern North America and lives for about three years in the wild. Because it is awake from dawn until dusk, the chipmunk is easy to observe in the Wissahickon. But in late fall/early winter, these small ground-dwelling rodents disappear into their burrows to spend the winter in a torpor. Every few days the chipmunk will awaken, eat some of the food in its storage chamber, groom its fur, and then go back to sleep. You can sometimes find their two-inch diameter burrow entrances under exposed roots and log piles and in earthen banks. 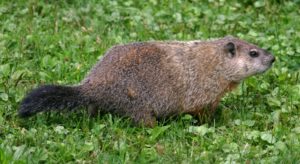 Woodchuck (Marmota monax): Also known as the groundhog, this rodent belongs to the group of large ground squirrels known as marmots. Adults reach about 8.6 pounds and 16 inches in length. The woodchuck is Pennsylvania’s only true hibernating mammal (except bats). To prepare for the winter, the woodchuck eats as much as it can during the fall. Photo by Doug Wechsler 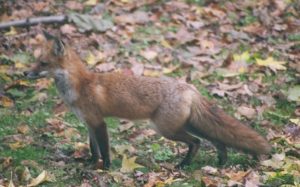 Red Fox (Vulpes vulpes): The red fox is the largest of the true foxes and the most abundant wild member of the Carnivora. They live for about five years and grow to a height of 14-20 inches and a weight of ~31 pounds. They are secretive but you can often tell where they have been by their scent, which is similar to a skunk’s, but fainter. They are usually found near areas of both fields and woods in the early morning. Photo by Shirley Gracie

Nodding Trillium (Trillium cernuum): This long-lived wildflower is named for its three leaves and solitary flower that hangs below its leaves, bearing bright red fruit that ripens in late summer. This plant can be found in wet, swampy woodlands, as well as upland, mixed conifer-deciduous woodlands. Photograph courtesy of Sean Solomon, TheSanguineRoot.com. 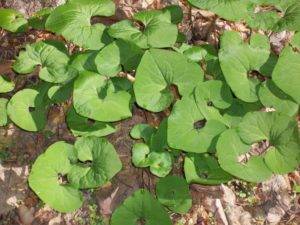 Canada Wild Ginger (Asarum canadense): This is a perennial herb native to rich, moist forests in eastern North America. It blooms in early spring, developing distinct, hairy, cup-shaped, tan or purple flowers which terminate in three long spike-like sepals. The long rhizomes give rise to persistent kidney-shaped leaves, which Native Americans used as a seasoning. They often form colonies or clusters as the rhizome spreads. 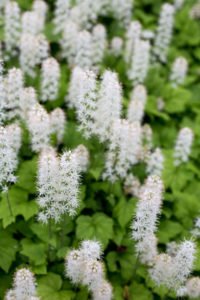 Foamflower (Tiarella cordifolia): is commonly found in the woods of eastern North America. It grows easily and will spread when given moist soil high in organic matter and shade. In early spring, fairy wand flowers of white or light pink appear over heuchera-like green, deeply veined leaves which are often tinged with burgundy. 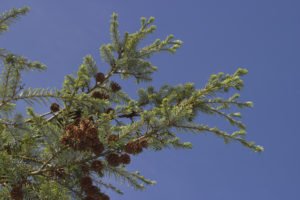 Eastern Hemlock (Tsuga Canadensis): Also called Canada hemlock or hemlock spruce, this tree is a slow-growing, long-lived tree which grows well in shade. It may take 250 to 300 years to reach maturity and may live for 800 years or more. Many species of wildlife benefit from the excellent habitat that a dense stand of hemlock provides. 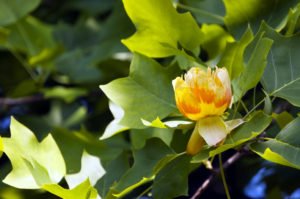 Tulip Poplar (Liriodendron tulipifera): This tree is not a poplar, but a member of the magnolia family. The leaves are tulip-shaped, alternate, and simple. The leaf is smooth on both surfaces, dark green and lustrous above, pale and often with a slight whitish bloom beneath. Tulip poplar produces tulip-shaped, light greenish-yellow flowers from April to June. It grows rapidly, attaining heights of 80-120 feet and a trunk diameter of 2 – 5 feet.

magnolia species is a fast-growing tree with clusters of large (18- 20-inch long) diamond-shaped leaves near its branches that resemble umbrellas. These magnolias have intensely fragrant flowers that develop cone-shaped, rosy-red fruits. The trees are often found in moist understory forest settings.

Invasive pests in the Wissahickon: 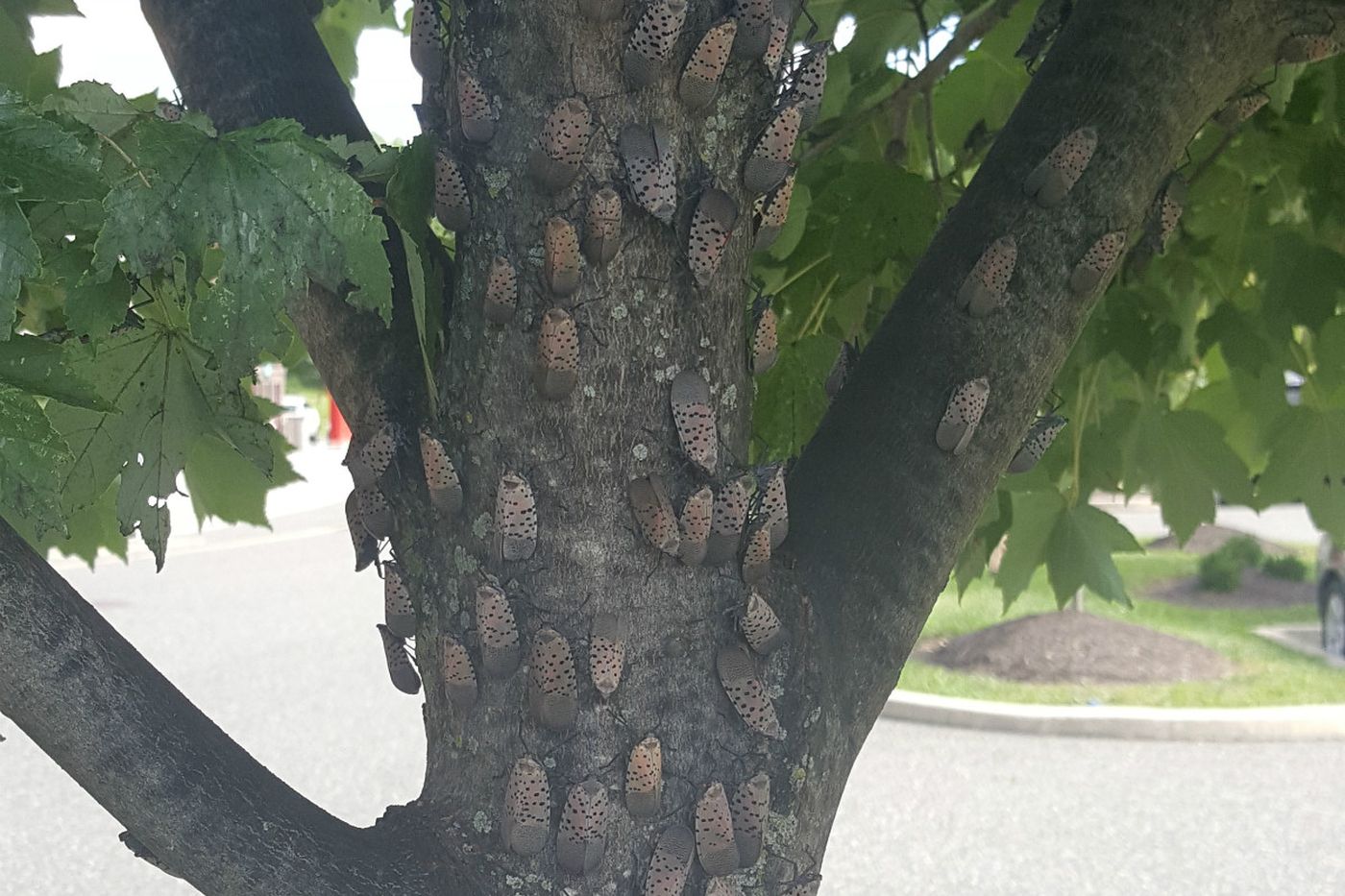 The spotted lanternfly is an invasive plant hopper discovered in Berks County in 2014. Native to China, India, and Vietnam, these insects prefer to attack tree of heaven, but will feed on many other host plants including grapes, apples, stone fruits, and forest product industries. Early detection is vital for the protection of Pennsylvania agriculture. Please follow these instructions from the Pennsylvania Department of Agriculture on what to do if you see egg masses or adult insects.

Be sure to check out the Creekside Classroom on our Virtual Valley for educational videos and articles on all things Wissahickon!