Home · News · History · Get Spooky with a Wissahickon Walking Tour…

Get Spooky with a Wissahickon Walking Tour… 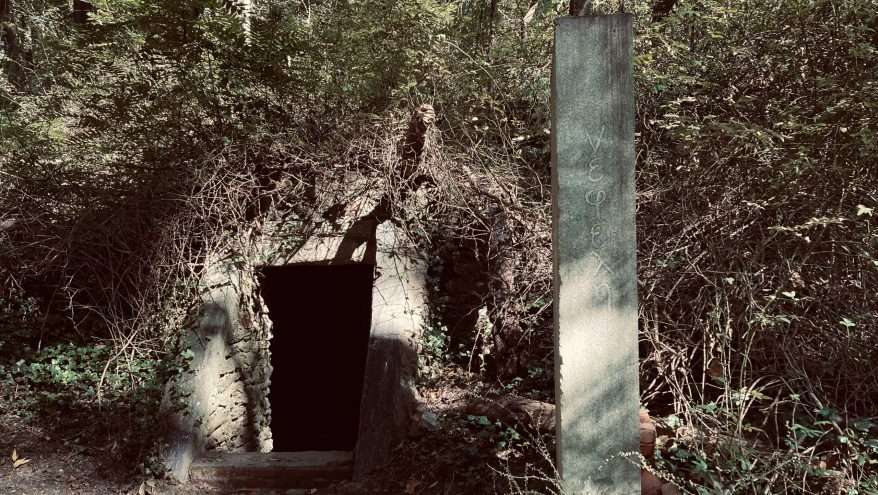 “The Wissahiccon, however, should be visited, not like “fair Melrose,” by moonlight, or even in cloudy weather, but amid the brightest glare of a noonday sun; for the narrowness of the gorge through which it flows, the height of the hills on either hand, and the density of the foliage, conspire to produce a gloominess, if not an absolute dreariness of effect, which, unless relieved by a bright general light, detracts from the mere beauty of the scene.” – Edgar Allan Poe, in Morning on the Wissahiccon (1843).

It’s October, and the time that fall turns to fright – which means it’s time to venture into the hidden history and sinister secrets of a place that gave Edgar Allan Poe the creeps in the dark! We’ve put together this self-guided tour of some of the best sights and frights of Wissahickon Valley Park, starting at Historic Rittenhouse Town. Follow along on the map below or click here for the full route (please note that part of the 2.2 mile walk is on trails that may be difficult for inexperienced users.) 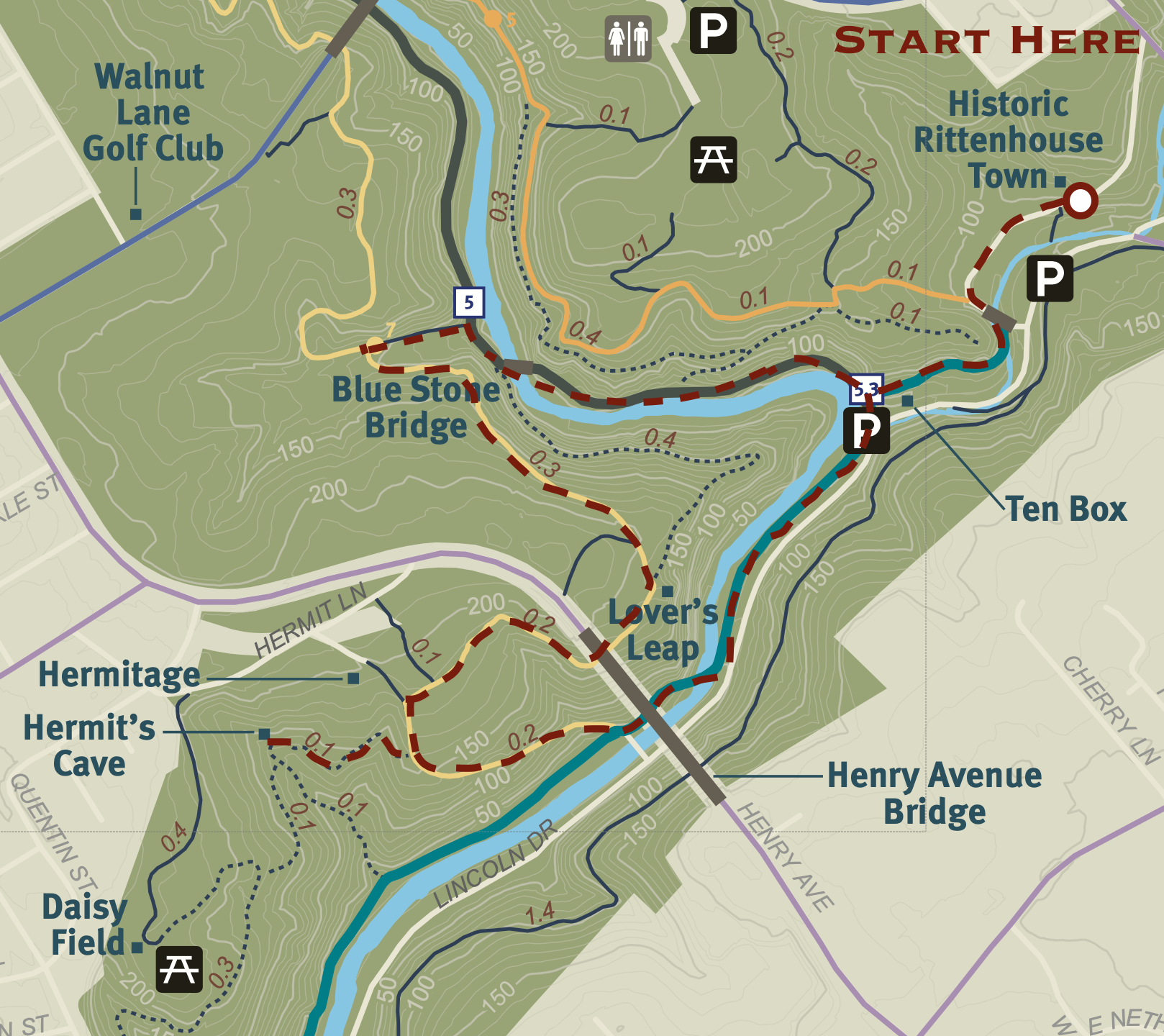 The Wissahickon wasn’t always a park – and in fact it was many things before it became one. People have lived on this land for hundreds of years, including the Lenni Lenape, early European settlers, and both poets and industrialists in the 19th century – and it has been shaped by the people who were born, lived… and died here. Another way to put it: you’re never alone in the Wissahickon.

At Historic Rittenhouse Town, you can see the remaining houses from a once-thriving colonial mill town. Founded in 1687 by papermaker William Rittenhouse, whose mill produced paper for the then-new city of Philadelphia, Rittenhouse Town once had over forty houses. Check out the oldest surviving house, the stone Rittenhouse Homestead and Bakehouse. If you cross the bridge to the house and take a look at the side facing Lincoln Drive, there’s a little reminder of mortality – the door to nowhere on the second floor. Known as a “coffin door,” it could be used to raise or lower things from the upstairs parlor – and you can imagine what those 18th-century minds gravitated to.

Stay on the paved trail, and you’ll come to a log building overhanging the path. This is the Ten Box guardhouse, built by the WPA in the 1930s and once used as headquarters by the now disbanded Fairmount Park Guard. Since they left, the structure has been empty for many years (though restored in 1999 by the FOW Structures Crew), though it’s worth taking a little peek through the window…

Step through the gate and hang a right onto Forbidden Drive (so named because it was forbidden to cars in the 1920s). You’ll pass by a greenish bronze plaque, commemorating the 1777 Battle of Germantown. During the morning of the battle, American cannons across the creek from you fired on British troops on present-day Schoolhouse Lane, while to the north, George Washington’s army was bloodily repulsed by a British force at the Chew Mansion. The failure of the battle and the previous American defeat at the Battle of Brandywine led Washington to return to winter quarters in Valley Forge. 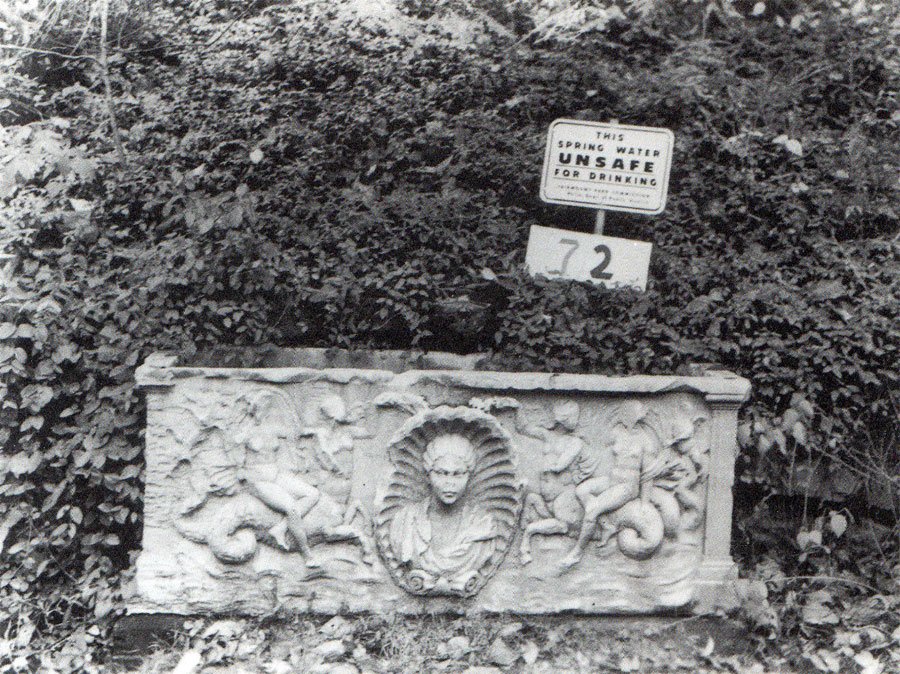 You never know what you’re going to find in the Wissahickon, and this is one of its enduring mysteries. As you walk upstream from the parking lot at Ten Box toward the Blue Stone Bridge, at a little past half the distance look for the small remnant of a Roman Sarcophagus nestled against the rising hillside. It is easy to miss.

In the summer of 2000 Donald White of the University of Pennsylvania  came across the remnants of a Roman sarcophagus.  While he was walking his dogs, their sniffing exploration along the side of forbidden drive called his attention to what looked like an abandoned refrigerator.  On closer inspection he found the carved marble structure, which once was the base of an ancient tomb.

Fairmount Park’s Historic Preservation officer produced a photo of the intact sarcophagus and more information – it seems to have served as a watering trough for horses, fed by the McFarland Spring above your location. There is no record of the donor or why this valuable antique was placed at this location, but in the photo it resembles a type popular during the late second or third centuries CE.

Read more about this oddity here!

Let’s cross the Blue Stone Bridge up ahead. More than a hundred years ago, this bridge passed by the bustling Lotus Inn on the other side, which served foot and horse traffic along Forbidden Drive.

This inn was built sometime around 1840, and had an excellent location, close to the bridge from Rittenhouse Town on one side and to the Ridge Road on the other. In fact, Rittenhouse Lane, as the road was then called, was the main road between Roxborough and Germantown. Parties from the city would drive out to stay at the inn or to dine on catfish and waffles, carousing beside the flowing Wissahickon Creek.

The revels ended in 1916, when the Park expanded up toward the new Henry Avenue, and the Lotus Inn was condemned. Most of its foundations have now disappeared, but on warm summer evenings you can imagine the parade of visitors that once stopped by.

Take a left at the bridge onto the connector trail to Lover’s Leap. The natural surface trail is narrow and may be difficult for inexperienced hikers, so please be careful. 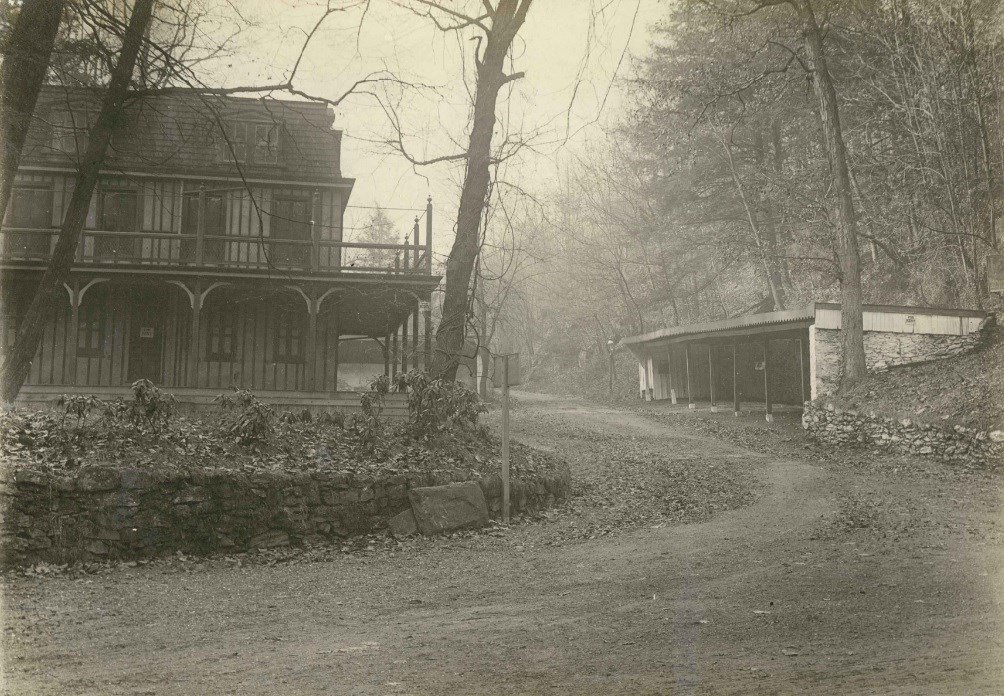 This rocky outcropping with a view of the junction of the Wissahickon Creek and Paper Mill Run has inspired many artists and writers over the years, including George Lippard, a contemporary of Edgar Allan Poe.

Raised in Germantown, Lippard was famous during the 1840s and 1850s for sensational gothic tales set in the Philadelphia area, including along the Wissahickon. In 1847, he married his wife, Rose Newman on this promontory. Tragedy stalked the Lippards, beginning in 1850 – first their daughter, then their infant son, and finally Rose perished in the span of a year. Alone and suffering from tuberculosis, Lippard died in 1854 at just 32 – his last words, “Is this death?”

Keep walking along the trail through the arches of the Henry Avenue Bridge. Do you notice it’s getting colder, or is that just me? You’ll come out onto a gravel trail, our next stop.

Stop 6: Hermitage Mansion and the Hermits of the Wissahickon

Look up to your right at the white Victorian mansion on the hill – the “Hermitage.” Built in 1848, its name gestures to an older and more sinister history. Turn off the gravel road to the trail on your right, again, and be careful walking down the steep incline.

We’ve saved the spookiest for last – it’s time to talk about the Hermits of the Wissahickon.

In 1694, a small group of German pietist monks established a monastic community in this small section of the Wissahickon Valley, led by scholar and mystic Johannes Kelpius. Believing, based on elaborate interpretation of the Bible’s “Book of Revelation,” that the world was going to end that year, the group sought to live a solitary lifestyle in the wilderness while awaiting the Second Coming. They were known by their contemporaries as the “Hermits of the Wissahickon,” or by themselves as “The Society of the Woman of the Wilderness”—the latter a reference to a passage in the Bible’s book of “Revelation” in which a woman flees to the wilderness to seek refuge from the apocalypse.

Kelpius originally hailed from Transylvania (yes, that Transylvania!), and was 26 years old when he formed the Society here in the woods. He was a musician, scholar and writer, interested in botany and astronomy. Indeed, many of the monks practiced medicine and composed music while waiting out the end of days. They’re thought to have lived in cabins scattered along the river, and are supposed to have constructed a wooden tabernacle and observatory on the site that the Hermitage now occupies for their meetings. Kelpius himself, however, would retreat to a cave in the woods slightly to the east.

Stop when you see a vertical stone slab at the turn of the trail. Around the corner is Kelpius’ cave – are you brave enough to venture in? 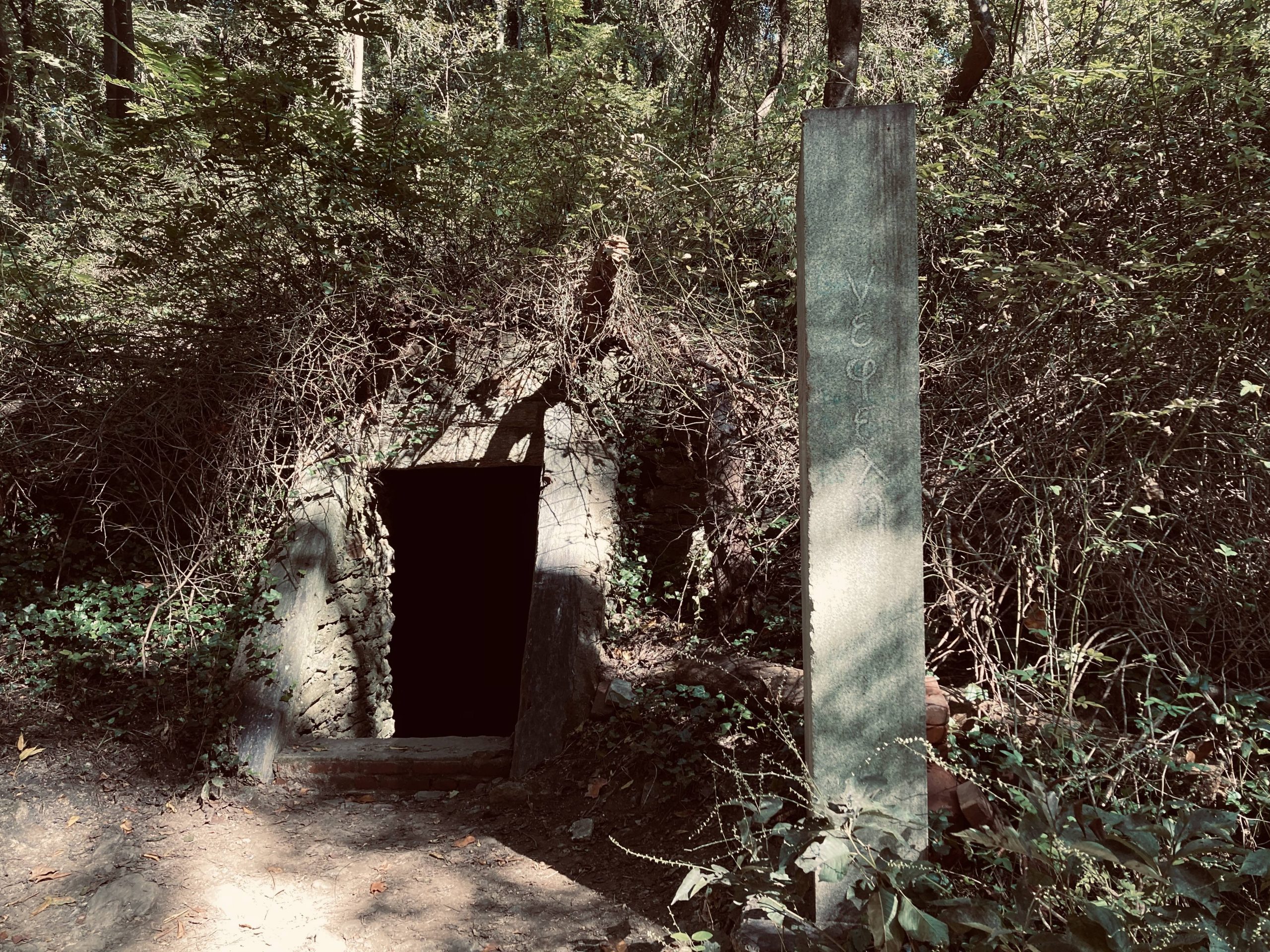 Inside the cave, it’s dark and damp – but it doesn’t go back too far. Another theory about the cave is that the current structure was used as a springhouse to help perishable food last longer before refrigeration, like several other caves in the park for which we have historical documentation. Johannes Kelpius has continued to capture people’s imaginations, however: the stone plaque referring to Rosecrucianism was added in the 1950s, and Philadelphia’s Kelpius Society works to research the site’s early history and the monastic community.

Step out into the light of day, and make your way back along the trail to the Hermitage. Once there, follow the gravel trail down towards the creek until you reach the Wissahickon bike trail. The sun feels nice! The weather’s warm! There’s nothing sinister in the woods… right?

We hope you enjoyed this Spooky Wissahickon tour! It’s a short walk back to Historic Rittenhouse Town on the bike path – just cross the bridges and you’ll be back at Ten Box.

Don’t miss our other October and Halloween events, including our Tuesday, Wednesday and Saturday service days and our October 31 Trick-or-Trash Clean-Up (bring a costume!)