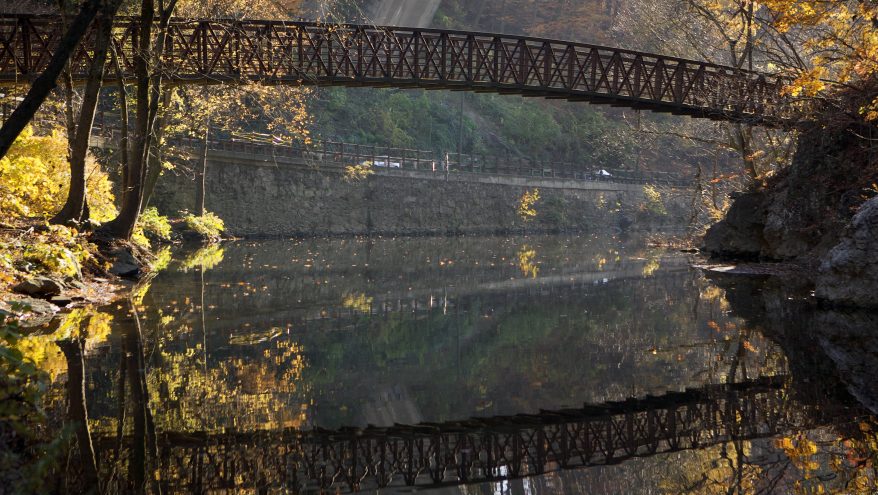 Effective March 1, 2021, the trail between Forbidden Drive and Hermit Lane parallel to Lincoln Drive will be closed until at least late 2021. Philadelphia Parks & Recreation will conduct the first major restoration on four bridges spanning this area in their 40+ years of service. While the closure presents significant inconvenience for commuters and park goers, it also demonstrates the City’s commitment to investing in important infrastructure.

The four bridges – three that form a boardwalk from Ten Box to the paved trail connecting to the one crossing Wissahickon Creek just below Henry Avenue – were part of a major project in 1979-80 to better connect the region’s recreational options. (The Circuit Trails organization continues this tradition today.) The trail, built for use by cyclists and pedestrians, carried a $1.5M price tag (5.7M in today’s dollars) split between the federal government’s Heritage Conservation & Recreation Service and the City’s capital budget. Improvements were made to existing trails on East and West River Drives, and a new bike rental station opened at Boathouse Row (and still exists). But the link between Forbidden Drive and the Schuylkill River Trail was the centerpiece of the project.

Describing the project in 1979, the Inquirer’s Thomas Hine called the new trail “the equivalent of a miniature interstate.” He also noted that while the recreational opportunities were exciting, the City was “particularly enthusiastic about the commuter possibilities” for residents of Northwest Philadelphia. Amazingly, Lincoln Drive was closed for construction when it opened, so many first impressions of the new trail were experienced in total silence — “unblemished serenity for a couple weeks,” as Robert Strauss described it for the Daily News at the time.

The success of the trail and bridges was evident by their dedication on October 15, 1980. Less than a month into its official existence, the trail was part of the Provident Marathon’s route. Likewise in November 1980, the bridges went full Hollywood. Philly natives Brian De Palma and George Litto filmed Blow Out entirely in the city. De Palma, the director whose work also includes Scarface and The Untouchables, had previously worked with producer Litto on Dressed to Kill, filmed in part at the Philadelphia Museum of Art. For Blow Out, they used the new bridge across the creek in a pivotal scene of the movie. John Travolta’s character Jack Terry is recording sound from the bridge when a car crashes dramatically from Lincoln Drive* into Wissahickon Creek. De Palma’s crew had to build a temporary earthen dam to pool the water deep enough to create the desired splash effect.

*Back in 1980, “Wissahickon Drive” went 1.2 miles from Ridge Avenue to the sharp bend at Ten Box, then continued through the park by its colloquial name, Forbidden Drive. Above Ten Box, “Lincoln Drive” continued north through Mt. Airy, following the route of Monoshone Creek. In 1984, Fairmount Park Commission and PennDOT renamed the full vehicular route Lincoln Drive to eliminate confusion and clarify signage, and “Forbidden Drive” became official between Lincoln Drive and Northwestern Avenue.