Home · News · Nature · What to see in the Wissahickon: Winter edition!

What to see in the Wissahickon: Winter edition! 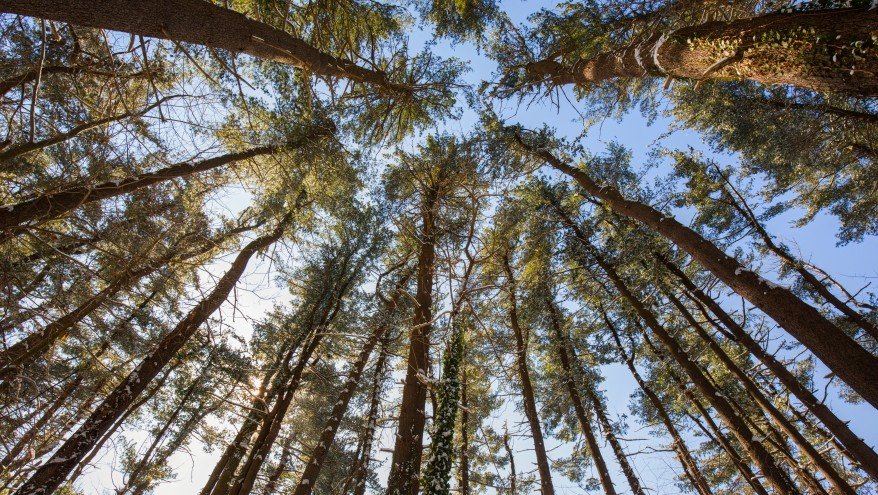 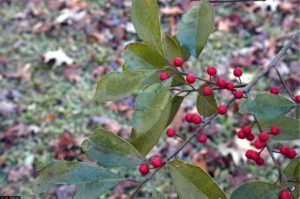 The American holly is an evergreen that bears showy fruit and a truly deer resistant Holly (yeah!), found in moist, well-drained soils, frequently in shaded woods. The trees are densely pyramidal when young, but become more open with age.

The leaves are dull, dark green, not shiny like English holly, and yellow-green beneath. The spiny-toothed, stiff, and leathery leaves are an easy identification.

The female fruits are red berries that appear in the fall. Many songbirds and mammals eat the bitter berries, and a flock of robins can strip all the berries in a day. Ilex opaca requires both male and female trees for fruit set, but one male holly will do for an entire neighborhood. 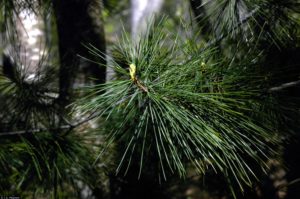 This familiar pine once blanketed the country, and some claim that a squirrel could travel from coast to coast without ever touching the ground. This fast growing tree, often found in clumps, can grow from 50-80+ ft. in rich, moist soil with lots of sun. When young, the white pine forms a symmetrical pyramid. As it ages, the crown grows several horizontal and ascending branches. They can be susceptible to wind and snow damage.

The leaves (bluish green needles) form in bundles of five. They are long and soft to the touch, and remain only two years. Like you and your dog, the needles shed—one-third of the tree every year, resulting in brown needles in the interior and on the ground, plus many worried homeowners. The bark is dark gray with furrows, and the cylindrical, often curved cones extend to three to seven inches.

The white pine is valuable for construction, leaving mostly second growth trees. The extremely straight trunks were once prized for ship masts. 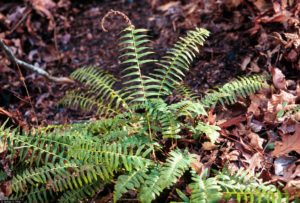 This handsome fern has substantial fronds in a vase-shaped whorl. It holds its glossy, dark green fronds through snow, ice, and bitter cold. Sometimes it is confused with the Boston fern, which is not evergreen.

Christmas ferns are extremely easy to grow in the seasonally moist soil of woodlands and wooded slopes with shade. Many are found around the Valley Green Inn. They are strongly clumping, spreading with offshoots.

The fronds may appear tattered and hug the ground after a hard winter, but leave them alone. Silvery new leaves will appear in the spring. These ferns attract ruffed grouse and provide cover for wildlife. 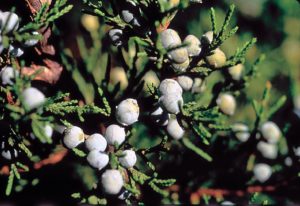 The Eastern redcedar (aka Red Juniper), an evergreen, is an aromatic tree, buttressed at the base with a narrow columnar crown reaching 40-60 ft. They are found in dry uplands and meadows. The cedars tend to bronze in winter.

The green, opposite leaves are scale-like, arranged in four ranks, and closely pressed and overlapping, but not toothed or needled. The bark is reddish brown, thin and shreddy. The female cones are one-quarter inch, dark blueberry-like, containing one to two seeds. The juicy “berries” are consumed by numerous wildlife, including the cedar waxwing.

The aromatic wood is used for moth-proof cedar chests, fence posts, and outdoor structures, and was once the almost exclusive wood for pencils.

Redcedars and apple orchards should NOT be planted near each other. They are alternate hosts for cedar apple rust, a fungal disease that causes twig or tip dieback on the cedars and defoliates the apple trees.

Wendy Willard is an FOW Crew Leader and Trail Ambassador, Horticulturist and Landscape Designer of Hort.Landscape. You can reach her at mhbMBH@aol.com