Walking on Thin Ice—in the Wissahickon 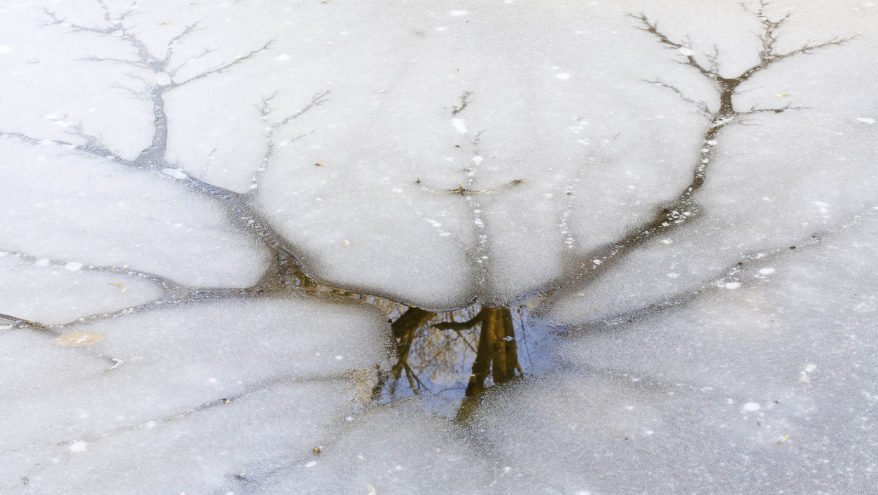 It is never a bad day to visit the Wissahickon.

However, it is sometimes treacherous under foot. When snowy trails have been compacted by foot traffic, their surfaces turn into dense ice. This ice remains on the trails long after the lighter snow in the adjacent forest has disappeared, having melted into the more porous ground or evaporated. With each freeze/thaw cycle, the tread becomes harder and the surface slicker. So when the woods are clear, the trails often remain corridors of slippery ice for weeks.

You could choose to avoid the trails under these circumstances, but then you will miss out on the beauty and serenity of the Wissahickon, something to be especially appreciated in the bleakest months of February and early March. How then to safely negotiate the trails when they are thoroughly iced over? If one is a mountain biker determined to ride in these conditions, the best bet is to use studded tires. If one intends to walk, the best option is some kind of metal sole.

There are many devices that attach to shoes. Ice climbers use crampons. I recall a friend wearing a pair of them to tromp into Carpenter’s Woods one winter in

the 1990s when the ice was at least six inches thick. That was a winter of many ice storms in close succession. I awoke one morning to find that during the night my two-and-a-half-ton Land Cruiser had traveled sideways across the street. Crampons are great in those once-in-a-century conditions. They are also great for the ice climbing, for which they are intended, but they are not so useful under normally treacherous conditions because they poke holes in surfaces that are not ice—like asphalt, or car floor mats, or your pant legs, or the top of your other foot if you don’t step just right. They do look cool though.

rubber. These work pretty well on ice, but like crampons, they are destructive to many surfaces and therefore must be removed when one re-enters civilization. They also look like they could make for difficult navigation over the bedrock that comprises portions of the trails in the Wissahickon. REI sells one version, which at $60 is not an insubstantial expenditure.

Also, designed as they are to fit onto the souls of boots, I do not think they would work well with the softer contours of running shoes. In the past I have run in boots in snow, heavy Galibiers circa 1978 that could have been used as motorboat anchors. I would rather not do that again.

In fall, winter, and spring I used to commute to work a couple times per week by jogging four or five miles on the White Trail, regardless of the weather. I still like to jog and walk in the park in all seasons. For many years, rather than boots, I have worn running shoes, sometimes with gators if there was deep snow.

Ice is another matter. There are traction options commercially available for regular shoes. Yaktrax are very popular. I know this because I find many half pairs or broken half pairs of Yaktrax in the Wissahickon in spring after the snow melts. My own pair lasted all of about 200 yards before, bound for destinations unknown, they parted ways with my sneakers. 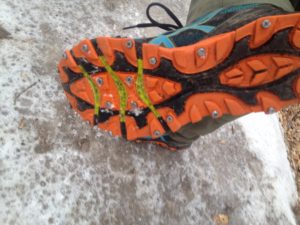 After that fiasco I devised my own simple inexpensive traction aid system. The system will work with virtually any shoe; I use them on an old pair of running shoes that became my dedicated ice shoes. All you need is about forty 7/16 x #7 pan head screws and a tool to drive them. The procedure is very simple: Run a bunch of the screws into the soles of your shoes. 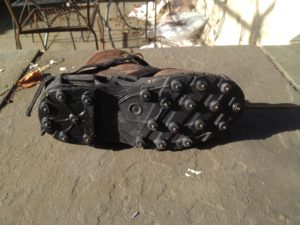 That said, for situations where absolute traction is a must—such as when operating a chainsaw when the trails are iced over—I use and highly recommend IceGrips. These are strap-on outer soles made by Winter Walking. I first saw a pair strapped to the boots of a PECO lineman during a winter snow and ice “event.” They are fantastic on ice and in snow and mud—any slick or soft surface. As the spikes are made of tungsten carbide—with a hardness of about 9 on the Mohs scale of mineral hardness, almost equivalent to a  ruby—they will scratch and mar just about any surface. Theoretically, even the garnets embedded in the Wissahickon schist are softer than the spikes on those souls. So they absolutely cannot be worn indoors or on any remotely fragile surface.

So there you have it—options from deluxe to improvised—there are many ways to equip yourself to navigate the Wissahickon when it is iced over. So go out there and enjoy the park, no excuses!

by David Dannenberg, FOW Board Member