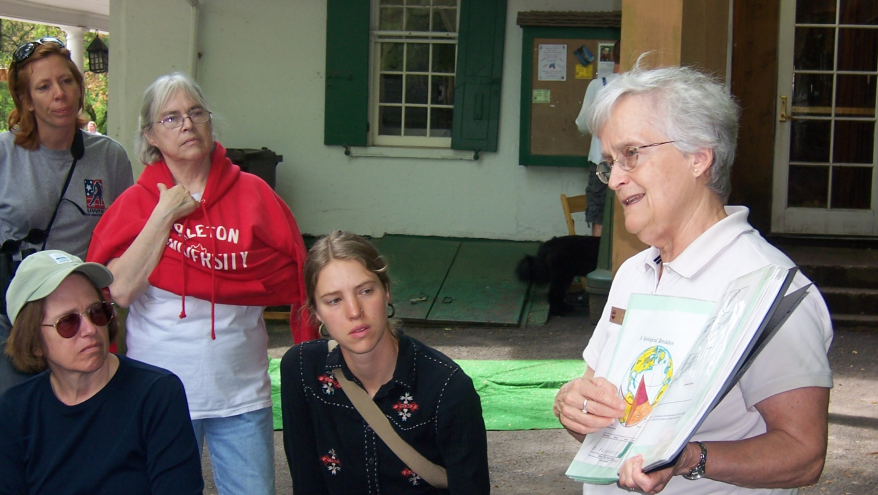 Let’s check in with Sarah West, long term volunteer, former board member, and FOW Trail Ambassador since 2008! Famed for her lectures on the history and geology of the Wissahickon, she was instrumental in starting FOW’s long-running Trail Ambassador Walks and Talks program.

How did you get involved with the Wissahickon? And with FOW?

I’m a former science teacher, I love the Wissahickon, and I love learning things – and the Wissahickon is an ideal place for all of that. You can see some science going on, you can be outdoors, you can learn things and just enjoy being in a beautiful surrounding. I found out about the Wissahickon in August of 1963, the first day my family became residents of Philadelphia, and have enjoyed it ever since. The day that we moved into the apartment building, our upstairs neighbor brought us a map of the Wissahickon. She said she’d seen us unload some bicycles, and she thought we might enjoy bicycling in it, which we did!

I got involved in stewardship and being an advocate for the Wissahickon when I was invited to be on FOW’s board in the late 1990s. The board at that point was heavily male and very much residents of Chestnut Hill, and they were interested in diversifying. They wanted to get more women on the board and they wanted to get people who lived in other parts of the city that adjoined the Wissahickon. So I was invited by Shirley Gracie to join the board, and I have never looked back. And then from that, I guess, my name got known, and when the Trail Ambassadors started in 2008 I asked if I could be a trail ambassador, and I was welcomed. And that has been a marvelous outlet. I have enjoyed every minute of that.

Having visited the park since the sixties, can you give us an idea of how the park has changed since the time you moved to Philadelphia?

Well, the number of people that come there is much, much greater – by several hundred percent, I think. When we first came to Philadelphia the Wissahickon was used pretty much by the people who lived in Northwest Philadelphia, both on the Roxborough and the Chestnut Hill sides, and it was nowhere near as crowded. There were people who rode there, I think there were more horses there then there are now. So that’s one of the big differences. And the stewardship of the park is much more formalized now. We now have a director and paid staff for the Friends of the Wissahickon that do a lot of work in conjunction with the city, but when we started using the park there were very few paid staff, the writing that was done on the Wissahickon was done by a couple long term Chestnut Hill volunteers that really had a sense of the oral history of the place, and I don’t think the Wissahickon Environmental Center at that point was staffed by professionals.

You were instrumental in developing FOW’s Trail Ambassador Walks and Talks series, and recruiting people for it. How did you get started on that?

About 1985, I took a National Science Foundation workshop for teachers that was offered at Chestnut Hill College. Half the day was to learn about computers, and the other half was to do earth science, and we had a couple of field trips down to the Wissahickon with some real-life geologists who you could barely understand because they seemed to speak a special language that I called “Geologese.” And there were three of us, three teachers who were in this area, who thought, you know, we really could interpret this for the common man without using the highly technical terms that were being used to teach us. The three of us started to walk in the Wissahickon and develop a little booklet, that we called Discovering The Wissahickon, on the geology of the Wissahickon and some of its ecology. It was a very small piece of work, but that’s what got me interested.

Later on, I thought that Trail Ambassadors could do more than just their regular patrols, and then we started to have information tables at places where there were fun things happening and every Sunday in front of Valley Green. I realized it was a real opportunity to help people get to know about the Wissahickon. I’d become most interested in both geology and history, and had developed a geology walk, so I put together a geology program and a history program. One winter we started giving those in Cedars, in those winter months where it would have been most interesting for folks to have something under a roof than to be out with the cold, and that led me to think, “Well, let’s get more people doing this.” We developed some outdoor programs, and at one point over the course of a year we were having over forty different trail ambassador walks. It wasn’t too hard to get my colleagues interested, and today that’s a major part of the program, that people come in and after a number of years they learn how to give their own programs in the Wissahickon.

That continues to grow to this day: last year we had about 120 trail ambassador walks and talks. It’s really impressive – you planted a seed that’s grown into something really beautiful, sharing and educating the public.

It’s been very satisfying to plant a seed that a lot of people have nurtured. And the variety of the programs over the years has increased – there’s meditation, there’s photography, there’s artwork, wildflowers, birds, a number of geology walks that people have been taking over for me, because it’s not safe for me to be doing that off the main trails anymore. I just have been delighted to see how people have taken the bait.

Do you have a favorite spot in the park?

You know, I don’t think I do. I like being near the running water, and for a long time one of my favorite places was the Toleration statue. The covered bridge is beautiful, and certainly the Fingerspan bridge is a very unique place to go, and I love the section between Northwest Avenue and Bells Mill Road, the granite quarry there, there’s so much to look at – I couldn’t pick a favorite place.

Final question: if there was one thing you wanted to share with people about the Wissahickon, what would that be?

Well, it’s a very special place. Philadelphia and its surrounding suburbs and really the whole area is lucky to have it, but it’s not going to stay taken care of by itself. There are all kinds of pressures to use that land for other things: at one time there was an effort to put a zip line in there, and efforts of people to take parts of it for development. So people have to pay attention, be part of the stewardship efforts, I think we all need to advocate for it. I would urge people to support the Wissahickon however they can, volunteering, being trail ambassadors, contributing money, participating in programs, and advocating for it with the City Council.

Thank you for speaking with us!

You can catch Sarah’s Geology of the Wissahickon Lecture LIVE at our Virtual Valley Talk on Wednesday, June 17. Stay tuned!