Home · Virtual Valley · Trails to the Past · Historic Rittenhouse Town 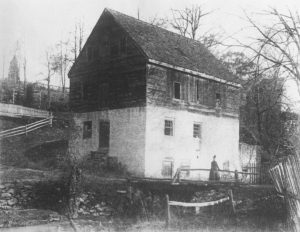 William Penn’s vision for the land we call Germantown was to make it a 17th century-style manufacturing hub.  To that end, he recruited Francis Daniel Pastorius, the founder of Germantown, and makers from England, Germany, and the Netherlands to participate in his grand experiment.  They were farmers of flax seed and wheat, weavers, printers and papermakers who traveled from the Old World to the New, from established cities and villages to what was then still a virgin forest where no town, no arable land, no church, no town center, existed until they made it.

William Rittenhouse was one of the makers who answered Penn’s call in the late 1600’s.  Born Wilhelm Rittinghausen (or Rittinghuÿsen) into a German family of papermill owners, he moved to Amsterdam, a beacon of religious tolerance at the time, converted to the Mennonite faith, married, and had a family.  In those days, a younger son like William stood no chance of inheriting the family business.  In his mid-forties, William took a wild gamble, uprooted his entire family and sailed across the ocean to a place he had never seen.  His dream was to build a papermill. 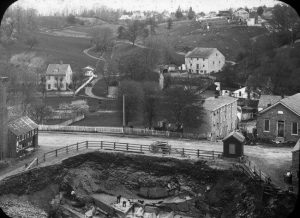 settling in Germantown to set up a trade printing Quaker books in 1685.  There were no papermills in British North America when he arrived in Germantown, which meant that all printing paper had to be imported from Europe.  Although we take it for granted now, there was no freedom of the press in England or its colonies back then.  Printers were tightly controlled through England’s Licensing of the Press Act 1662, which punished seditious and treasonable printing and the unlicensed printing of books and pamphlets.  In the late 1600’s, there were only 14 printers in the colonies (all but Bradford were in Boston).  The only newspaper allowed in the colonies was the London Gazette, printed in England.  In the 1600’s, Virginia shut down printing presses and prohibited printing outright.  Penn’s Pennsylvania, however, was a relatively free-thinking colony.  With a local papermill, Bradford would have a ready source of paper and could risk printing what he wanted to print in Pennsylvania’s more tolerant environment.  In a letter written to an unknown recipient sometime in 1690, Bradford wrote, “Samuel Carpenter [a landowner and close associate of Penn’s] and I are Building a Paper-Mill about a Mile from thy Mills at Skulkill, and hope we shall have Paper within less than four months.” 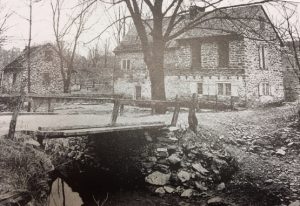 In 1690, Rittenhouse built the first papermill in North America on land near the Monoshone Creek, a little over a mile away from the early Germantown settlement.  For the next forty years, the Rittenhouse family were the only papermakers in the colonies.  Today, you can still see the homestead William Rittenhouse built and the bakehouse (built circa 1730) overlooking the creek.  Across the creek from the homestead stood the first papermill in America.  Destroyed by flood in 1700 and rebuilt by 1702, the Rittenhouse papermill provided a continuous source of paper for William Bradford and his son, Andrew, until the mill was repurposed as a textile mill in the 1800’s.  The first papermill in America was destroyed for good in the Victorian Era along with all the other mills that were planted on the Wissahickon.

Seventeenth century Germantown was full of weavers who brought linen rags to the Rittenhouse mill to make paper.  In his poem, “A Short Description of Pennsilvania…,” printed by William Bradford in 1692 (most likely on Rittenhouse paper), the early Germantown settler and Quaker, Richard Frame, captured the connection between the farmers who grew and harvested flax, the weavers of linen, and the papermill that turned linen rags into paper.  Click here to read the poem.

In its heyday in 19th century, Rittenhouse Town was a 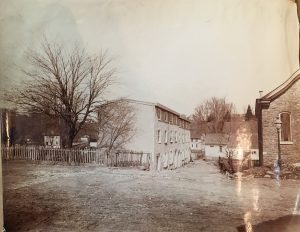 busy, self-contained, industrial community of about 40 buildings.  The town had several mills producing textiles, paper, rugs, and blankets or grinding grain, its own volunteer firehouse, schoolhouse, general store, smithy, Baptist mission, workers’ homes (some in Blue Bell Hill), and the McKinney Quarry (its remains are near the FOW’s new cycling trails in Saylor Grove).  As the steam engine replaced water as the source of industrial power, the old water-powered mills along the Wissahickon gradually became obsolete.  The City’s new Fairmount Park Commission, established in 1867 and charged with creating what we now know as Fairmount Park, began its 20-year project of taking the mills and land along the Wissahickon by eminent domain.  Rittenhouse Town fell on hard times – hardly anyone from the Rittenhouse family lived there anymore.  In 1891, the Fairmount Park Commission, which had taken ownership of Rittenhouse Town, demolished the Rittenhouse mills and most of the buildings that had fallen into disrepair.  The Rittenhouse family saved the remaining 7 house structures from destruction.  These are the buildings you see today. 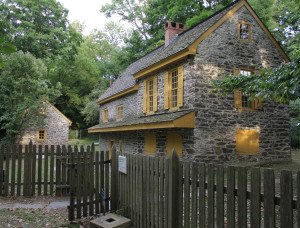 David Rittenhouse, William’s great grandson, was born at the homestead in 1732.  A self-taught mathematican, astronomer, surveyor, and engineer, Rittenhouse was a friend to Thomas Jefferson and Ben Franklin.  He was one of the leading American scientists of the eighteenth century, second only to Benjamin Franklin.

In the Battle of Germantown during the Revolutionary War, Washington commanded that every one of his officers and soldiers “have a piece of White paper on their Hatt,” to identify them as part of his army.  There being no other source of paper in the immediate area, it would appear very likely that the “White paper” the soldiers used was made by the first papermill in America.

Charles II, 1662: An Act for preventing the frequent Abuses in printing seditious treasonable and unlicensed Bookes and Pamphlets and for regulating of Printing and Printing Presses, Statutes of the Realm: volume 5: 1628-80 (1819), pp. 428-35. Available at: http://www.british-history.ac.uk/report.asp?compid=47336

Frame, Richard. “A Short Description of Pennsilvania[or], A relation of what things are known, enjoyed, and like to be discovered in the said Province [presen]ted as a token of good will[to the people] of England” (1692), Reprinted with an introduction by Horatio Gates Jones, Oakwood Press (1867), pp 13-17; 22-25. Available at: https://archive.org/details/ashortdescripti00jonegoog/page/n8/mode/2up

Green, James. The Rittenhouse Mill and the Beginnings of Papermaking in America, The Library Company of Philadelphia and Friends of Historic RittenhouseTown (1990).