Home · Virtual Valley · Trails to the Past · Fingerspan Bridge 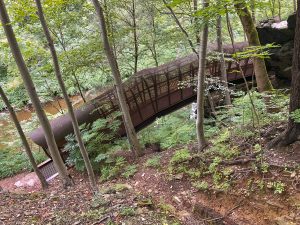 Seen from above, one can make out the “finger” shape of Fingerspan. (Photo: Bradley Maule)

As utilitarian works of art go, few reward their visitors with the layers of form and function that Fingerspan does. Jody Pinto’s first permanent work, the sculpture-as-footbridge guides the hiker across a steep ravine along the Wissahickon Valley Park’s Orange Trail — at the top of a stone staircase placed by the Works Progress Administration in the 1930s. In doing so, the steel finger makes references to both Philadelphia’s tradition of civic beauty and a timeless cornerstone of the art world.

Fingerspan arrived at its wooded location between Livezey Lane and Mt. Airy Avenue via helicopter, installed in six trips from Pachella Field in June 1987. But its arrival came by way of a seven-year journey with multiple reworks. In 1980, under the leadership of Penny Balkin Bach, the Fairmount Park Art Association (now the Association for Public Art) invited artists to participate in “Form and Function,” a project to populate public spaces with functional art for the City’s tricentennial in 1983. Out of the project, Philadelphia gained Martin Puryear’s Pavilion in the Trees in West Fairmount Park, Siah Armajani’s seating in the Fleisher Art Memorial’s Louis Kahn Lecture Room, and eventually, Fingerspan: the third version of Pinto’s vision for the Wissahickon. 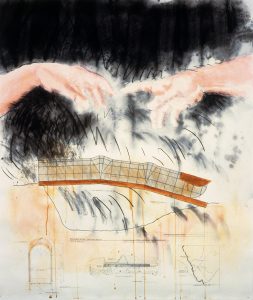 Initially, she designed Triple Split Tongue Pier, a pedestrian boardwalk and pier over the Livezey Dam, with three “tongues” — one directly over the dam, one cantilevered over the calm water above the dam, and another over the waters raging below the dam’s spillway. The concept aimed to preserve the dam by deflecting erosion from foot traffic. Ironically, the feasibility study deemed Triple Split environmentally unsound, and it was scrapped. (A “lite” version of the tongue pier was installed at Swarthmore College in 1980.)

Pinto learned from Friends of the Wissahickon and neighbors in Mt. Airy (where Pinto lived briefly in the early 1970s) that a deteriorating ravine on the Orange Trail needed stabilization. Her Arrowhead Perch, the second version, would have created a lookout platform over a sharp bend of the creek and replaced steep, aging stairs with a series of terraces. The Fairmount Park Art Association liked the piece as a work of art, but they felt it didn’t meet the functional requirements of the project.

With a definitive location and a blank canvas, her third effort took major inspiration from a major masterwork: Michelangelo’s Creation of Adam in the Sistine Chapel. Fingerspan’s final form recalls Adam’s slightly bent finger as God gives him life, mankind’s first breath. It signifies touch, the connection between body and land.

Architect and structural engineer Sam Harris, a founding partner of Kieran, Timberlake & Harris (now KieranTimberlake), helped Pinto achieve her artistic vision. His own experience as a helicopter pilot, including 600 rescue missions during the Vietnam War, helped inform the project’s dramatic installation. The footbridge deck came first, followed by the top of the “finger” in several parts. 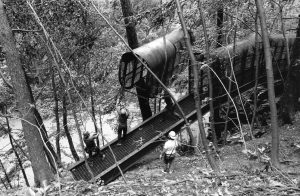 Fabricated of Cor-Ten steel in Pottstown, Fingerspan’s tunnel-like design is 59 feet long, 9 feet tall, and 4 feet wide. The rust fashioned by Cor-Ten’s weathering steel provides a coat of protection against corrosion; its dark brown hue harmonizes with the immediate surroundings year-round, much like the park’s bridges clad with Wissahickon schist do.

The structure’s grated footing allows its user to view the steep crevasse below, a startling 40 feet down to Wissahickon Creek. Thousands of half-inch holes perforate the “skin” of the finger, allowing air and light through the bridge; a “fingernail” is even placed atop the lower side of the span. A second, much smaller grated steel bridge sits at the low end of the WPA stone stairs, bridging a brook that trickles from a spring into the Wissahickon.

In the years since Fingerspan’s installation, Pinto has made public works in Japan, Israel, and across the United States. Locally, her work appears at the Philadelphia Museum of Art, Woodmere Art Museum, the Locks Gallery, and the Pennsylvania Academy of the Fine Arts, where she’s taught since 1978. In 1983, she was among the recipients of the Thomas Hazlett Memorial Awards for Excellence in the Arts in Pennsylvania, alongside author John Updike and architects Denise Scott Brown and Robert Venturi.

A less visible legacy Pinto has left Philadelphia exists completely outside of the art studio. In 1971, she founded Women Organized Against Rape (WOAR) to not only support survivors but also to effect change in the way victims were handled by police, hospitals, and courts. In 1973, WOAR opened its first rape crisis center at Philadelphia General Hospital, which became the model for similar centers across the country. Today, WOAR is an award-winning organization with a staff of 35 and over $2M in annual direct services. 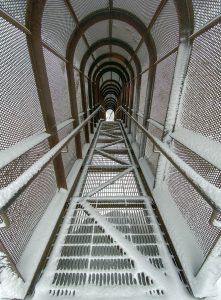 A coating of snow always paints Fingerspan in a monochromatic and photogenic scene. (Photo: Bradley Maule)

Jody Pinto’s distinguished body of work adds to her family’s story — a story of artists and immigrants. All of it comes together at Land Buoy, dedicated in 2014 on South Philadelphia’s Pier 53, where boats unloaded European immigrants seeking a better life in America — immigrants including the Pinto family.

Jody’s grandfather Luigi Pinto brought his family to Philadelphia from Italy in the early 1900s. They were processed, as were all immigrants, at Pier 53 (now Washington Avenue Pier), “Philly’s Ellis Island.” Luigi was a card-carrying vendor at South Philadelphia’s Italian Market, selling fruit from a horse and cart along 9th Street, where he and his wife raised their family. His sons Salvatore, Biagio, and Angelo (Jody’s father) developed an early passion and skill for art, and as young adults they became star pupils of the Barnes Foundation’s art education program.

Albert Barnes personally provided scholarships to the brothers to further their work, including trips to Europe for them to paint and study with Henri Matisse. All three have works in the permanent collection of the Barnes Foundation, and Jody’s father Angelo was the staff photographer at the time Barnes died. When the museum relocated to the Ben Franklin Parkway in 2012, Angelo’s 1951 photos of each gallery served as reference points to get the new museum right.

Angelo Pinto saw to it that Jody and her siblings — a curator, a painter, and a calligrapher — grew up in the arts, in the “theater of New York City,” as she describes it. But her time in Philadelphia has played a formative role in the development of the style she describes as the “integration of art into architecture and landscape.” At Land Buoy, her art-as-architecture recalls the mast of a ship transporting immigrants to a new land, with a spiral staircase leading to a crow’s nest with a view of the Delaware River and Pier 53.

But perhaps no single piece of Jody Pinto’s art speaks that language as eloquently as her first permanent work. Fingerspan integrates art, architecture, and landscape — form and function — to craft an unforgettable, dramatic, and photogenic experience in the heart of the Wissahickon.

Check out this virtual hike to the Fingerspan Bridge with Trail Ambassadors, Debbie Hoellein & Jim McClory!