Home · News · History · Up At The Tree House

Up At The Tree House 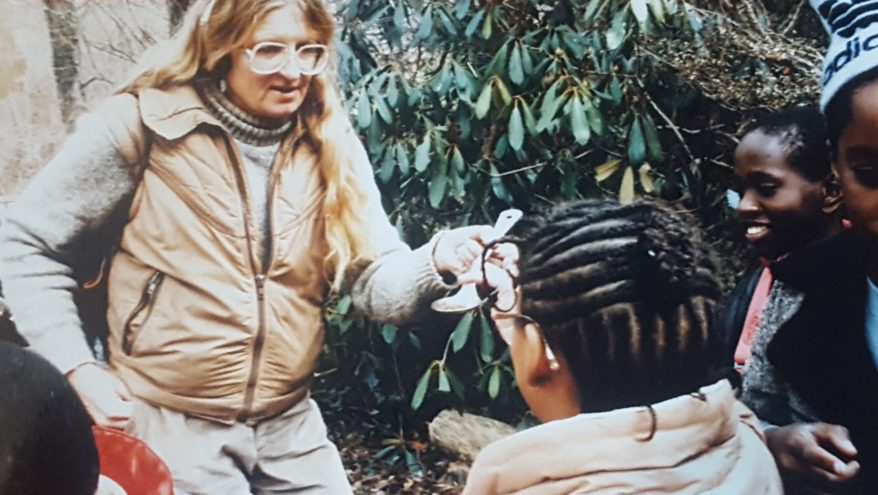 Sioux Baldwin, the first teacher-naturalist and founder of programming at the Tree House, passed away last year from leukemia, but her legacy lives on in the impact she has had on Wissahickon Valley Park and on the people who remember her frequently and fondly.

Her career at the Tree House spanned 20 years, beginning in 1980 when it first opened as a visitor center. Sioux was asked by Dick James, then executive director of the Schuylkill Valley Nature Center, and Eleanor Houston Smith, who sold the former Andorra Nurseries property to Fairmount Park, to start a nature center on the new grounds known as the Andorra Natural Area.

“The concept was to hold free programs for people of all ages. She eagerly took on the job and was soon leading daytime and nighttime walks on the trails near the Tree House, using her prodigious knowledge to educate the public about nature,” said Judith Gratz, Sioux’s longtime friend.

“Sioux was an outdoorswoman of the first order. She knew all the area’s mammals, the flowering and nonflowering plants, the trees, the fungi, the birds, the reptiles, the amphibians. She was thorough in her knowledge, even being able to show people where these could be found. She would teach about the special niche that flora and fauna held in the natural world, and why that is important to us.”

In 1980, when the city was about to drop its purchasing option on 22 acres of Andorra Meadows, Sioux was instrumental in rescuing this parcel of old farmland from development. She also persuaded the City to purchase additional land extending to Bell’s Mill Road, increasing the Andorra Natural area from 100 acres to the current 210 acres.

Sioux founded one of our most popular events, Maple Sugar Day. This was probably the first one to be held at a nature center in this region, and it continues to this day. Thousands of children and adults have learned that real maple syrup is made from the sap of the maple tree. The years of old tapholes in the trees we tap each year tell a tale of 35+ years of tapping.

She held “unspooky” Halloween walks in the woods, gave talks at libraries, historical societies, conferences, other nature centers, and much more. She led the trolley tours along Forbidden Drive that ran for many years, during which she taught the history of the valley through her skilled use of storytelling. All this and she sang with the Philadelphia Singers as well!

When her husband’s post-polio syndrome advanced, Sioux decided to retire. According to Judith, they moved away to the Endless Mountains for a simpler life. She became active in that community, volunteering at local nature centers and continuing to sing with various groups: an opera company, a Russian chorus, and a madrigal group.

In 2017, Sioux passed away from leukemia. She is sorely missed by her many friends who know they will never again go hiking, birding, paddling, exploring, or just sitting and reading with this remarkable woman.

Everyone seems to have stories about Sioux. Even today, 18 years after her retirement from Fairmount Park, visitors to the Tree House relay their memories of her. When I started working here, I was asked, “Are you the new Sioux?” A woman larger than life. No, I cannot be compared to Sioux.

“Many children who are now adults were positively influenced by Sioux’s knowledge and programs and all that she shared through the years,” Judith said.

And for the children and visitors that still find the Tree House a special place to this day, I say thank you to Sioux for starting it all 38 years ago.

Save the Date for Maple Sugar Day 2019! Help continue the tradition and join us on Saturday, February 26 from 11 am-3 pm on Forbidden Drive near Northwestern Avenue.