Tired, Dirty, Happy, and Satisfied: Just Another Day Working in the Wissahickon 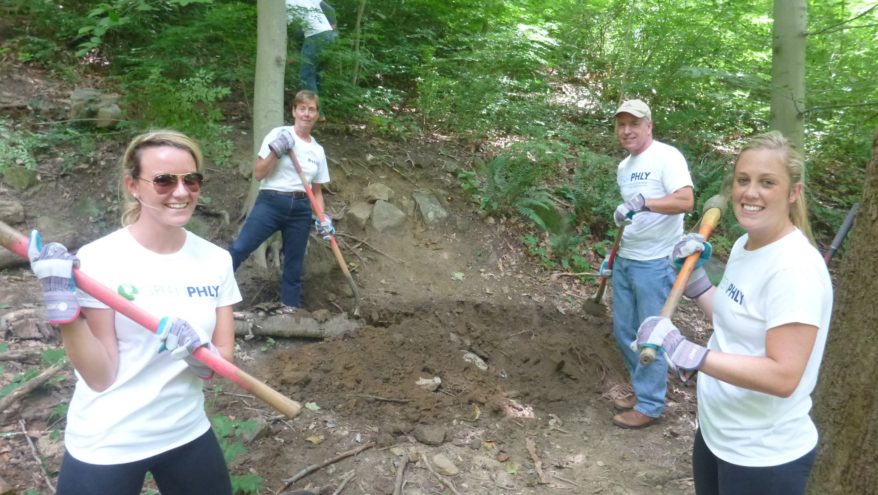 by David Dannenberg, FOW Board Member and Crew Leader.

You would be amazed how much work it takes to keep the place natural.–James H. Welch.

In October of last year, I had the opportunity to help with a continuing restoration project in the very heart of the Wissahickon. It was a lovely day, intermittently muggy and then pleasant when an occasional cool breeze broke through the foliage. Few leaves had fallen and fewer showed color, other than various shades of green. The only hint of the fall season was the somewhat oblique angle of the sunlight.

We were planning to put the finishing touches on the (hopefully) final phase of what had become an ongoing erosion mitigation and forest restoration project. There were seven of us. Our team consisted of Tom Witmer, assisted by Curtis Helm and Tom Dougherty, all from Philadelphia Parks & Recreation (PPR). (They represent over 50% of the employees of PPR’s Natural Resources for Urban Forestry and Ecosystem Management Division, the team responsible for ecosystem management—including conservation preservation and restoration—of all 5,600 acres of naturalized parkland in Philadelphia.) The group was rounded out by Luke Rhodes, Project Coordinator for the Fairmount Park Conservancy, John Holback, Volunteer Coordinator for FOW, Jared Bundra Crew Leader for FOW, and myself, an FOW Crew Leader and Board member. (Crew Leaders are volunteers who undergo training so they can work directly with our Volunteer Coordinator to help plan and lead volunteer workdays throughout the park. Learn more here.)

A Short History of the Worksite

Just south and west of Valley Green Inn (downstream on the Roxborough side) there used to exist a gully so enormous that it constituted its own sub-watershed. It stretched from Forbidden Drive all the way up to the Yellow Trail at the rear of the PPR District 4 Headquarters on Henry Avenue. The gully was 1,000 feet long, 10 feet deep, and growing.

In 2012 this gully was reclaimed by PPR in partnership with FOW, the Pennsylvania Department of Environmental Protection, and the Philadelphia Water Department (PWD). Basic reclamation took several weeks and involved the use of machinery, hand tools, and 23,000 tons of material. Additionally, an enormous amount of work was conducted upslope of the gully to manage the source of the erosive stormwater.

These very aggressive and well-considered mitigation strategies were tested by large storms that proved the project less than 100% successful. Erosion began again in a couple of areas. Our current work was to complete a more aggressive attempt to halt the problem before another huge gully formed.

The Project at Hand

The project was started during the previous week with the somewhat arduous installation of heavy, awkward erosion control devices provided by PWD. Our task this week was to complete the job. We planted 39 shrubs, sledge-hammered stout oak stakes into the ground to further secure the erosion control barriers, and installed natural barriers to discourage park-user access. Signs were added later to explain to visitors why walking across the reclamation zone damages the habitat.

It was not a simple task to plant several dozen shrubs on a 35% slope. The ground was slippery with mud and extremely rough with potentially ankle breaking logs, rocks, and holes. The plants were heavy and awkward. Full, five-gallon buckets of water splashed on us as we carried them to the shrubs. Care had to be taken not to damage existing plants or create new paths for erosion simply by repeatedly traversing the slope in the same place. Devil’s walking stick, planted in the area to discourage pedestrians traversing the site, is covered with nasty thorns that have a tendency to break off below the surface of one’s skin.

At times the weather was hot.

There was poison ivy.

We got some exercise and we accomplished something tangible. We were a hardworking group of people possessed of both brains and a sense of humor. We will be able to see the fruits of our labor for years to come as the shrubs grow, as (we hope) the erosion ceases, and as the open sore across the forested slope is healed and the area is recolonized by the forest.

I biked home tired, dirty, happy, and satisfied. You could do the same. Join FOW on a workday or help make it happen for others by making a contribution to FOW to pay for tools, staffing, plant material, and equipment. FOW’s next volunteer workday is October 15. Click here for more information.

By David Dannenberg, FOW Board Member and Crew Leader