The Perks of Poison Ivy? 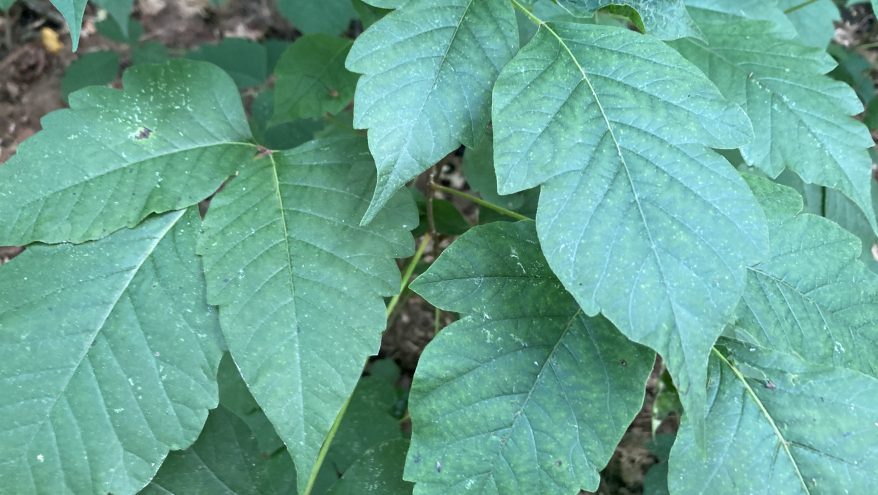 “Leaves of three, let them be.” While poison ivy isn’t the only three-leaved plant out there – box elder, blackberries, and raspberries are all often confused with it – it’s good to keep this folk wisdom in mind during the summer in Wissahickon when the plant is at its greatest extent!

From a safe distance, though, there’s a lot to learn and maybe love about this often misunderstood plant in the park. First, despite the name, it’s not really an ivy: poison ivy (Toxicodendron radicans) is more closely related to the cashew and pistachio family. The three-lobed leaves are one of its most identifiable characteristics, but it also relies on its hairy vines and extensive root system or rhizome to reproduce. And, of course, all parts of the plant contain urushiol, a clear liquid compound in the plant’s sap that causes the characteristic poison ivy rash.

What’s the upside to this urushiol-spreading plant? Poison ivy is a native plant, meaning it was common in local forests before European colonization. Because it’s been here a while, it is a food source for many local species who aren’t allergic like humans: mammals like chipmunks and deer eat the leaves, and its seeds and berries are a particularly valuable snack for songbirds in late fall and early winter. Unlike English ivy (Hedera helix), a common invasive in the park that chokes off trees with extensive growth, poison ivy also generally sticks to its favorite spots in the forest, edge areas where the tree line breaks and allows sunshine to filter through.

Poison ivy is hardy in the heat, too, which means it’s on its way to playing a bigger role in the Wissahickon woods. With hotter summers and more extreme weather due to climate change, in the following decades some of the cold-weather plants in the park will become less common (like eastern hemlocks and sugar maples) and be replaced by plants less familiar to local wildlife from forests to the south. But as the local forest composition shifts, you can still expect to see plenty of native poison ivy to feed hungry animals in the park and keep the ecosystem going.

Still, while it’s good for local wildlife, more poison ivy means more rashes for people! According to the CDC, when exposed to 50 micrograms of urushiol, an amount that is less than one grain of table salt, 80 to 90 percent of adults will develop a rash. Your best bet in avoiding a rash is to be aware of where poison ivy is and not to touch it, so take precautions like wearing long socks or pants if you’re hiking. If you do come into contact with poison ivy, your first priority should be getting rid of the urushiol oil on your skin, with dish soap and water. Another common native plant in the Wissahickon offers some relief – Jewelweed has orange or yellow flowers, often grows next to poison ivy, and has some healing power over exposure to poison ivy and stinging nettles.

Next time you’re in the park, remember “leaves of three, let them be” and keep an eye out for this important and occasionally irritating plant!