Home · News · News · Take a History Hike in the Wissahickon

Take a History Hike in the Wissahickon 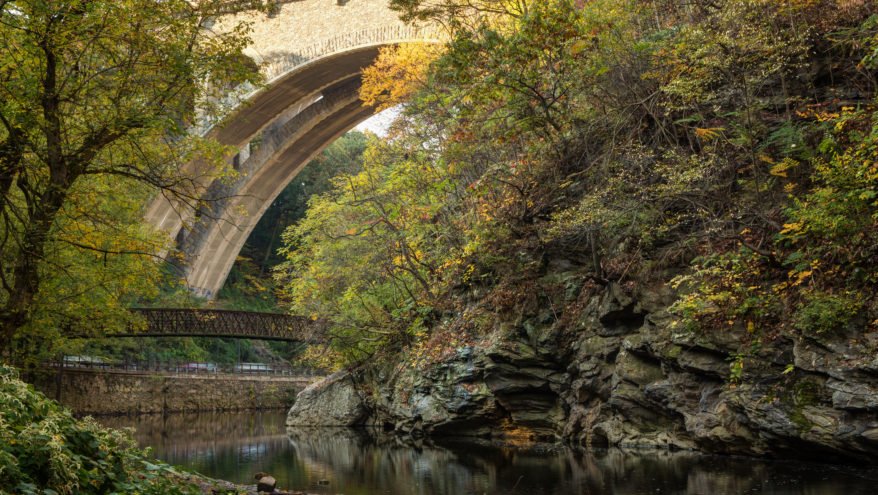 From the late 1600s through the late 1800s, Wissahickon Valley Park was a bustling, industrial hub dotted with mills, inns, and roadhouses. Historic RittenhouseTown is a beautiful representation of this historic era and a great place to start a hike through Wissahickon history.

Located in the Germantown neighborhood, you can reach this site easily by car, bike, or SEPTA. We recommend visiting the Historic RittenhouseTown website here: http://rittenhousetown.org/contact/directions-contact/ for detailed directions and information on hours of operation and tours.  The Paper Arts workshops are a real treat and not to be missed!

After taking in the sites at RittenhouseTown, follow the concrete path along Lincoln Drive for approximately a half mile to Forbidden Drive. You will pass through Ten Box, built in 1940 by the Works Projects Administration (WPA). It was a shelter for the Fairmount Park Guards who once patrolled the park by foot, horse, and bike. Each shelter had a telephone and wood or coal stove.

Cross Forbidden Drive and continue along this concrete path for about a quarter mile, over the Wissahickon Creek and under the Henry Avenue Bridge to reach the beginning of the Yellow Trail on the right.  Also known as the Wissahickon Memorial Bridge, the Henry Avenue Bridge was built to potentially accommodate a trolley or subway line running underneath, but these plans never came to fruition.

Head uphill on the right, where a steep climb up the Yellow Trail brings you to the area known for the Hermitage Mansion and Hermit’s Cave. Make your first left and in about a tenth of a mile you will reach Hermit’s Cave where Johannes Kelpius, a German-born mystic and leader of a small religious group, was said to have meditated. His followers moved into the Wissahickon wilderness in 1694 to prepare for the end of the world and the Last Judgment.

Hike back to the Yellow Trail and take the next left to reach the Hermitage Mansion, a house built in 1848 on historic ground occupied by the Rosicrucians, a religious sect comprised of hermits or Pietists, who emigrated from Germany in the 1600s. Read more info about this historic building here: http://fairmountparktrust.org/lp-hermitage.php

Head back to the Yellow Trail and under the Henry Avenue Bridge once again, and in a quarter of a mile you will reach Lover’s Leap, a beautiful lookout point. Legend has it that George Lippard, a nineteenth-century novelist may have been married here in the moonlight in 1847. Make your first right and in a little less than a half mile you will reach Forbidden Drive again. Make another right and cross over the Blue Stone Bridge, built in 1896 and originally known as the Old Red Bridge or the Lotus Inn Bridge. This bridge was once the principle by-pass route around Philadelphia between New York and Baltimore.

Continue along Forbidden Drive for about a quarter mile and you will see a plaque on the left commemorating a skirmish between British and colonial troops on October 4, 1777, before the Battle of Germantown began. The event is reenacted annually on the first Saturday in October at Cliveden, an historic house on Germantown Avenue near Upsal Street.  Read more about that here: http://www.cliveden.org/revolutionary-germantown-festival/

Turn left at Ten Box and follow the concrete path along Lincoln Drive to return to Historic RittenhouseTown, your starting point.