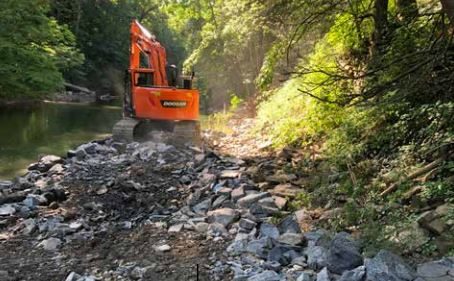 Despite the intense storms, high heat, and stifling humidity the summer of 2019 gave us, FOW’s Forbidden Drive Streambank Stabilization Project is moving steadily along. RiverLogic Solutions has completed the stabilization process at the Valley Green Area site, the first of the three locations scheduled to be remediated over the summer. Project contractor and company co-owner Jeff Boyer and his crew successfully constructed a streambank rebuilding technique called soil lifts. Using both heavy machinery and people power, materials such as stone, soil, coir logs, and erosion control matting were installed to re-establish the creek bank, and ultimately, this portion of Forbidden Drive.

In order to complete this portion of the endeavor, the RiverLogic crew first established a causeway, beginning from Forbidden Drive’s eroded bank edge down to the creek. This allowed the crew to use the heavy machinery in strategic locations along the creek bank to move large stone and soil, thereby creating a base for the cascading soil lifts. As each soil lift was completed, the team compacted and tested the soil to ensure proper stabilization. A variety of grasses, wildflowers, and native seeds were distributed on the completed soil lifts to prevent eroding soils in the future. The use of native species, which thrive in this environment, to re-establish vegetation on the creek’s banks, supports local insects, birds, and other wildlife while promoting the FOW mission. The finishing touches were completed by removing the causeway, reshaping the bank’s edge, and replacing the split rail fencing.

The crew is currently in the first stages at the second project location site immediately downstream from Mt. Airy Avenue and Forbidden Drive. Visitors to the park are welcome to watch this extraordinary project unfold and take photos from safe locations—the Mt. Airy Bridge at Forbidden Drive is a safe spot to stand for a close-up view of the construction progress.