Messing About With Big Rocks 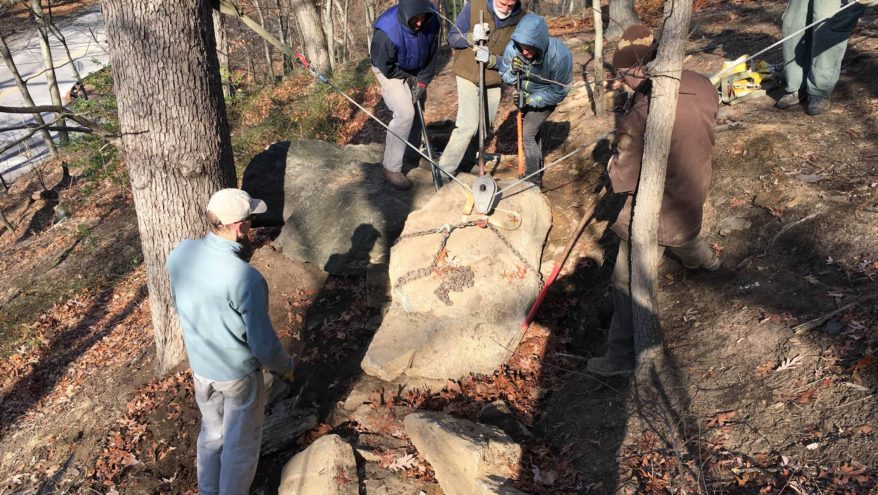 A man who carries a cat by the tail learns something he can learn in no other way.–Mark Twain. 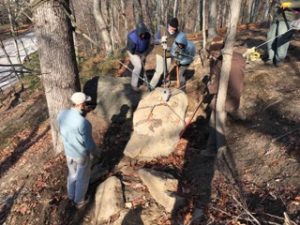 I could wax rhapsodic about stone. In fact I have. Almost everything on earth began as rock, and the vast majority of the planet’s mass still consists of rock. In essence everything either is, or is derived from, rock. All the stuff that we luxuriate in is merely thin veneer over a big rock pile. So to work with stone is to work with the most basic material of the world. It is also to engage in an endeavor as old as our species.

Human beings have been manipulating rock to our advantage since prehistoric times, a period long referred to as “The Stone Age.” Rockwork is probably encoded into our DNA. Heck, arguably our DNA is rock. Wissahickon Valley Park is, to borrow a phrase from Chuck Berry, made of earth and wood, a concept that on a geologic timeline is redundant for reasons already mentioned. Since the days of our barely post-knuckle-dragging bipedal ancestors, to work with rock is also to work with some of the heaviest material in the world.

Something in the human brain located deep down in the stem—adjacent to the parts that control breathing, blinking, and running from saber-toothed cats—compels us, upon seeing a very large object, to control it. This instinct has led the human species to great achievement as well as to great folly. We puny humans have killed and eaten woolly mammoths to extinction. We have reversed rivers. We have replicated the mechanism that powers the sun and hurl it at one another. That same instinct to move big things has also led me personally to great achievement as well as great folly—in the Wissahickon.

Over the last two decades, I have worked with other FOW volunteers in the design and execution of many projects in the Wissahickon utilizing stone. For most of these projects, we have used the “native” rock, Wissahickon schist, and not just because it is often available on site (a practice we want to abandon so as to limit disturbance). We use schist for other practical reasons as well. 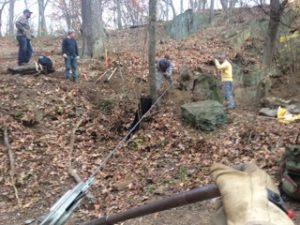 Despite its workability, schist is durable and aesthetically appropriate. While the best lumber will decay within a generation, rock will outlast us as a species. And indigenous Wissahickon schist, being the stuff the park is grounded on, looks appropriate in situ.

Should structures built of schist disintegrate, what remains will look like a natural aspect of the landscape. This cannot be said of steel, dimensional lumber, or plastic. When objects made of these materials disintegrates, what remains looks like (and is) trash. Because the man-made structures in the Wissahickon (built during its past role as the “Ruhr of the New World”) were made of schist, their remains mostly disappear from view. Over the last 150 years, the vestiges of mills, roadhouses, and homes have blended into the landscape from which they were riven.

When we volunteers first worked with stone in the Wissahickon, we limited ourselves (as in the original specifications for reinforcing stone in the construction of Walnut Lane Bridge) to “rocks as big as a man [or woman] can carry.”* However, thanks to the relentless power of our brain stems, we have been driven to utilize ever bigger—and heavier—rocks in our work. 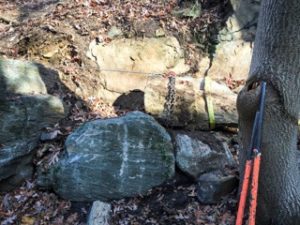 Actually, it is not merely the brain stem at work. In theory, one large rock can do the work of many small ones, and once in place, large rocks are less prone to movement than small ones. For example, over ten years ago, we made a small bridge out of a single half-ton stone. With a cast-iron come-a-long, we yanked it out of the side of a hill and dragged it across two digging bars to place it over a gully. It remains there to this day carrying horse, bicycle, and pedestrian traffic.** 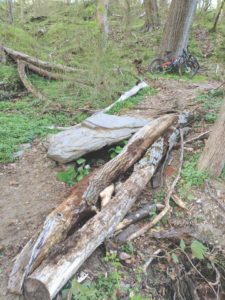 But sometimes it really is brain stem motivation, and therein lies much opportunity to learn and much opportunity for folly. The child in me likes to be able to point to an enormous, beautiful rock and say, “See that thing the size of an office desk? We put it there. Without any help from Mommy and Daddy!” Or from gas engines or hydraulic motors, for that matter. But it is just not the Luddite within that motivates us to eschew the internal combustion engine. 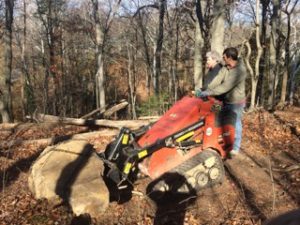 We certainly are not above using machines to move large, heavy things. We roll big logs with a couple of peaveys, but we can—and do—effortlessly drag entire downed, mature trees with a chain hooked to a four-ton truck in four-wheel drive low gear. And a tracked skid steer moves a one-ton stone much more quickly and easily than our hand tools. But that kind of stunt only works in places where it is feasible to get machinery to the work site. For all other locations, there are hand tools.

Given the topography of the park and limited resources, we do much of the heavy work with old-fashioned tools and compact, manually operated machines, plumbing the limits of what can be d 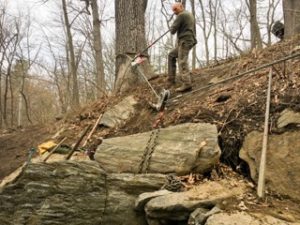 one by hand with mechanical tools and short experience. Some of us have taken rigging workshops, others have read rigging treatises, and we have all toiled studiously at the “Old School of Trial and Error.” We have managed thus far to stay safe, not break anything terribly valuable, and even create several useful and reasonably good-looking features. We have also devoted man-days of labor ineffectually trying to nudge a single boulder less than a yard’s distance.

So, on-and-off since last fall, a few of us have been struggling to hand build two short sections of trail out of rocks that weigh as much as 3,800 pounds each. The challenges of moving and placing these behemoths are many. In our experience, rocks up to 400 pounds can be nudged pretty effectively by a couple of people with long steel rock bars. Not so for rocks three times that weight or heavier. We move these rocks by wrapping them with chains and/or straps and pulling and lifting them with hand winches—either griphoists or power pullers, or sometimes both—while prodding them with rock bars and using the direct force of hands and feet.

It isn’t just the rocks that are heavy—so is the equipment, all of which must be transported to the worksite on our backs or in our hands. FOW’s largest griphoist, which theoretically enables a lone human to deadlift up to 6,000 pounds, weighs 65 pounds; its cable and handle weigh an additional 30 pounds. And we must also manage the non-trivial weight of chains, straps, blocks, rock bars, snacks, and lunch. 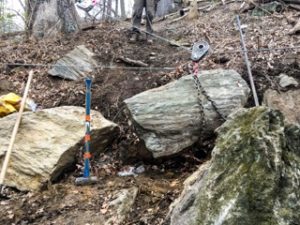 Further, because we are limited by the juxtaposition of anchor points (trees) for our winches, as well as the locations of the rock to be moved and their destinations, we often have to relocate and reset our rigging several times just to move an object a matter of a few yards, or even just to flip it over or turn it around. Moreover, this particular project has been conducted on a slope of over 30 degrees. It can be very frustrating, but in the end it is very satisfying—most of the time. There are days when we feel we did not accomplish anything other than a decent outdoor workout and create a lot of dirty laundry. 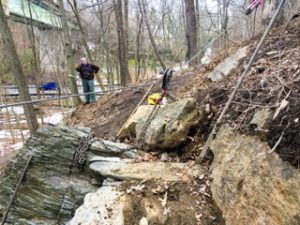 Moving rocks in this manner provides invaluable lessons. The first is humility. Sometimes I am forced to conclude that we just aren’t very good at this. I shudder to think what professional trail builders would think of our efforts. And I marvel at the barely fathomable accomplished feats of pre-industrial peoples—the Egyptian pyramids or Incan architecture, which is arguably the most stupendous rockwork of all time. Our work is  embarrassing by comparison.

I remember reading in a history textbook that during the Middle Ages it was believed that the monumental ruins of ancient Rome were constructed by a vanished race of giants. Now I understand why. And those ancient peoples had no hand winches or steel bars to help them move rocks! But, in fairness to ourselves, we don’t have the number of laborers, the patience, or the same goals.

If our work looks less finished, it also looks more natural. And we are confident that it will hold up to its intended use. Moreover, we sincerely hope that in the future, lichen an 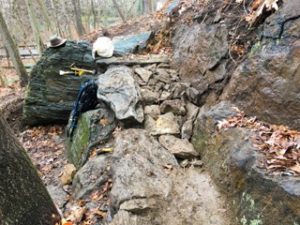 d moss will make our biggest rockworks look like they were conveniently placed by random acts of nature to support a trail where we wanted a trail. No one will think that the Inca constructed this (see photo on the left). But maybe they will think it was always there, traversed by people since before Columbus.

The second valuable lesson is a very deep appreciation for the miracle that is modern hydraulic machinery. A rock that we put a dozen man-hours into moving a few yards could be picked up and delicately placed into position by a skilled operator with an excavator in under five minutes! Indeed, it is with excavators that large projects in the Wissahickon have been accomplished (by contractors), and I long to learn to competently operate one myself. Yet, as long as there are places where it is too difficult or expensive to use an excavator, there will remain a need to do this work by hand. 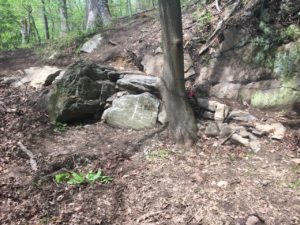 We hope over time to become more efficient and better at it. And as much as we want our work to blend into the landscape, we secretly hope that occasionally people will notice it and be impressed. In short, moving big heavy rocks by hand has taught us lessons in efficiency, pride, body mechanics, cooperation, and appreciation–for the labor of the ancients and powered mechanization. Withal it remains a primeval fulfillment to move an object that weighs 20-50 times as much as oneself. And in the end, by whatever means, we hope to make the park more beautiful, useful, and fun for everyone.

by David Dannenberg, FOW volunteer and former board member

*It is true. A PennDOT engineer said at a public meeting that the original specification for the Walnut Lane  Bridge, which when built was the largest concrete bridge in the world, was to build it out of “concrete reinforced with stones as big as a man can carry.”