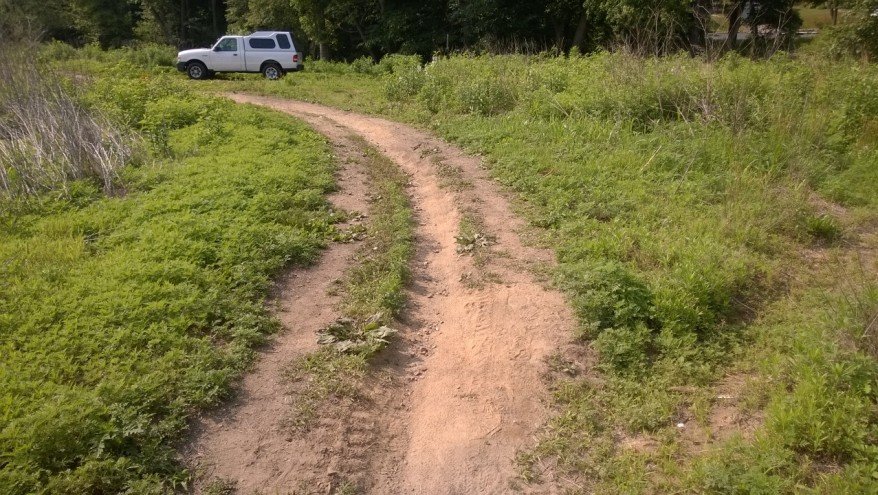 In the summer of 2015, FOW restored a segment of the Yellow Trail that runs from Houston Playground to Courtesy Stable. This particular segment was only a few years old, but a perfect storm of conditions was causing it to rapidly erode. Moreover, reduced sight lines from encroaching meadow plants were contributing to dangerous conflicts between cyclists and equestrians who could not see around bends in the trail.

Why so much erosion in a short amount of time?

Houston Meadow has uncharacteristically sandy soil that lacks the clay and gravel material we find throughout the rest of the park. While there is no “ideal” type of soil for use as a trail tread, predominantly sandy soils are generally avoided. Due to its physical properties, clay is a good soil binder. When dry it is extremely hard and resistant to erosion. Gravel and rocks tend to increase the ability of a soil to resist shear forces and, partially because they are heavier, resist displacement or movement.

Soil is also displaced by rain. By definition, meadows have a low percentage of tree canopy. Trees protect trails from splash erosion—erosion caused by drops of water hitting bare soil—by slowing down and intercepting rain before it reaches the ground.

Well-built trails are carefully engineered to shed water and provide a stable tread, but excess soil displacement can change the shape of the trail enough to destroy these properties. Splash erosion, sliding bicycle tires, and clomping hooves all likely contributed to the quick displacement of soils on the Houston Meadow trail and to the formation of numerous troughs with bermed sides. Once formed, the troughs concentrated stormwater flows lead to increased erosion. In just a few years, large sections of the trail in Houston Meadow had become deeply eroded.

How did FOW restore the trails?

To begin, sight lines along the trail were aggressively cleared. Increased sight lines decrease the likelihood one park user will crash into another, and diminish the need to change speeds quickly. Slamming on brakes or moving a horse quickly to avoid a collision are both factors that increase soil displacement and contribute to a bad trail experience.

Next, FOW built a series of terrace steps out of black locust, a naturally rot-resistant material harvested from the park. These steps serve two very important functions. First, they minimize running trail grade or reduce the steepness of the trail. The steeper a trail is, the more likely it is to erode, with the potential for erosion increasing exponentially with trail grade. Second, the steps hold the trail tread in place, acting as dams to limit the movement of soil along the trail, especially during rain events.

Finally, FOW imported material containing higher percentages of clay and gravel and used this to reform the trail tread. This new material should be more resistant to displacement, although the trail will likely require some maintenance over the years to replace displaced soils if the trail continues to see high levels of use.