Gems of the Wissahickon 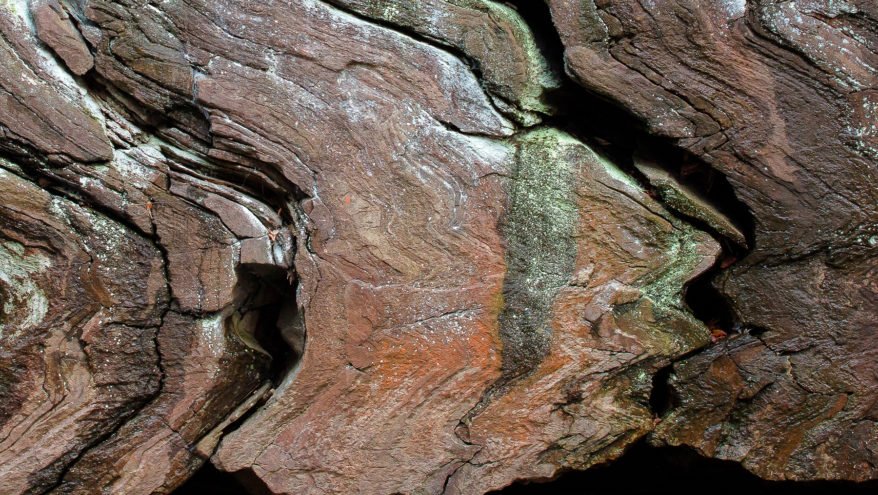 West is a long-time FOW member,  former FOW Board Member, and a current Trail Ambassador.

The location of the Wissahickon Gorge in a major urban-suburban region makes it an ideal site for environmental education including geology. In the Wissahickon, one can learn to identify common rocks and minerals and read the story contained in metamorphic rocks. Geological features in turn determine types of flora and fauna­ and ultimately shape human activities in a given location.

Philadelphia’s Wissahickon Gorge belongs to the Piedmont Province of Pennsylvania, a strip of sloping land rising from the Atlantic coastal plain between New York and Alabama on the eastern side of the Appalachian Mountains. The Piedmont zone consists of Precambrian and lower Paleozoic rocks, the oldest rocks in Pennsylvania. The Wissahickon Creek and its tributaries pass through  four geological regions including the Newark Basin of Triassic sandstones and shales, Chester valley carbonate limestones and dolomites, across the Huntingdon Valley shear zone, and  finally into the Wissahickon formation where its waters merge with the Schuylkill River.  In its last 7 miles, the Wissahickon stream drops over 100 ft in altitude.

Once buried 25 kilometers below the surface, Wissahickon rocks provide evidence of the powerful tectonic forces that can close oceans and build mountain ranges. At one time geologists hypothesized that Wissahickon rocks were part of ancestral North America, but a major fault, the Huntingdon Valley shear zone, abruptly separates Wissahickon schist from very different rock types to the north. Structural features within the Huntingdon Valley fault suggest that the metamorphic bedrock underlying Philadelphia came from another location to the northeast.

The concept of terranes, developed in the study of west coast geology, offers a plausible explanation of the origins of Wissahickon rocks. They may have been part of a mountainous land  mass far older than the Appalachians that had rifted from another continent and traveled with the oceanic crust.  During 250 million years of activity along a converging plate boundary numerous small microcontinents, including the ancestral Wissahickon, torn from their earlier locations became firmly welded to the North American coastline as an ancient ocean closed. We can see a similar process happening today in the Mediterrean which  gives a current example of a closing ocean.

THE STORY IN WISSAHICKON ROCKS

The history of the Wissahickon’s aluminum rich schist and quartzite began with the weathering and erosion of an ancient continent in a location yet undetermined in Precambrian times. Aluminum is concentrated in clay by water reacting with feldspar, the major component of granite. These ancient clays and sands were carried by flowing water and eventually collected at the margins of continents, in deltas, on floodplains, or in shallow inland seas where they were compressed by the weight of overlying layers and consolidated into the shale and sandstones that eventually were transformed into schist and quartzite. It is possible that these sediments contained fossils, but subsequent metamorphism destroyed them.

In numerous places in the Wissahickon we find interlayering of schist and quartzite suggesting that the original shale and sandstone sediments were sorted by particle size during a long period of deposition. Fine clay particles settle out in still, almost motionless water, but heavier sand particles can be deposited in moving water. If the motion of water in a given location differed over time the structure of the resulting sedimentary rocks could show alternating layers of sandstone and shale.

Sometime after their formation the proto-Wissahickon shales and sandstones began to undergo metamorphism, slow solid state chemical reactions which require temperatures in the range of 200-8000 Celsius. Although no melting occurs, atoms can regroup by diffusion into new crystal configurations producing chlorite, muscovite and biotite mica, garnet, staurolite, kyanite, tourmaline, and sillimanite, all aluminum rich silicate minerals embedded in different types of Wissahickon schist. These embedded minerals are called index minerals because they reveal the conditions of metamorphism.

The specific minerals found in rocks depend on a combination of temperature and pressure during metamorphism. Different minerals are favored to grow under different of temperature & pressure which increase with depth. For example, chlorite forms in the range of temperatures 1000-5000 C.  Muscovite forms in the range 200o-625o C; biotite forms at 275o-675o C; garnets at 475o-750Co, and staurolite at 525o-725o while sillimanite requires temperatures over’ 600o. To read the story in metamorphic rocks geologists use this Barrovian sequence of index minerals. The sequence of these index minerals in Wissahickon schist (biotite, garnet, staurolite, kyanite & sillimanite) indicates that pressure increased along with temperatures during metamorphism giving us clues to the depth at which the process of metamorphism occurred.

The conditions which produce sillimanite from kyanite are found at depths of about 20-25 kilometers. For these Wissahickon rocks to be exposed at the surface 20 kilometers or more of crust must have eroded away. The thickness of the remaining crust in this location is 30 Kilometers indicating that metamorphism must have occurred in an ancient mountain range where the crust was at least 50 kilometers thick.

During an ancient period of mountain building shales and sandstones were buried deep in the crust. Heat and compression converted the shale first into slate and then into schist. Deformation produced the folds and minute crinkles, crenulations, seen within layers of schist. Simultaneously the sandstone was converted into quartzite. 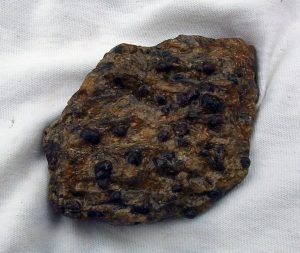 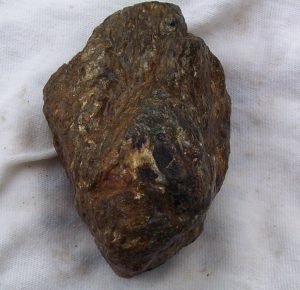 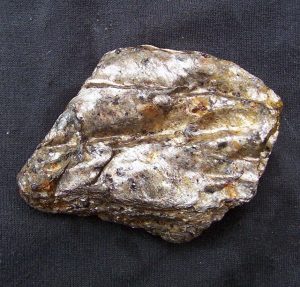 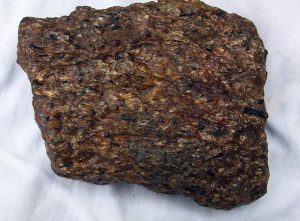 Schist with garnet and tourmaline 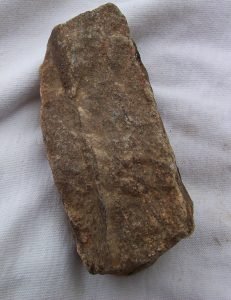 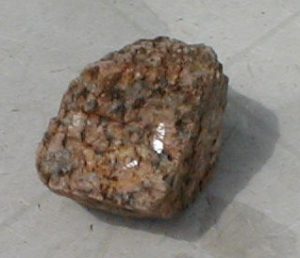 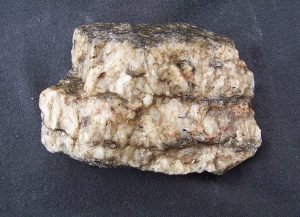 Gneiss is the fourth type of metamorphic rock common in the Wissahickon. Generally harder than schist, it appears as finely banded with thin parallel layers of different colors, dark and light. Like schist the precursor of some gneiss is silt or mud sediment but with insufficient aluminum to allow the formation of micas during metamorphism. Other types of gneiss may form from the metamorphism of igneous rocks. 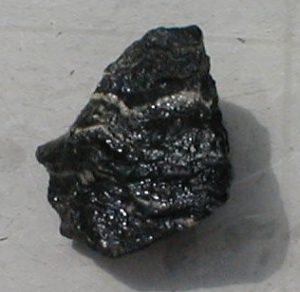 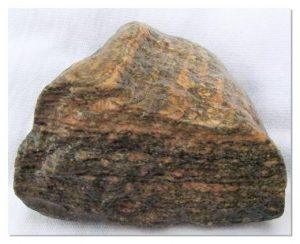 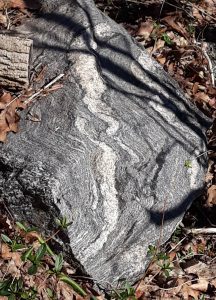 Gneiss adjacent to a pegmatite intrusion

The rocks of the Wissahickon are mostly igneous or metamorphic with one exception – vein quartz, which forms far below the earth’s surface as hot water with dissolved silicates flows through fractures in surrounding metamorphic rock.  As cooling progresses the dissolved minerals settle out filling the space within the fracture. The color of the quartz vein depends on other minerals dissolved with the silicates and can vary from white to rust colored to gray.  Vein quartz is a chemical sedimentary rock. It can often be found in the small side creeks that run through fractures in the surrounding bedrock. They take the shape of the space they fill. 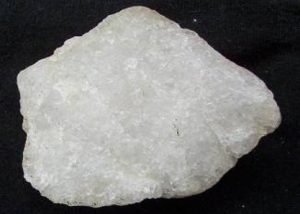 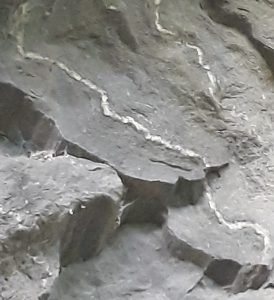 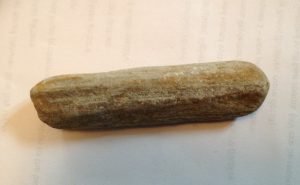 Three of the rock types mentioned in this article can be found in the bridge at Valley Green: schist from several perspectives, pegmatite, gneiss.   Look at the top rocks as you cross the bridge  The pegmatite will appear coarse in texture and light in color, the gneiss will be clearly banded, and the schist will show its variety of colors with layering .  In the wall of the bridge you can see schist with garnets. 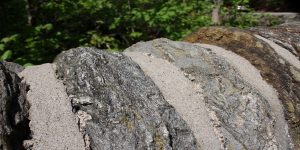 Sections of gneiss and pegmatite on the Valley Green Bridge 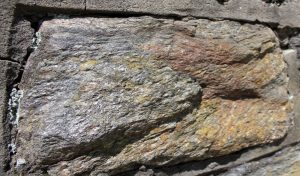 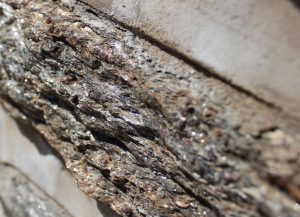 You are invited to explore the amazing Wissahickon geology for yourself and form  your own ideas.  There were no eye witnesses to its formation. Geologists do not all agree on how it formed , but the ideas expressed in this article make the most sense to the author in explaining why we have a stream that ends in a mountainous gorge rather than beginning in one.

Start exploring by going on one of our self-guided geology walks:

Bruce Goodwin, Guidebook to the Geology of the Philadelphia Area, 1964, Pennsylvania Geological Survey.

The Wissahickon: Our Rock Formations are the SCHISTS! www.eastfallshouse.com/wissahickon-rock-formations-schist/