Home · News · Nature · From the Archives: Return of a Woodpecker

From the Archives: Return of a Woodpecker 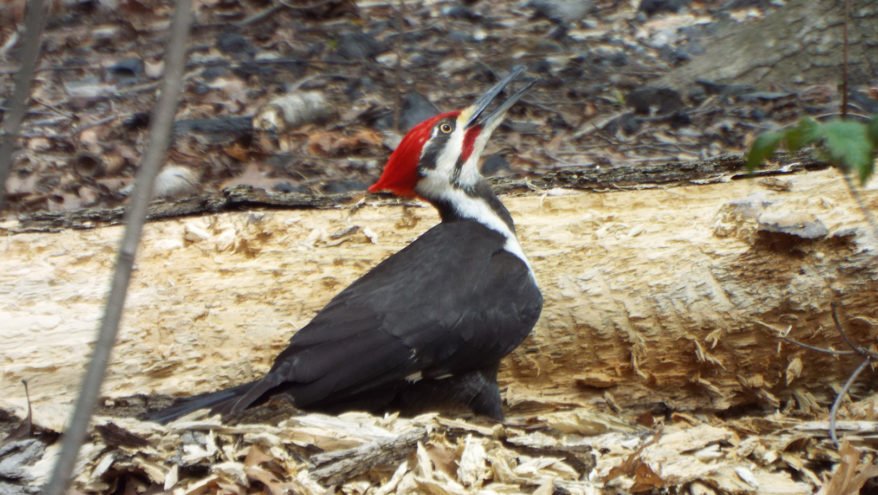 Another article in an occasional series of articles that appeared in FOW’s publications in the past and still resonate with us today. This piece was written by former FOW board member David Perlman. He served on FOW’s board from 1994 through 2000. This article first appeared in FOW’s Fall 1997 newsletter.

I am biking down a Wissahickon trail on a Sunday afternoon in April. Green is just starting to fill out the woods-that light pastel green of the season’s first leaves. Everything glows in the warm, deep-shadowed light of late afternoon. The weekend is winding down along with the day. Ritual exertion, up and down the hills, always sets the mind roaming at ease. I need to step outside of urban life, escape its utilitarian goals. I am always pushed to accomplish something practical: take a car for repair, change a light bulb, cash a check. The hours, days and weeks of these routines start to wear the psyche down. I need to do something-maybe nothing-for no reason but itself. As the urban world recedes, memories of favorite times and places flow. Colorado last summer-those rocky ridges above timberline. How different the San Juan Mountains were 25 years earlier. How different I was—better off, but worse too. Mt. Washington four years ago–camping in the snow and skiing the gulf of Slides. How badly I wanted to go back this month. The Adirondacks-that glassy lake at dawn broken only by the timeless wail of a lonely loon.

The Wissahickon, too, a quick escape, its own mysteries, its own truth. I recall riding along the same trail on a spring day years earlier. It was also late afternoon and my mind was roaming some interior path. Then I saw it—a woodpecker flying off into the woods. The black and white, the red on head, the loud stuttering call, a big bird with wings outstretched—gone in an instant. Was it or wasn’t it a pileated? I couldn’t be certain. It might have been a red-headed or even a downy or hairy. How often reality presents itself thus: a flicker of pattern and color, a bird half-recognized escaping into a dusky wood—ambiguous, beautiful, a seductive conundrum.

Alexander Wilson, American ornithology’s founding father—largely under-recognized—lived here in Philadelphia. Scottish immigrant and poet, advocate of liberty, school teacher by trade, he took to ornithology in his late thirties under the tutelage of William Bartram. Only a few years later, in 1808, he produced volume I of the monumental American Ornithology. Though not as gifted with the brush as his successor, John James Audubon, his contribution was in other respects greater. “This American species,” he wrote of the pileated in volume IV (1811) is “the second in size among his tribe, and may be styled the great northern chief of the woodpeckers, though, in fact, his range extends over the whole of the United States from the interior of Canada to the Gulf of Mexico.” The larger member of the tribe was the ivory-billed woodpecker, denizen of southern swamp and bayous, today extinct.

The pileated, a lover of old growth, was being pushed from urban environs even in Wilson’s day. “Formerly they were numerous in the neighborhood of Philadelphia,” he wrote, “but gradually, as the old timber fell, and the country became better cleared, they retreated to the forest. At present few of those birds are to be found within ten or fifteen miles of the city.”

Audubon, whose Ornithological Biography (1831-1839) was influenced by Wilson, also considered the birds common in old woods but driven from settled regions and wrote of the pileated, “Even now, when several species of our birds are becoming rare, either to gratify the palate of the epicure or to adorn the cabinet of the naturalist, it is to be found everywhere in the wild woods, although scared and shy in peopled districts.”

During the 19th century, it became virtually extinct across eastern Pennsylvania. But as secondary growth began to age, it made a comeback. “It prefers mature forest with dense canopy cover and many stumps and fallen logs,” according to the Atlas of Breeding Birds in Pennsylvania (1992). “Smaller second-growth woodlands are acceptable if they contain scattered older trees and dead stubs. Likewise, territories may include swamps, bottomlands, hillsides, or areas along ridges, depending on the availability of suitable trees.”

The Wissahckon, once the cradle of American industry, has been a park for more than a hundred years—time enough to foster big, old treasured trees. The Atlas notes: In the highly developed areas near Philadelphia and Pittsburgh, observers located few pileated woodpeckers, although the species has returned to Philadelphia’s Wissahickon Valley in recent years.” So things move full circle, sometimes, in matters of conservation.

My ride is approaching its conclusion near the same wooded areas where I saw the mystery woodpecker years before. Again I spot a woodpecker. It’s clinging to a tree beside the trail. I stop the bike. No mistaking it. No need for binoculars. Crested red, white and black on wing, its long neck and drill of a beak—a pileated.

I stand watching, as long as I could have hoped. Then it flies beside me across the trail. Those enormous black and white wings seem eagle-like for a woodpecker. It decides not to escape-where could it go?-but finds a mammoth dead tree and starts moving along its trunk. Then another pileated appears, and together they explore a hole-a mating pair perhaps.

I could watch for hours in the long-shadowed, luscious late afternoon light. The woods are solitary and still. There is only the quiet squawk of an occasional nuthatch and the call of a distant crow. The woods grow deeper and more remote, until I am far away-in the north woods, absorbed in wildness. But then I return, wondering: How can these magnificent birds pass their wild lives amidst our massive intrusion?

I flee before the woodpeckers do, leaving them for another encounter on yet another day.