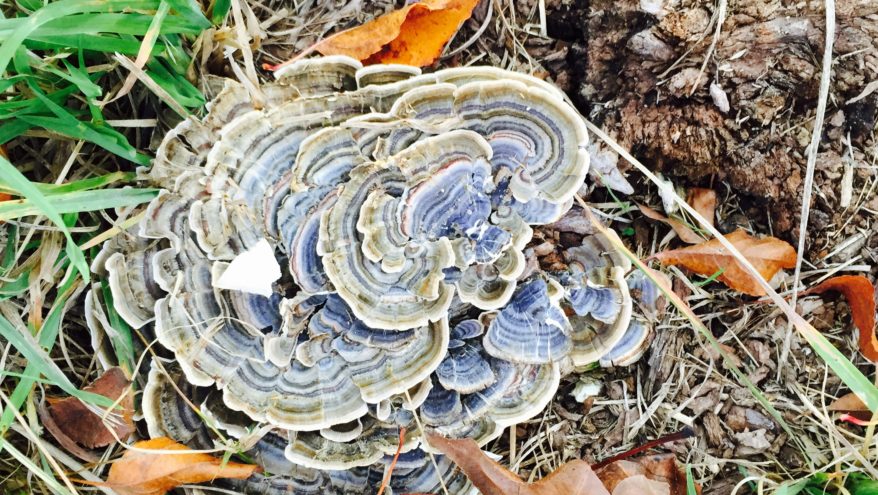 I like to think of the humming strands of fungal mycelia, pulsing messages and energy between and among the tree roots beneath our feet when we walk in the woods. Life above the ground just feels safer and saner knowing that fungus is stabilizing ecosystems, exchanging nutrients, providing enzymes, and making organic waste in the “wood wide web.” How do we know these things are happening in the dark recesses of the soil? We can find the manifestations of fungus whenever we see its fruiting bodies in the form of mushrooms and lichen – even in February!

With an estimated over 1.4 million species of fungi and 93% of them still to be discovered, it is difficult to be certain about the treasures in the woods; only photograph what you find because eating mushrooms can be risky. Here are several fungi we can find in our snow covered Wissahickon:

Lichen – A composite of fungus and algae, lichen covers 6% of the earth, living on top of trees, rocks or soil, and it absorbs pollutants and carbon dioxide, making air cleaner. The most easily recognized lichen species is foliose, with its leaf-like rosettes.

Turkey Tails – Tramxetes versicolor is the turkey tail we are most likely to see in our neck of the woods, appearing in shelf-like clusters on dying wood. Saprophytic because they decompose, turkey tails are polypores because they do not have gills, and they have tremendous medicinal qualities.

Oyster Mushrooms – Pleurotus ostreatus also grows in shelf-like clusters on living and dead wood, and their gills run down the almost non-existent stem. The caps are smooth and meaty with a ruffled edge.

Chaga – Inonotus obliquus is a parasitic fungus (sclerotium), not a fruiting body, growing mostly on birch trees, and it looks like irregular forms of burned charcoal. Rich in antioxidants, chaga is used to help cure cancer.

I will leave you with these four instead of confusing you with others for the time being, but be on the lookout for other fabulous fungal finds in our beloved Wissahickon.

Attend one of Faith’s upcoming Frosty Fungus guided hikes and learn more about fungus in the Wissahickon!