Home · News · Education · Dispatches from the Trail: The Geek in Winter

Dispatches from the Trail: The Geek in Winter 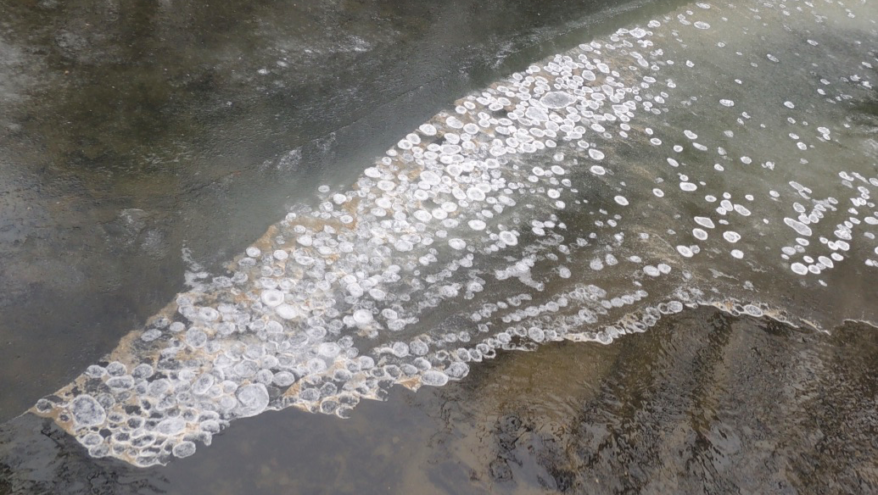 When did geek even become a word? Was I one in high school? If so, why didn’t I know it? If not, how did I get to be one now?

Geekdom, as I see it, has incredible advantages, and some of my best friends would label themselves as dorks of one sort or another. Maybe we can think of it as being someone who gets excited and absorbed by something that a lot of other people don’t get. Being carried away by curiosity is pretty typical, and that’s exactly the kind of person I find fun to walk with on my TA shifts. We are an extraordinarily curious bunch: curious about rocks, trees, fungi, butterflies, beetles, birds, clouds, curious about each other. Every TA is a lifelong learner. 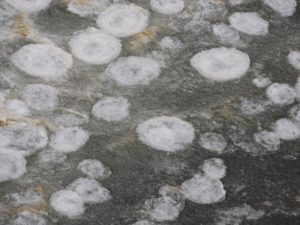 On a winter Trail Ambassador walk with Jeff Clark, a retired science teacher, and his wife Margot, we stopped to ponder some strange ice formations in the creek. Jeff’s curiosity is enhanced by his knowledge and vice-versa. We stood on the Kitchen’s Lane Bridge with wind whipping our scarves into frenzies, looking at a quilt of swirls trapped in an icy gridlock. We’d never seen anything like it before and wondered how it could have happened that day. We tossed around ideas, but nothing really clicked. We had to keep wondering for months.

Who does a curious person ask about the plate tectonics of ice? I searched online and came back empty-handed. Is there a field of ice-eology? Then I happened to be in Maine, where Steve Ressell, a professor from the College of the Atlantic in Bar Harbor, did a great presentation about animal tracks in the winter. He had amazing photos of ice and snow sculpted into fantastic shapes. Maybe he could tell us.

Well no, not immediately. But he got info from Garrett Conover, a wilderness guide, who has seen this phenomenon many times in his frozen travels. The fact that they happened at a bend in the river was the clue he needed. “During the early stages of freezing, floating slush clusters were spinning around in an eddy. The edges of each cluster got rounded from spinning and from abrasion with each other,” he wrote. The common term for these shapes is pancakes. “Later, there was a drop in temperature and the clearer, darker ice formed, trapping the pancakes in a full sheet of ice.”

Of course! Why didn’t we think of that? Though Conover isn’t a card-carrying ice-eologist, the explanation holds water. Maybe cold water, anyway. And from now on, when I get to a bend in the creek on frigid days the geek in me will hope to get another look at a pancake logjam, and maybe be able to share the factoid with my fellow TA.