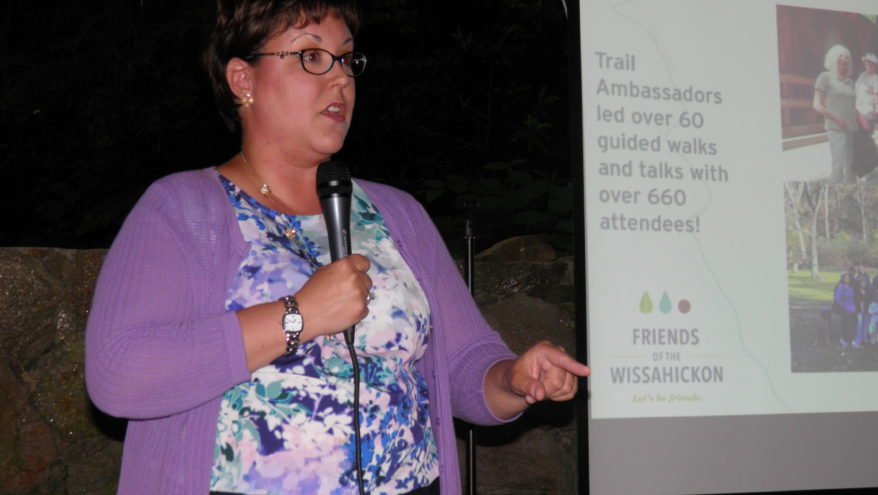 On the eve of a Philadelphia City Council vote on a soda tax, Parks & Recreation Commissioner Kathryn Ott Lovell was the guest speaker at Friends of the Wissahickon’s (FOW) annual meeting at Valley Green Inn.

She implored the audience to contact their city council representatives to vote in support of the proposal. “Nothing is more important for parks, libraries, and Pre-K,” Lovell said.

She told stories of recreation centers throughout the city that were in desperate need of repair—tennis courts with knee-high weeds and playgrounds with broken swings—places where she would be hesitant to have her own children play. The soda tax, she said, could help address problems at much-needed recreation centers and parks. As commissioner, Lovell said she is disheartened to see the places across the city where children are playing. The Wissahickon is truly one of the city’s gems, she said, as she looked out upon the Wissahickon Creek.

Lovell praised the work of FOW and Executive Director Maura McCarthy and said she was eager to continue working with FOW on park-related issues.

The annual meeting is an opportunity for FOW to thank members of its Board of Directors for their service and to welcome several new board members to the organization. Joining the FOW board are:

Chris Bentley (West Mt. Airy). A licensed real estate agent and returning FOW board member, he has lived adjacent to the Wissahickon for 15 years. Bentley has also served on the boards of the Chestnut Hill Historical Society and Historic RittenhouseTown. He grew up in the New Hope-Solebury area, attended Buckingham Friends School, the Lawrenceville School, and the University of Vermont. As an FOW board member, Bentley has chaired the Development Committee and served on the Joint Easement Committee (with CHHS) and the Executive and Valley Green Inn Oversight Committees.

Amy Branch Benoliel (Wyndmoor). She is one of three equity partners of the Iroquois Group and has been with the group for over 30 years, growing it from 200 to 2,300 members. Benoliel is a graduate of Hobart and William Smith Colleges with a BA in Anthropology. She has lived in the Philadelphia area since 1990 and supports cultural institutions both large and small in the greater Philadelphia region. She currently sits on the boards of the Woodmere Art Museum, Breakthrough of Greater Philadelphia, and Techne Music.

Walt Crimm (Mt. Airy). He brings over 30 years of experience working with museums and cultural institutions, providing expertise that is both visionary and focused on sustainable outcomes: intellectually, fiscally, and environmentally. He is a LEED Accredited Professional and currently leads Walt Crimm Associates, Inc. From 1996 to 2o11, he worked as a Cultural Practice Leader for Ewing Cole. Crimm has a Masters in Architecture from the University of Pennsylvania.

Alyssa Edwards (Chestnut Hill). As Associate Director of Environmental Permitting at EDF Renewable Energy in Philadelphia, she is company leader in the environmental permitting and compliance efforts for renewable energy projects in development and construction throughout the U.S. Previously she was Senior Project Developer at Gamesa Energy USA, LLC, and a Risk Analyst at AIG Environmental. She holds an MS in Environmental Policy, Planning, and Regulation from the London School of Economics and Political Science.

Cynthia Price Heckscher (Mt. Airy). She is a Managing Director with Diversified Search. From 1987 to 1989, she served as the Director of Research and Program Development for the Health Federation of Philadelphia. She has served on a number of boards with a focus on health care and children with developmental disabilities. A founding board member of the Daughters of Charity Foundation in St. Louis for ten years, she was previously on the Boards of the Harriott O. Landenberger Medical Research Foundation, Chestnut Hill Health Care, and The Green Tree School. Heckscher holds a BA from Vassar College and an MS in Social Work from the University of Pennsylvania.

We look forward to a vibrant, exciting year at FOW—we’ll keep you informed of our progress!