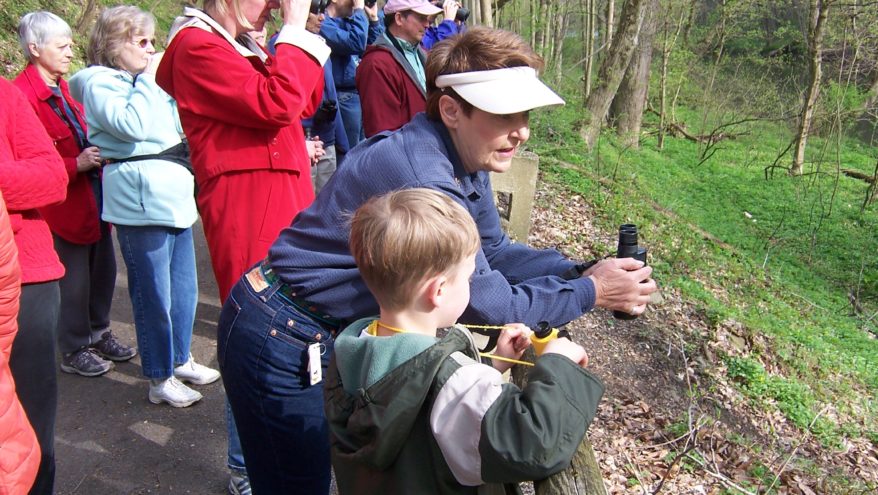 FOW sat down with bird expert  and photographer Ruth Pfeffer on September 2 to talk about birds. Owner of Birding with Ruth, Pfeffer is credited with creating the birding program at the Morris Arboretum, where she is an instructor. She has led birding expeditions throughout the Mid-Atlantic region and abroad since the 1990s and contributed to the Breeding Bird Atlas project in the 1980s.

Most people think of spring, not fall, as a time for birding, but your upcoming lecture and bird walk is in September. Why?

Because fall migration is exciting. It’s different from the spring, and there are lots of birds already on the move. . . . The one big difference is they don’t sing in the fall. Your challenges are different and the warblers look different. They’re called the confusing fall warblers because their breeding plumage is not apparent. They’re getting into their winter plumage. So for birding in the fall, you need to develop a whole different set of skills.

Why aren’t they singing?

In the spring, they sing because they want to breed. In the fall, they’re heading south from all the way up in Canada. The birds that will come through the Wissahickon on their way south, some of them will leave the states and some of them are neotropical* and some of them will stay in the States. Some even eventually go down to Argentina. I was viewing shore birds yesterday at Green Lane Park and those birds are on their way down south.

Yes. Migration starts—and I know people laugh when I say the date—but migration starts July 22. That is the shore bird migration. The birds that nested up on the Canadian Tundra have a long way to go, like 7,000 miles. So they start migrating then, and next comes song birds and flycatchers and raptors. That’s what goes through the Wissahickon. The raptors migrate during the day and our woodland passerines** migrate at night. If you’re out on a clear night you can hear chips because, even though they aren’t singing, they’re still chipping and communicating to one another. There’s lots of technology now, like what is coming out of the Cornell Lab of Ornithology, that can actually track when there’s a fallout.

What is a fallout?

A fallout is when a number of birds just drop into an area.

Do we get those in the Wissahickon?

Oh, yes. Last night and tonight, there’s going to be a fallout because there’s already birds migrating from northern Pennsylvania, Connecticut, and Massachusetts, and they’re travelling south. They’re going to drop into the Wissahickon to feed probably for a few days until this cold front is over.

Why do they choose the Wissahickon?

Just think of all the skills that a bird must know. If you and I wanted to travel to Costa Rica, we would probably have a travel agent, make restaurant reservations, and set up accommodations. Birds have celestial skills, they have to know where bodies of water are, where the food is, where they can be safe. The Wissahickon is a green corridor that says food, protection, and water, which is why it is an important bird area. That is why they stop.

So the weather dictates when they decide to stop?

Yes. And when a storm is coming, birds can get off course a bit, and that is how we can wind up with a rarity. . . . Bald eagles start migrating in August and into September, October, and November, and they come down the coast. Well, with a storm coming up, you know they’re going to move inland a little bit.

People who bird frequently, we watch the weather. Where the jet stream is, that is very important: how low, how high. When you are a serious birder you learn to watch that, then you can pretty much tell what kind of day it’s going to be. The humid or dry days are very stressful for birds. The cooler weather is easier because they feed continuously since they are migrating. Fall migration is very exciting for that reason.

You’re asking people to meet you at Bells Mill Road and Forbidden Drive for your hike (on September 24 in 2016). Why that location?

I have found that to see a number of species, it’s good to be next to the stream, which is attractive to the birds. They should be active and we should have a nice fallout at that time. We can also see raptors along Bells Mill Road, and I love that area.

Any tips bird spotting tips you want to share?

A lot of birds travel with chickadees. Anybody who birds with me knows I stop for chickadees, even though I see them all the time, because they’re the first bird that gives off an alarm so other birds travel with them. In the fall and the spring, you will see chickadees in a mixed flock and those birds are with them on purpose. They know the chickadee recognizes predators fast, and give off an alarm note. It’s pretty cool.

by Denise Larrabee, Editor/Writer, Friends of the Wissahickon

*Neotropical birds breed in Canada and the U.S. during summer in North America, and winter in Mexico, Central America, or the Caribbean.

**Passerines are songbirds that perch.