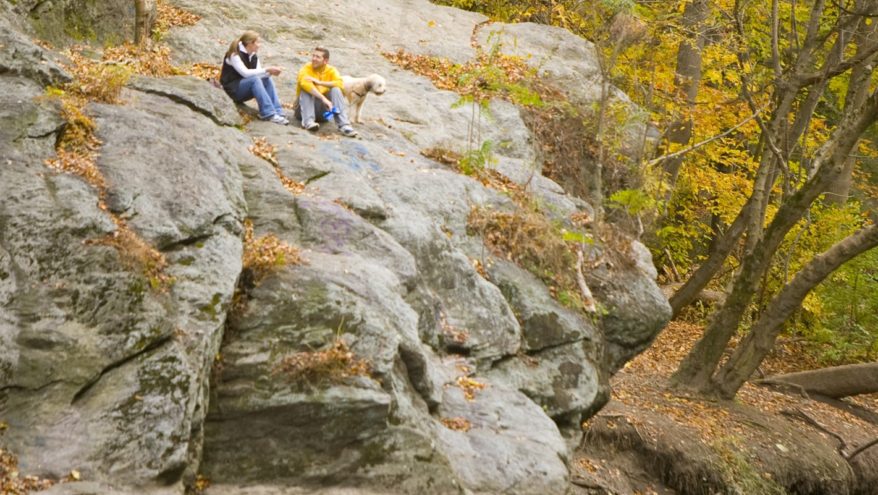 Trail Ambassador Sarah West explains why the Wissahickon is a backwards creek, what this tells us about its possible origin, and how erosion exposed rocks once buried up to 10 miles below the surface to reveal the familiar formations we see today.

Q. How did you learn about the geology of the Wissahickon?

A. I’m not a geologist. I’m a retired science teacher. Most of what I learned about the Wissahickon came from preparing to teach geology and Mary Lou Hill, who was a geologist at Temple University. I went on a couple of her walks and wrote up some of the things I learned from her, together with some things I had learned from a variety of other sources. She went over that material with me and she made a lot of comments and suggestions—and in some places corrections—and what I have subsequently learned is that when you go out on a geology walk, you want to have only one geologist because you want to know exactly what you are looking at. If there are two or—horrors—three, you are going to come back thoroughly confused. Not everybody agrees on the geological history of the Wissahickon.

Q. Why is the Wissahickon important geologically?

A. It is certainly recognized by local educational institutions as a good place to take students to study geology. It has quite a variety of rocks and there’s a story in those rocks that can be quite interesting to people. The rocks in the Wissahickon are very old. They are older than the Appalachians.

People can go through the Wissahickon and see evidence of plate tectonics, which, of course, is the unifying theory of geology at this time. It really offers an explanation for everything. It’s the theory of how the continents have moved across the face of the globe very slowly—about as fast as your fingernails grow—probably propelled by convection currents in the underlying mantle that lies beneath the crust. Those convection currents are created by heat emerging from the core of the earth. So once that theory became accepted in geology, you could explain all kinds of things. In the Wissahickon you can see a lot of evidence of plate tectonics and what happens to rocks when continental plates and oceanic plates push together. So what people are looking at when they go to the Wissahickon are the roots of a very ancient mountain range older than the Appalachians.

There are also some mysterious things about the Wissahickon. For example, it is a backwards creek. It arises in gently rolling land, and it’s major headwater is runoff from a parking lot at the Mongomery Mall. It is further fed by tributaries and ends in this little mountainous gorge. That’s backwards. Most creeks start in mountainous gorges, then flow through gently rolling land, and then maybe some kind of marshy area that brings them out into a bigger body of water. But the Wissahickon doesn’t follow that pattern. So I think it leaves a rather interesting question to be answered.

Q. Do we have an answer?

A. We have one that appeals to me. And I’m sure other people have other answers. Right at the northern end of the Wissahickon is a fault line called the Huntingdon Valley Fault. A fault line is a place where two different masses of rock come together. On the northeast side of this fault line, the rock is quite different than what you find in the Wissahickon. You find overlaying sedimentary rock. But in the Wissahickon, there really isn’t any overlying sedimentary rock. There’s just what would have been under sedimentary rock. So we have this really quite abrupt change in the kind of rock we have and we have this backwards stream that ends in a mountainous gorge rather than beginning in one.

So the theory that appeals to me the most is an idea that involves something called terranes. These are pieces of land that get stuck on a continent when an ocean closes. The best example we have of that now is the Mediterranean, which is a closing ocean. Africa is driving north into Eurasia and it is forming a huge mountain range that starts with the Alps and goes all the way through Turkey. There are chunks of land in the middle of the Mediterranean like Sicily, Corsica, Sardinia, and all those islands in the central Mediterranean, like Santorini. They’re volcanic and mountainous. Eventually that ocean—in the far distant future, because it’s moving at the rate your fingernails grow—it’s going to close, and all of those chunks of land in the middle of the Mediterranean are going to get stuck on either Europe or Africa. There is already a big piece that’s gotten stuck on Europe, and we call it Italy.

Q. So the Wissahickon was formed by a closing ocean?

A. The Wissahickon might have been a mountainous island in a closing ocean, prior to the Atlantic. It was called the Iapetus Ocean—the father of Atlantis—and it eventually shut, carrying with it chunks of land that were similar to what we see in the Mediterranean. They got stuck in this closure, that formed a huge land mass that geologists call Pangea, and that was when the Appalachians formed. Mary Lou Hill’s idea—which really appealed to me because it explains so much—suggested that the Wissahickon was one of these terrains which got caught up in this closure. So when the Atlantic opened again, that piece of land stayed stuck on our little piece of North America. There are all kinds of terranes that have been identified and stuck on the west coast, because the Pacific is currently a closing ocean, while the Atlantic is currently an opening ocean.

Q. What is the difference between a closing ocean and an opening ocean?

A. Well, it has to do with plate tectonics. For an opening ocean, there’s a mid-oceanic ridge and there is lava that comes up through the middle of that ridge. It rises and it pushes the land on each side; it pushes it apart. In the Pacific [a closing ocean] there’s a process called subduction, where one piece of crust is moving under another. The Pacific plate and some other plates that are out there are moving underneath the North American plate, or you could say the North American plate is pushing west, over those plates. When that happens, the oceanic plate, which is more dense, falls back down toward the crust and it will melt, form volcanoes, cause earthquakes—cause a lot of the stuff like we see in Yellowstone.

Q. So the closing and the opening is about what is going on underneath with the plates?

A. Yes. Continental masses either moving toward each other and making less ocean space, or away from each other, making the ocean broader. And this is probably an ongoing process. But it’s very hard to see because it’s so slow.

A. There was probably ten miles of stuff piled on top of it. The opposite of mountain building is erosion, water—mostly water—and in some places wind. They will eventually wear away mountains and level them out. The Appalachians at one time were probably as high as the Himalayas and they have been eroded over 250 million years. So mountains will wear down almost at the same rate that they get built up, unless there is a really active geological process that is associated with this thing called subduction which is pushing land up.

Q. So erosion shapes the Wissahickon Valley, but erosion of soil is something FOW is battling all the time to preserve the park’s habitat and improve the water quality of the creek.

A. Same process, but slower, because the rock is harder. Soil is loose and easily carried away. Once erosion starts, there will be little pieces of rock and grit in that water, and it’s almost like sandpaper coming down over the rock and wearing away more rock. And then that rock-carrying grit flows over land and erodes it at an often faster pace than pure water might.