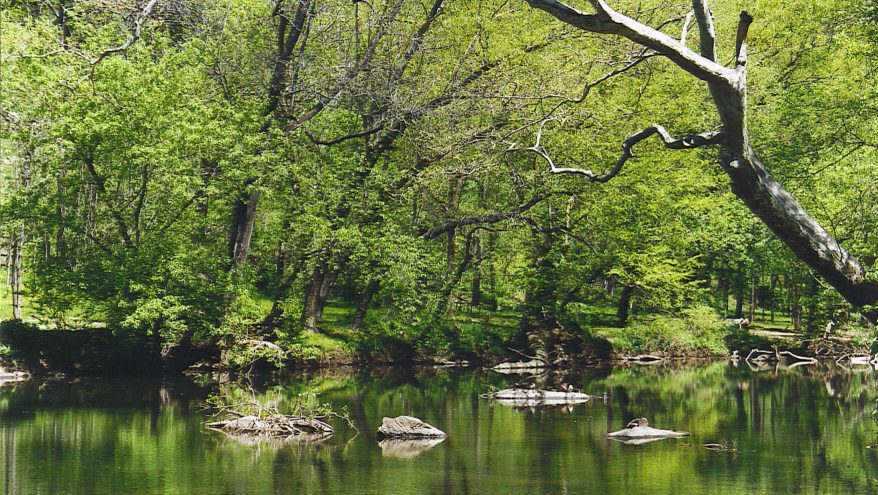 More than 350 people joined FOW’s virtual Valley Talk in October to hear Lenape Nation of Pennsylvania council members discuss “The Past and Present of the Lenape in Pennsylvania.” The ease of online programming makes it possible to attract an audience of this size, but the real draw was the clear popularity of this important topic.

The Lenape are the indigenous people of Eastern Pennsylvania, Southern New York, New Jersey, and Northern Delaware. The Lenape Nation of Pennsylvania is a nonprofit organization dedicated to increasing awareness of Lenape history while continuing the preservation and revival of the language and cultural traditions.

Adam Waterbear DePaul, the Nation’s storykeeper and one of the evening’s speakers, said that FOW’s program captured the essence of the “Fourth Crow” era from the Lenape legend “The Prophecy of the Fourth Crow.” The story, passed down through the family of another Valley Talk speaker Chief Robert Redhawk Ruth, relays the Lenape Nation’s decades long struggle to survive and keep their community and culture intact. Basically, it goes like this: The First Crow was the Lenape before the coming of the Europeans. The Second Crow symbolized the death and destruction of their culture. During the Third Crow, the people went “underground,” hiding their identity. The Fourth Crow was the Lenape becoming caretakers again and working with everybody to restore this land.

“Programs like FOW’s help us develop a broader community by enabling us to tell the Lenape story and what we’re doing today, and foster new partnerships with interested audiences, who can then engage others,” said DePaul, an instructor and Ph.D. candidate at Temple University, where he is co-founder and president of Native American and Indigenous Studies.

The Lenape Nation of Pennsylvania launched the Rising Nation River Journey in 2002, initially in response to increasing pollution in the Lenape Sipu—Delaware River—and to engage like-minded individuals and organizations such as FOW to join them in addressing the problem. They invited them to sign a Treaty of Renewed Friendship that acknowledges the Lenape’s traditions and the Nation as stewards of their ancestral homeland. FOW was among the first signers and continues a close partnership with the Lenape Nation.

Every four years, the public is invited to participate in the River Journey and sign the Treaty (at the event or online). DePaul, coordinator of the next ceremony in August 2022, will begin recruiting volunteers in the spring in preparation for the start of planning this summer. Interested groups and individuals should email DePaul at info@lenape-nation.org.

The River Journey’s key message is about stewardship and protection, not ownership. As DePaul explained, “It’s a kind of reciprocity agreement from the standpoint of mutual respect and understanding between people and the environment.” Added Chief Redhawk Ruth, “We want people to understand our traditional way of conserving land by walking softly on the earth, whether it’s on a trail or by the Wissahickon Creek. It’s about keeping the natural harmony.”

Among the topics of interest at the Valley Talk was the ongoing revival of the Lenape language. Never written down, it was passed orally from person to person, but beyond a few dictionaries compiled by colonial linguists that either are inaccurate or mix dialects, the language essentially became extinct. However, Adam’s mother, Shelley DePaul, the Nation’s chief of education and language, is spearheading efforts to change that. A genealogical and historical researcher, she is a Lenape language specialist, who the University of Pennsylvania has credited as being one of only four people in the world who speaks Conversational Lenape. She has taught Lenape language classes at Swarthmore College for which she created the classroom textbook, the only one of its kind. Shelley is working to revive the class at Swarthmore; for now she is holding classes independently online, for which there is a waiting list.

Fun fact: The name Lenni Lenape, which many of us learned in school, is what Adam calls a “colonial linguistic blip.” Lenape means “original people,” so, while it’s not wrong per se, adding Lenni translates to “original original.”

Due to time constraints, the following questions submitted during the Valley Talk were answered by Adam DePaul in a separate conversation:

Q: How difficult is it to preserve your traditions and values during a time when cultural differences and environmental issues are seen as divisive? A: While it can be difficult, in many ways it is also easier now than any time in our history. In the last decade or so, people’s social consciousness is more accepting of and sensitive to native and minority issues. They’re more curious. In the last decade or so, we’ve been invited more places, asked to make more presentations, and have had more freedom to practice our ways and speak about them.

Q: How can I get notified about the River Journey and other Lenape activities going on in the area? A: For general information about the Lenape Nation of Pennsylvania’s history, ongoing engagement and support opportunities, and more, visit their website at lenape-nation.org. Check out their first Project page beginning this spring to learn more about becoming a Treaty signer, joining the Nation on the river, or simply being a spectator.

Ceremonial Chief Chuck Gentlemoon said at the Valley Talk that the ancestors tell the Lenape to take care of the universe because the universe takes care of us. “Be caretakers of each other for we are all one people. Keep moving forward so that the generations know who you are. And always say thank you. Wanishi”.

Watch the full Valley Talk on “The Past and Present of the Lenape in Pennsylvania” on FOW’s YouTube channel.