Home · Virtual Valley · Trails to the Past · Wissahickon Environmental Center 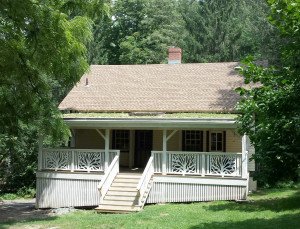 Imagine yourself feeling welcomed in a relaxing, natural area where the paths are obviously frequented.  A pleasurable escape for all passersby or bench sitters who enjoy the inviting atmosphere created by birds, wildflowers and quiet, itself.  This experience begins and ends for all (horses, leashed dogs and people of all ages) at the Wissahickon Environmental Center/Tree House.

The Wissahickon Environmental Center (WEC) was originally part of the Andorra Nursery. Read more about this on the Trails to the Past section on the Andorra Natural Area.

Soon after Andorra Nursery was established,

employee and foreman Adolph Steinle, a German pioneer, became the Nursery’s “propagator” of trees and shrubs.  In 1890 he added a porch to the house, constructing it around a nearby sycamore tree, letting the tree grow through the porch’s roof, adjusting the hole every few years to the growth of the tree.  This unusual practice got the attention of many and his residence became known as the Tree House—an identity it still holds.

After Steinle, there were two other resident employees in the house:  The Cressman, then Lightcap families.  From 1940 through 1977, the last residents were the James Lupica, Sr., family.  Mr. Lupica was a master gardener for the Andorra Nursery until it closed in 1961.  He stayed on as a tenant of the Houston Estate until 1977 when the Fairmount Park Commission established the Andorra Natural Area for educational purposes.

In 1981, when the sycamore tree growing though the Tree House’s porch roof became 230 years old, it was cut down by Fairmount Park due to possible liability issues.  The next year the Wissahickon Environmental Visitor Center began.  It preserved a large slice of the sycamore tree, which is on display today.  The first director of the Wissahickon Visitor/Environmental Center was Sioux Baldwin, who served in that capacity from 1980-2000. 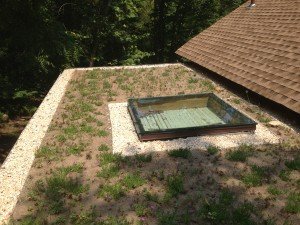 In 2018 the Tree House, now called the Wissahickon Environmental Center (WEC), had its back porch modernized (the same porch the sycamore tree grew through), sporting colorful artistic railings and balusters and a “green” porch roof.  It still has the original interior of a 130-year-old building.  A pictorial history of the building is on display inside.

The WEC is well-known for its regular environmental education walks and classes for both children and adults, staffed by wonderful Environmental Educators through Philadelphia Parks and Recreation.