Home · Virtual Valley · Trails to the Past · Henry Avenue Bridge 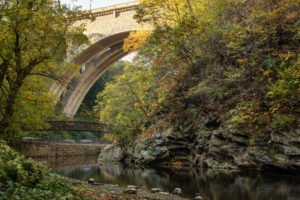 The lower Wissahickon Valley begins at the Philadelphia Canoe Club where the Wissahickon Creek empties into the Schuylkill River.  This southern portion of the Park includes such notable attractions as the 100 Steps, Lovers’ Leap, Hermit’s Cave, The Hermitage, Historic Rittenhouse Town, the on-location site of a scene from the 1981 movie Blowout and finally the Walnut Lane Bridge.   At the center of it all is the magnificent Henry Avenue Bridge, also known as the Wissahickon Memorial Bridge honoring WWI veterans from surrounding neighborhoods and/or the Brigadier General Anna Mae V. McCabe Hays Memorial Bridge.  While the roadway surface of the bridge is, itself, remarkably unremarkable, the views of the bridge from north, south and below are worth a visit.  The Henry Avenue Bridge was listed in the National Register of Historic Places in 1988. 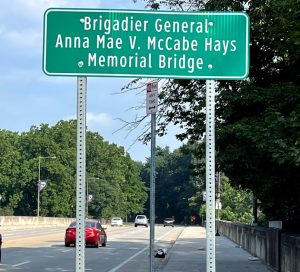 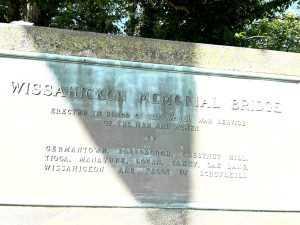 In the 19th Century, several bridges were built to connect the communities and steep hillsides on either side of the Wissahickon Creek. They were originally constructed of wood and then, after numerous flooding incidents, were replaced by locally-quarried stone.  As these bridges were always 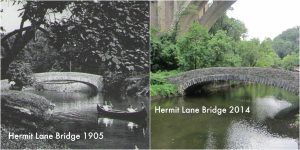 located at the Valley floor, the trek all the way down and up the steep hill sides other could be onerous, especially for the west side community of Roxborough whose residents worked in the east side communities of Chestnut Hill, Mount Airy, and Germantown.    A noteworthy example is the Hermit Lane Bridge just south of the Henry Avenue Bridge.  The steep ascent to which it leads up Hermit Lane suggests just how difficult passage from one side  of the Wissahickon Creek to the other had been.  The Walnut Lane Bridge, completed in 1908, was the first to span the ridges and address this problem of access.

The Walnut Lane and Henry Avenue Bridges are best understood as products of the “City Beautiful” Movement of the late 19th Century.  City Beautiful’s proponents, first in Europe and then in the United States, sought to ameliorate the harshness of industrial urban life by incorporating and/or facilitating access to nature.  Indeed, Landscape Architect Frederick Law Olmstead, who famously designed New York’s Central Park, recommended to the Fairmount Park Commission in 1867 that it build a carriage road along the east bank of the Schuylkill River connecting Center City Philadelphia with the Wissahickon Valley.  The result was Kelly Drive (originally East River Drive) intersecting Lincoln Drive (originally Wissahickon Drive) so that, in Olmstead’s words “the poor and the rich [could come together] on the ground which is common possession.” (Metropolitan Paradise, p. 203) 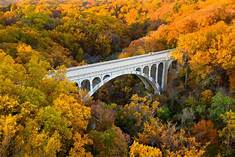 Proposals for a bridge crossing the Wissahickon along Henry Avenue first appeared in 1911.  Although completed only three years earlier just a mile north of the proposed bridge, the Walnut Lane Bridge had both practical and aesthetic drawbacks.  Practically, it lacked efficient access to Germantown or Center City for the residents of Roxborough.  Aesthetically, City planners concluded that since the bridge’s majesty could only be witnessed by those using the trails along the Wissahickon, another more spectacular bridge should be built that would be visible to automobile travelers along Lincoln Drive, thus serving as a source of civic pride.

The development of reinforced concrete for bridge construction in the early 20th century allowed engineers to use less material to support a roadway.  And it allowed Philadelphia’s planners to imagine not merely a roadway but also a subway-surface line crossing the Wissahickon from Roxborough all the way to Center City and back. 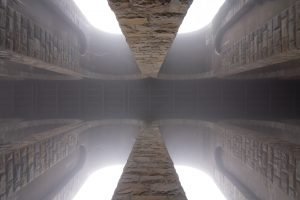 Interestingly, construction on the Henry Avenue Bridge did not begin until 1930, nearly 20 years after it was first conceived.  Traditionally, bridge design, engineering, and construction was undertaken by the Philadelphia Department of Public Works.  Several of the Department’s Annual Reports, backed by the Department of City Transit, strongly endorsed construction of the bridge to connect the neighborhoods of Roxborough and Manayunk to Center City by way of Germantown.  The projected cost (in 1914) of $400,000 ($10,867,840.00 in 2021 dollars) was justified at the time by the assumption that Roxborough property values would increase substantially. Although the City undertook a preliminary survey for the project in 1922, little else occurred until 1927 when the engineering firm of Modjeski and Chase was selected for the project.  This surprising development might be explained in a letter from the firm suggesting that it could relieve the City of responsibility for an overwhelming number bridge construction projects. 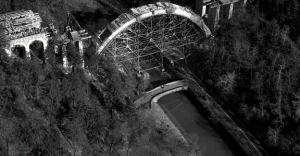 What the engineers designed and built was quite similar to the Walnut Lane Bridge, whose design was itself copied from Pont Adolphe, a bridge completed in 1903 that was constructed from stone and concrete and spans the Patrusse River in Luxembourg.  The planned subway-surface tunnel beneath the roadway was, of course, a significant difference from the Henry Avenue Bridge’s predecessors.  The completed Henry Avenue Bridge is 330 feet long and supports a 60-foot-wide roadway. The main arch spans 288 feet and soars 155 feet above the creek. The transit tunnel is 15 feet high and 25 feet wide.  A station was designed and built on the western end of the span but was not developed because plans for a subway-surface line were abandoned. This was likely due to anticipated redundancies from other transit lines, including Regional Rail.  As the projected subway-surface line was to run underneath City Hall (now Benjamin Franklin) Parkway, it was likely viewed as inconsistent with the Parkway’s aesthetic qualities.  Port-hole-like air vents for the tunnel can be seen underneath its ribbed floor on both sides above each of the bridge’s sixteen arches (nine on the northwest/Roxborough side and seven on the Southeast/East Falls side). 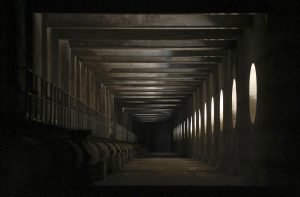 Renowned Philadelphia architect Paul Cret was selected to address the aesthetic qualities of the bridge.  Some of Cret’s most celebrated works include Philadelphia’s Rodin Museum; Merion, PA’s Barnes Museum; and Washington, DC’s Folger Shakespeare Library.  Cret believed that the architect must understand a structure’s underlying engineering before it is clothed.  Despite its value as a construction material, reinforced concrete is not a façade consistent with city beautiful aesthetics or, importantly, the natural setting of the Wissahickon Valley where numerous stone bridges and structures deliberately reflect the Park’s geology.  Cret’s design follows this aesthetic by clothing the concrete structure in naturalistic materials.  The arches themselves consist of a limestone façade scored to look like the individual stone wedges, known as voussoirs, which traditionally support the arches.  Above the arches are uncoursed (non-layer patterned) smaller schist stones, (naturally constructed from the famous and ubiquitous Wissahickon schist) which are randomly distributed consistent with the older and smaller bridges crossing the Creek.  Visible at the top of the bridge’s exterior walls are a limestone balustrade above a decorative cornice. 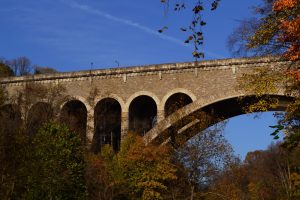 Unfortunately, the practical and aesthetic virtues of the Henry Avenue Bridge’s design are somewhat offset by the natural costs of its construction.   Hemlock trees were once plentiful throughout the park and, along with American Chestnut, a signature feature of its natural beauty.  Most are now gone, not only as a result of storms and disease.  The construction of both the Walnut Lane and Henry Avenue bridges required cutting massive groves of Hemlocks, many of them ancient, along the ridges lining the Creek.  The Hemlock, along with the Chestnut, have not returned to their former glory in the Wissahickon Valley. 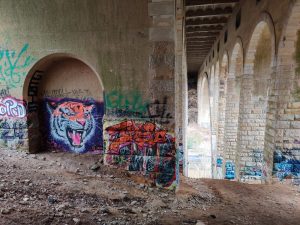 south of Lovers’ Leap, the bike trail from Ridge Avenue at the hermit Lane Bridge, and along the trail on the eastern side of Lincoln Drive beginning at Wissahickon Hall.  Locals will confirm that studying the bridge from the driver’s seat on Lincoln Drive can be hazardous, to say the least, despite the original “civic pride” vision of the City planners.  Excellent views underneath the bridge can be had along both the white and yellow trails.  The bridge itself, the traffic that crosses it, and the graffiti underneath remind the visitor that the Wissahickon Valley is an oasis in the middle of a densely populated city.  Best, therefore, to admire this marvelous phenomenon on foot and, of course, leave no trace when you depart.