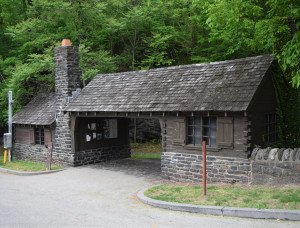 Built about 1940 as a shelter for Fairmount Park guards, Ten Box had a telephone and a wood or coal stove. During its early years the Wissahickon was watched over by the Fairmount Park Guard by car, foot, and horseback. The Guard maintained a number of call boxes identified by number along the length of Forbidden Drive.   The building at the juncture of Forbidden Drive and Lincoln Drive, known as ten-box, is the only remaining call box structure and no longer functions.  A bicycle concession was once located at this box.    The Fairmount Park Guard was disbanded in the 1972. The FOW Structures Crew has since maintained and improved structure.

There were 3 prongs to the Battle of Germantown October 4, 1777:  (1)Along Germantown Avenue – focusing at Cliveden, (2)  In Wistar woods where Lasalle College and Germantown Hospital is today, and (3) the lower Wissahickon.

The Wissahickon was one location of several squirmishes on that historically significant day. 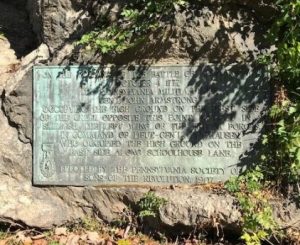 They occurred at the mouth of the creek and possibly near Hermit’s Lane Bridge.  About 300 Hessian Jaegers were encamped along Schoolhouse Lane.  General John Armstrong’s patriots were on the opposite side of the creek. There was a vigorous exchange of fire holding the Hessian forces in place and protecting Washington’s retreat.   Armstrong’s men were the last of the patriot forces to leave for Schwenksville and later Valley Forge.

During 1777-1778 much spy activity occurred in the Wissahickon.  The Mills were a military target because they supplied grain to the patriot forces.  Two guerrilla bands carried information about British activity in Philadelphia to Washington at Valley Forge.

The plaque on Washington’s Rock commemorating the October 4, 1777 Battle of Germantown was installed by the Pennsylvania Society Sons of the Revolution.

Douglas MacFarlan, The Battle of Germantown, Germantown Crier Volume 4 No 3 1952

Sidney Earle, Fairmount Park, the Parkway, the Wissahickon up to 1950, in secured history collection at Logan Circle Branch of the Philadelphia Library