Home · Virtual Valley · Trails to the Past · Tedyuscung Statue 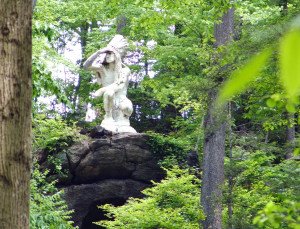 Of the three statues in Wissahickon Valley Park, Tedyuscung is the one most visited. (The other two are Toleration and Henry Houston.) It is a limestone statue of a crouching Native American with his hand to his brow looking west. It stands high up on what is known as Council Rock, by legend where the Lenape would hold their tribal meetings.  It was donated by Mr. and Mrs. Charles W. Henry, two prominent Philadelphians, in 1902. It is not accurate in depicting a Lenape warrior because the headdress is that of a western Plains Native American.  It is not an original statue either.  The sculptor J. Massey Rhind, who also did the Henry Houston statue, sculpted a Saukiog brave in a similar pose and dress for the Corning Fountain in Hartford, Connecticut.  J. Massey Rhind was not alone in his inaccuracies because at the turn of the century, this was how Native Americans were usually portrayed. Tedyuscung was not the first statue of a Native American to be placed on Council Rock.  The other two were made of wood.  The first was donated by Joseph Middleton , the president of the Wissahickon Turnpike in 1856. The second was placed by Ruben Sands 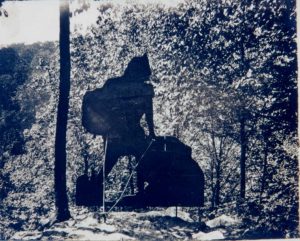 and was actually an advertisement for his Indian Rock Hotel on Forbidden Drive near the Rex Avenue Bridge.  Patrons at the hotel would hike up to the statue for recreation, just as we do today.

The statue stands 15 feet high and is made of hard limestone so one might wonder how it made it onto Council Rock.  On inspection you can observe that the statue is made of 4 pieces.  They were lowered by winches from the road above and assembled on Council Rock.  At the dedication of the statue, which was an event attended by the elite of the city and even by the governor of Pennsylvania, a presenter referred to the statue as “Tedyuscung” and the name has persisted.  It has been said that the Henrys and the sculptor, J. Massey Rhind, did not intend to have the statue represent an individual Native American.  It was to commemorate the movement of the Lenape out of the area and west, in the direction the statue is looking.

So who were the Lenape and where did they go?  And who was Tedyuscung? 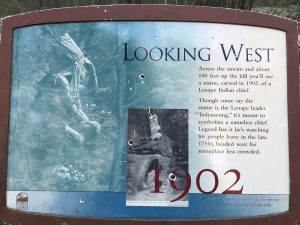 The Lenape were the original inhabitants of southeast Pennsylvania, their distant ancestors coming to the area from Asia via the Bering Strait twelve to eighteen thousand years ago.  “Lenape” means original people.  They are also known as the Delaware. English settlers named the Delaware Bay after the governor of Virginia, the third lord Del la Warr, Thomas West, and the Lenape who lived along the banks of the bay and river came to be known as the Delaware. The Lenape territory extended from New York to Maryland and also included New Jersey. The Lenape probably never actually lived in the Wissahickon, but hunted and fished here and farmed in the surrounding lands. Their economy eventually became dependent upon the Europeans because they could trade the pelts of the animals they hunted for tools, cloth, guns, gunpowder, and liquor, among other things, which they came to value highly.  Although William Penn’s agent purchased land from the Lenapes, they did not understand the concept of owning land. According to C.A.Weslager in his book The Delaware Indians “To the Delawares, land was like air, sunlight, or the waters of a river-a medium necessary to sustain life.  The idea of an individual exclusively owning the life-giving soil was as alien to their thinking as owning the air one breathed…”

The Lenapes were out of this region by the late eighteenth century.  They left not only because the Europeans moved into the locations their homes once occupied, but also because the herds of wild animals they hunted to trade for goods had been depleted. They moved north and west and eventually were pushed all the way to Kansas and then Oklahoma and Ontario where some Lenape live today.  But Lenape can also be found closer to Philadelphia, especially in the Easton area, the descendents of intermarriage between Lenape women and European men. Although it is uncertain whether any Lenape artifacts have ever been found in the Wissahickon, we have many reminders of their presence in the names of places that were derived from their language.  The name Wissahickon comes from two Lenape names ”wissauchsickan” meaning yellow colored stream and “wisamickan” meaning catfish stream.

So who was Tedyuscung and what happened to him?  Tedyuscung 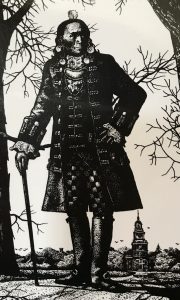 probably was never in the Wissahickon although he did travel to Philadelphia many times. He was born in the Trenton, New Jersey area in about 1700.  His family lived among white people and adopted some European manners, such as clothing fashion and the use of metal tools.  He spoke English although he could  not read it.  At age 30 years he moved with his family to the Forks of the Delaware (where the Lehigh and Delaware Rivers meet ), now the Northampton area, where he became a spokesman for the Lenape who had less familiarity with white people. He was not a chief by lineage, but was quite eloquent and at one point declared himself  the king of 10 nations, which were the six nations of the Iroquois, three Lenape tribes and a related Algonquian tribe. Not everyone recognized him as their leader, especially the Iroquois. As a spokesman, he was at different times involved with negotiations between the French to the west and the native Americans who sided with them, the Iroquois to the north, and the Quakers and Anglicans in Philadelphia. 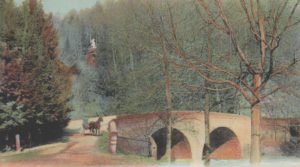 Tedyuscung desired a place where the Lenape would be allowed to settle and pled his case saying, “ I sit there as a Bird on a Bow; I look about, and do not know where to go; let me therefore come down upon the Ground, and make that my own by a good Deed, and I shall then have a Home for ever…”  Tedyuscung and his people never found that home.  They moved to what  is now the Wilkes- Barre area where he died in a fire in 1763, thought by some to have been set at the request of the Connecticut British who moved into the area shortly after the last of the Lenape left. 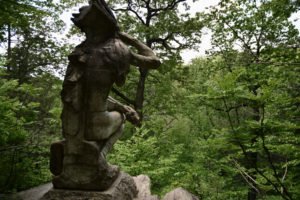 that commemorates Tedyuscung and the Lenape.  In 2002, to commemorate the 100 year anniversary of the placement of the statue, the FOW,  together with the Fairmount Park Historic Preservation Trust (now the Fairmount Park Conservancy) and the City of Philadelphia, cleaned and restored it. The FOW is continually active in caring for the statue.

Tedyuscung remains one of the favorite destinations for visitors to the park. For those not up to climbing to the statue on the White Trail, there is a sign on Forbidden Drive beneath the statue, just north of the Rex Avenue Bridge. From there you can see Tedyuscung in the winter and early spring before the leaves on trees obscure it.  Our statue pays tribute to the Lenape who were forced out of their homeland.

Sher, Dena. “The Indian,” Friends of the Wissahickon Newsletter. Fall 2002.