Home · Virtual Valley · Trails to the Past · Monastery House & Stables 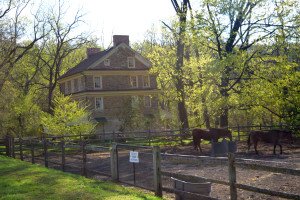 On a bluff above the Wissahickon Valley, surrounded by but unseen from the houses and busy streets of Mount Airy in northwest Philadelphia, lie the 18th-and 19th-century buildings of a farm and milling complex that has occupied the site since before 1750: the Monastery Complex. The farmstead has architectural, historical and cultural significance. Since 1995, the Boarders and Stewards of the Monastery (BSM) has leased the property from the Fairmount Park Conservancy, and has carefully preserved and maintained this 270-year-old historic property, while continuing the long tradition of horseback riding and carriage driving in the Wissahickon Valley. 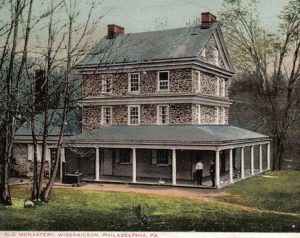 This farmstead is a rare surviving example of the 18th- and 19th-century way of life in Philadelphia, and is all that remains of Kitchens Mill, a once thriving water-powered manufacturing center, along the banks of the Wissahickon Creek.  The 1747 house is a well-proportioned and elegantly crafted example of a Philadelphia Georgian farmhouse. The main barn is a prototypical Pennsylvania bank barn (see details below.) The five buildings are situated in their original setting above the steep slopes of the Wissahickon. Horses and sheep continue to live in the two barns and graze in the pastures, offering visitors a vivid reminder of early agricultural Philadelphia in the heart of our metropolis.

The Monastery derives its name from members of the Germanic group, the Church of the Brethren, many of whom led a monastic life near the property. They first settled in Germantown during the 1719, and built a log building for meetings on the hill overlooking the Wissahickon Creek, near or on the present-day Monastery house site. By 1739 the Brethren began to disagree on theological issues, so that many of them moved to the Ephrata Cloister in Lancaster County, or to nearby Germantown. In 1747, Joseph Gorgas, a member of the sect, and a miller, built the house still standing on the site, using local Wissahickon schist. The house was referred to as the “Kloster,” meaning cloister or monastery, although the house was probably not used for that purpose. The Georgian farmhouse is unusually large, with three and a half stories and 17 rooms. When it was built, it was as grand as any mansion in Germantown. 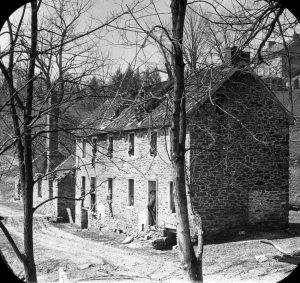 The Wissahickon gorge with its 100 foot high slopes and rapidly moving creek was an ideal source for more than 35 water-powered mills. In the early years there was a saw mill at this site at the end of Kitchen’s Lane, then a grist and corn mill, and by 1818 a paper mill, and later still, a flax and twine mill. After the house, barn and mill changed hands many times it was bought by the Kitchen family in 1852, hence the name Kitchen’s Lane. They operated a woolen mill. William Gordon Kitchen’s family sold the mill property in 1873, and the house property in 1898 to the Fairmount Park Commission.

The house on Kitchens Lane, built before 1848, was owned by Christian Dauphin whose occupation is unknown, but may have been a millworker. It was later occupied by workers from the Gorgas/Kitchen’s Mill. A spring house is a few steps from this house as well as a small stable that now houses sheep. The stable, called “The Three Ponds Barn,” looks to have been renovated in the early 20th century with interesting rounded columns making a porch. 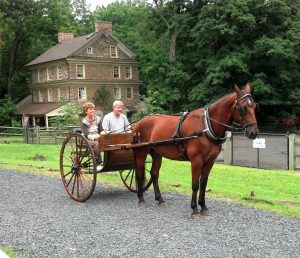 When the Fairmount Park was first formed in the 1850s and 1860s, the City of Philadelphia appropriated farms and mills along the Wissahickon Creek, and sought to return the area to a bucolic and natural setting. They therefore set about tearing down 18th-century farmhouses, barns and mills. Only a handful of buildings along the Wissahickon were preserved: the Monastery mansion, the barn and the mill worker’s cottage among them. The Monastery barn, also constructed of local Wissahickon schist was a “bank barn” with an earthen ramp leading up to the second floor for delivery of straw, hay and equipment to be stored in a dry area for the horses, cows, pigs and other animals.

From 1900 to 1914 the Monastery house and grounds were rented out to the Kitchen’s Lane Golf Club, in an effort to have a tenant so the house did not deteriorate. Later the Fairmount Park Commission started placing park employees in houses, and some Park Guards lived in the house and Park Guard horses were stabled in the barn. Over the years, the Monastery Complex deteriorated through neglect, and in 1968 one of the Fairmount Park Commissioners was in favor of demolishing it. It was saved through the efforts of Charles Woodward and Judge Harold Saylor. Friends of the Wissahickon had a key role in the restoration and upgrading the building.

The Boarders and Stewards of the Monastery (BSM), a nonprofit charitable organization, began leasing and caring for the property in 1995 with the Fairmount Park Conservancy taking over most of the care of the Mansion in 2008. At present, the barn is rented by; Kitchens Lane Stables, and the main house and the millworker’s house are rented as residences and Three Ponds Barn is rented for sheep. These rents and fees for horse boarding, combined with donations, make the complex financially sustainable. 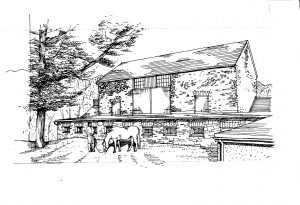 The BSM, with the support and oversight of the Fairmount Park Conservancy, are responsible for preserving the historic structures of the complex. Equine activities are fundamental to the history and identity of both the Monastery Complex and the Wissahickon Valley in Fairmount Park. In fact, Forbidden Drive got its name from the successful 1920 campaign by horse riders and drivers to forbid automobiles from driving through the Wissahickon Valley in favor of recreational uses which we all enjoy today.

When the main barn needed to be repointed, conservators from the Fairmount Park Conservancy analyzed the different mortars used over the years to learn the original composition of the mortar, and instructed the masons on the proper composition. Materials were collected locally to create the mortar. The color chosen to paint the woodwork on the barn was guided by historic preservation considerations, and consulting with other historic sites with similar buildings. Farmers from the 18th and 19th century were, out of necessity, driven to practical and economical solutions. Iron oxide red paint could be made from materials found on the farm, and this color was duplicated.

At www.MonasteryStables.org, there is more information about history and activities at the Monastery Complex, along with an opportunity to donate.

The source of much of this material is the paper, “A Brief History of the Monastery of the Wissahickon” (although it is not brief, 54 pages) by Melissa V. Johanningsmeier as an Independent Study for Dr. Roger Moss at the University of PA.