Home · Virtual Valley · Trails to the Past · Kelpius & Hermit’s Cave

Nestled in a serene primordial forest glen, the Hermit’s Cave is one of Philadelphia’s most intriguing historical landmarks, yet most visitors come upon it by surprise or pass by it unknowingly. 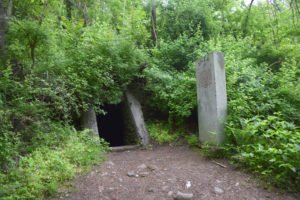 Who was the Hermit?
Johannes Kelpius, a brilliant Transylvanian scholar, led his followers to the Wissahickon wilderness in 1694 to await the end of the world. In the centuries that followed, lore and legend have surrounded this mysterious Hermit of the Wissahickon.  His historic and symbolic significance has inspired many romantic gothic stories popularized by Philadelphia authors like Edgar Allen Poe and George Lippard, but what do we really know of Kelpius and the first doomsday cult in America?

Young Kelpius was part of a radical German Pietist sect led by Johann Zimmerman called the Chapter of Perfection. Zimmerman studied the Great Comet of 1680 and believed the wonders of the sky were a sign of the end times which he determined would occur in 1694. When Zimmerman died unexpectedly, just as the sect was preparing to set sail for the New World, he bequeathed all his writings, astrolabes, telescopes, and almanacs to twenty-six-year-old Kelpius who became the de facto leader of the group.

These 40 celibate monks (all of whom were men), called themselves “The Society of the Woman of the Wilderness.” Their inspiration was based on an elaborate interpretation of the biblical passage from the Book of Revelations 12:16 in which a woman waited at the edge of the wilderness in prayer and meditation to prepare for the End of Days. They interpreted this verse to mean they should find a location at the edge of the wilderness to await the apocalypse. 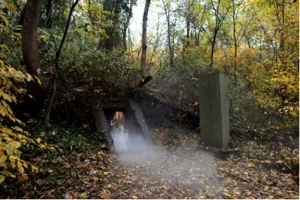 with its promise of religious freedom. Here they could practice their faith and await the imminent end of the world and Last Judgment without fear of imprisonment or execution for heresy.

The Wissahickon Valley was the furthermost edge of the known wilderness in the New World at the time. The sect heeding the revelations of their prophecies and mystical signs and wonders and set sail for the New World.

Why the number 40?
Philadelphia lies on the 40th parallel north that is a circle of latitude 40 degrees north of the Equator. The number 40 held the highest mystical significance for the group. The ancient Metropolis of Philadelphia, located in Asia Minor in modern-day Turkey, also lies on the 40th parallel as mentioned in the biblical Book of Revelations. The sect was comprised of 40 monks who would build a sanctuary tabernacle building measuring 40 ft. by 40 ft. square with 40 monk’s cells for sleeping.

Why the Hermit’s Glen?
After an arduous crossing facing pirates and storms, they sailed up the Schuylkill River on St. John’s Eve at the summer solstice on June 22, 1694.  They took this landing date as another auspicious sign and climbed the promontory – the site of the current Philadelphia Museum of Art – to light bonfires and perform rites and rituals to expel evil spirits and demons.

At first they moved into private homes in the Germantown village and freely shared their knowledge with the nearby settlers and Lenni-Lenape tribe. Kelpius and his highly educated group of mystics practiced alchemy, botany, mathematics, and astronomy. They were trained as doctors and lawyers and many were talented musicians and astrologists.

Kelpius distinguished himself by performing the first regular ordination of an orthodox Lutheran clergyman in the Western Hemisphere. He set up a popular free school for boys (and girls) but his groups’ occult practices and rituals disturbed the civic and church community leaders, and the group was soon relocated deeper into the lower Wissahickon valley. Kelpius wanted more privacy to meditate and pray in seclusion so he accepted from Robert Whitpain 175 acres of land as his reward for legal services at the Frankfort Land Trust Company. In August 1694 William Penn’s Surveyor-General Thomas Fairman (possibly on Penn’s instructions) transferred the land to the monks in what is now called The Hermit’s Glen. This parcel is located on the west side of Wissahickon Creek one mile upstream from the Schuylkill River.  It reached as far as what is now the Walnut Lane Golf Course. 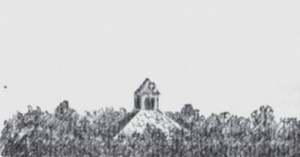 medicinal herbs. They started building their priory: a log structure consisting of a “saal” (communal worship area, with tabernacle), a small dining room (served by an outdoor kitchen), forty “kammern” (monks’ cells), and a second story belfry with window, used as an astronomical observatory.  Behind that little tower’s window the monks placed Johann Zimmerman’s telescope, through which they daily scanned the heavens for signs of The Woman of the Wilderness and the Second Coming. A Horologium type of astronomical clock instrument was used to study the skies which remains today at the American Philosophical Museum.

The tabernacle may have been located near the present-day Hermitage Mansion.  Although no remnants of the original structure remain, various local groups have engaged in academic research. Interest and support for restoring and preserving the possible original Wissahickon site has waxed and waned over the years.

Kelpius is believed to have lived alone in a small cabin or cave in the glen below his men’s residence. Some accounts speculate he may have dug the cave himself near the site of the current springhouse. He may have used this space to meditate and pray. 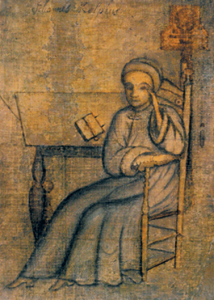 When the World Didn’t End
When the world did not end, Kelpius’s health began to fail.  By 1706 he spent most of the winter confined to his bed and finally succumbed to tuberculosis in 1708 at the age of 35.

Since his followers had been held together by their hope of Christ’s return, Johannes Kelpius’s Chapter of Perfection disbanded after his death.  The former brethren who stayed in the area assimilated into the Germantown community, married, and worked as occult practitioners and healers. Germantown residents frequently approached members for astrological advice.  The monks cast birth charts (“nativities”), and furnished prognostications based on planetary transits and progressions. Their presence gave rise to what became known as powwow, or hexing, the peculiar form of folk magic practiced in southeastern Pennsylvania. These versatile individuals not only taught school, composed hymns, and discovered underground water sources by virtue of the gift for dowsing;  but also worked as bookbinders for the Bible and The Ephrata Cloister’s 800-page hymnal.

The Enhanced Cave Today
The “enhanced cave” we see today is built into the gently sloping concave side of the Hermit’s Glen. It may be an old springhouse or root cellar and was restored around 1920 with a stone frame entrance, solid dirt floor, and stone and mortar walls and ceiling.

A local Rosicrucian woman placed a granite monolith outside the cave entrance in 1961. Meaning “rose” and “cross”, this worldwide mystical brotherhood claims to have secret wisdom dating to ancient Egypt and considers Kelpius the original American Rosicrucian. His writings reveal he was not a Rosicrucian so this cannot be authenticated.

The Hermit’s Cave is cared for by the Friends of the Wissahickon and the public is invited to explore the Hermit’s Glen and the cave. FOW offers annual guided walks and talks featuring the cave which are presented around Halloween when spirits roam abroad in the land. Please enjoy the Wissahickon with respect and observe our “Leave No Trace” approach to curating these important historic sites.