Home · Virtual Valley · Trails to the Past · Henry Houston Statue 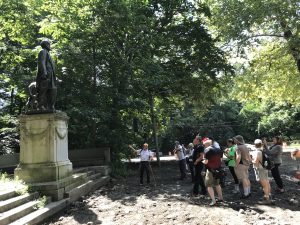 Did you know that there is a third statue in Wissahickon Valley Park- in addition to Tedyuscung and Toleration?  It is the statue of Henry Howard Houston, a nineteenth century railroad magnate, entrepreneur, real estate developer, and philanthropist.  It is located at the southeast corner of Harvey Street and Lincoln Drive, separated from the main body of the park by the trafficky Lincoln Drive.  The statue depicts a standing Henry Houston with his left hand resting on his Irish wolfhound.  He is wearing the clothing of a wealthy American of his time- a knee-length overcoat, suit jacket, buttoned vest, and bow tie, and holds his top hat and gloves in his right hand.   The bronze sculpture stands on a granite base. Four steps lead to a circular platform on which the statue rests and there is a continuous cement bench at the periphery.

The artist was John Massey Rhind, a Scottish-American sculptor who did many monuments throughout the United States, including the statue of Tedyuscung in the northern part of the park. The Irish wolfhound was probably one of those raised by Houston on his Chestnut Hill estate Druim Moir.  The statue was installed in 1900, a donation of the City of Philadelphia Fairmount Park Commission.

So why is there a statue of Henry Howard Houston in Wissahickon Valley Park?  First, a bit of history. 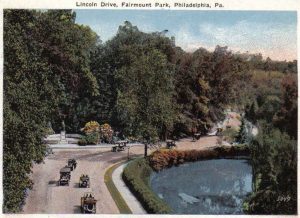 Henry Houston (1820-1895) was born into a prominent family in York County, Pennsylvania.  He only completed an elementary education. He came to Philadelphia in 1847 and entered the railroad business. He quickly rose to a prominent position in the Pennsylvania Railroad, in 1851 becoming its general freight agent in charge of organizing the company’s freight business.  Houston’s income greatly increased during the Civil War, when the Pennsylvania Railroad became a major transporter of personnel and supplies to the Union Army, and increased even further after the war when he was instrumental in developing a system of fast transcontinental freight lines. Houston also invested in transatlantic shipping, coal, iron, steel, gold, and oil after the war.  It was his oil investments, specifically in the Atlantic Refining Company of Philadelphia, that led to his greatest wealth.

It was this great wealth that enabled Houston and his heirs to expand the borders of Wissahickon Valley Park.  Chestnut Hill College historian David Contosta states that according to family tradition Houston was struck by the beauty of the Wissahickon gorge as it bordered the west side of Chestnut Hill and wanted to acquire the area for himself.  After first developing real estate in Germantown, he then moved onto the west side of Chestnut Hill. He bought land adjoining both borders of the Wissahickon Creek, but it was on the east side that he concentrated his efforts. Houston developed the housing community he called Wissahickon Heights (now called the St. Martins area), which included 3 estates directly adjacent to the park for him and his family.  He also was responsible for the construction of the Wissahickon Inn, now part of Springside Chestnut Hill Academy, and St. Martin-in-the-Fields Church and he provided land for the Philadelphia Cricket Club. Houston was instrumental in developing what is now the Septa Chestnut Hill West Line, providing rail access for his community to Center City. This rail line, along with other means of public transportation, still connects Center City Philadelphia with Wissahickon Valley Park. In the 1800’s Houston owned 3000 acres in the northwest section of the city extending into Montgomery County and was the largest landowner in this northwest section of Philadelphia.

But how did he come to have a statue of himself with his dog in Wissahickon Valley Park? It was originally presented by the Fairmount Park Commission in recognition of his donation of  land near where his statue is placed. But the contributions of Houston and his heirs extend beyond those eleven acres near Wissahickon Avenue and Lincoln Drive.

His daughters Gertrude Houston Woodward and Sallie Houston Henry and his son-in-law George Woodward donated land around the Cresheim Creek. You may have visited the ruins of  the barn of Buttercup Cottage on Cresheim Valley Drive. Houston established Buttercup Cottage as a summer vacation retreat for working women in 1889, making his daughter Gertrude the first board president.  Later his heirs gave the surrounding land to the city, part of the extensive holdings along the Cresheim Creek that the family gifted to Fairmount Park.

The largest parcel of park land contributed by Henry Houston or his descendents is part of the Andorra Natural Area.  In 1886 Houston established the Andorra Nurseries on part of the land he owned west of the Wissahickon Creek.   The nursery, under the management of William Harper, grew to be the largest on the east coast of the United States (and effectively landscaped Chestnut Hill and West Mount Airy.)  Eventually, Houston’s granddaughter Eleanor Houston Smith and her children sold 100 acres of what once was the Andorra Nurseries to Fairmount Park and then donated the money back to be used as a perpetual endowment for the Andorra Natural Area.

The Houston Meadow is a 48 acre forest and meadow habitat.  Its native grasses and wildflowers provide a natural environment for wildlife, specifically birds.  The Houston Playground and Recreation Center is named after Henry Houston’s son Samuel. 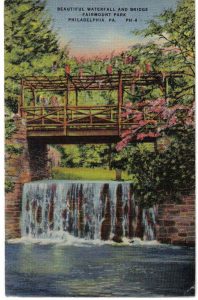 Henry Houston’s original gift of eleven acres became known as the Houston Ramble.  It was supplemented by his descendants and others with 6 more acres.  In 1900, with $30,000 given by the Houston family, the area was developed into a late Victorian type garden, with walks, trails, bridges, pergolas and 2 lakes.  Over the years the garden and its fixtures were neglected and deteriorated,  the lakes were drained and invasive plants took over.  The Houston Ramble is not marked and its exact boundaries can be unclear. The Friends of the Wissahickon, while not intending to bring the Ramble back to a Victorian garden, have been planting native species and clearing out some of the invasives.  The FOW has built and maintained the Monoshone Trail which traverses the Houston Ramble. They also attend to the area surrounding the statue by scheduling clean ups.

A GPS can always lead you via the streets to the Henry Howard Houston statue at Harvey Street and Lincoln Drive.  Finding it on a walk in the woods can be difficult without a guide.  Be on the lookout for the occasional FOW hike to the statue if you want to take a walk through the Houston Ramble to the forgotten statue of Wissahickon Valley Park.