Home · Virtual Valley · Trails to the Past · Forbidden Drive: Then to Now

Forbidden Drive: Then to Now 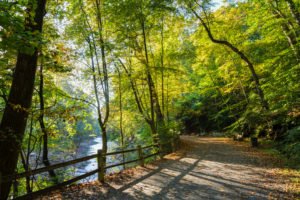 Artistically, history somewhat aside, the Wissahickon has been romantically written and sung about by poets, book authors and musicians who reflect upon the park’s serenity and beauty, often referring to its main boulevard of a trail—the Forbidden Drive—as a most inviting and invigorating experience.  Although the historically-prominent Edgar Allen Poe (1809-1849), Fanny Kemble (1809-1893) and others opined about the Wissahickon, modern singers also praise the park and its central dirt-and-gravel thoroughfare—Forbidden Drive—and scenery through song.

But what is Forbidden Drive and how has it evolved over time?

1687-1689:  The first stone-grinding grist/grain mill was situated at the joining of the Wissahickon and Schuylkill waterways just five miles north of the 1681-established Philadelphia.  The Wissahickon Valley was basically inaccessible for vehicular land travel which would be heavy-duty Conestoga wagons, pulled by oxen or horses, and, later, carriages and stage coaches.  The valley’s gorge had steep, difficult-to-travel, narrow dirt entrances leading to and from the valley’s mills to the high-up dirt thoroughfares of Ridge and Germantown Roads.  There was no continuous road paralleling the entire creek inside Philadelphia, PA until after 1826.

1826:  That year the huge rock outcroppings not far from the eastern end of the mouth of the Wissahickon Creek were blasted away to allow travel from Center City to the mills along the Wissahickon Creek, along a narrow road. Wissahickon Turnpike Company stock was issued for the construction of a better road in 1834 from the Schuylkill River for one and a quarter miles north beginning in 1840. 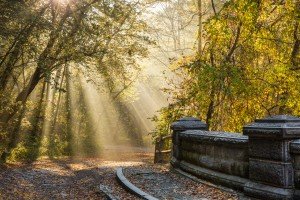 1840:  This phase of road-building (not blasting) from the Schuylkill River northward was begun in this year by the Wissahickon Turnpike Company.  It was to connect with the already established Wissahickon Turnpike that ended at a sharp turn of the Wissahickon Creek near the mill complex of Rittenhousetown near the mouth of the Monoshone Creek.  This newly established road section did not branch northward into the community of Mt. Airy, as it (Lincoln Drive) does today until years later.

This phase of the dirt-road building was prompted by industries popping up everywhere along the creek and its tributaries.  They needed an easier, more-level way to transport product by land out of and into the valley.  Since the terrain was not suitable for the laying of railroad tracks along the winding creek’s valley and the creek itself was too shallow for boat transport, a good creek-hugging road was a viable alternative.

1851:  At this time the turnpike’s commercial endeavor was instituted and associated with Joseph Middleton, president of the Wissahickon Turnpike Company and owner of a granite quarry between Bell’s Mill Road and Northwestern Avenue.

1854:  Pennsylvania permitted the city to contiguously encompass all of Philadelphia County in order to protect its drinking water sources.  Since the valley was taken over by the new Philadelphia Fairmount Park, established in 1867, the city government later bought the Wissahickon Turnpike and abolish its toll status, making it a free but still drivable Wissahickon Drive. 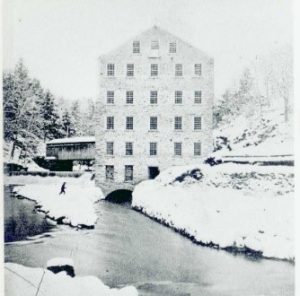 1856:  This private toll road was completed in its widening and lengthening for the benefit of the various mills that produced paper, cloth, carpets, gun powder, lumber, ground grain, vegetable oil, dyes and horseshoe cut nails.

Upon the road’s completion in this year, there were three vehicular/wagon entrance toll gates to this private pike:  1) Northwestern Ave, part of the Philadelphia’s boundary line in Chestnut Hill.  2) The entrance at the possibly-then-intersection of the present wilderness White Trail below Chestnut Hill Avenue (no longer connected).  This was the Thomas Mill Road for transport between Ridge and Germantown Roads on either side of the creek.  It now spans the creek as the Red Covered Bridge (1855).  And 3) where West Rittenhouse Street/Lane approached present day Lincoln Drive, near the Ten Box guard station, the southern-most entrance.

As an aside, the descriptive name of the dirt-and-gravel road changed over time from a road (1768-1857), turnpike (1851-68), drive (1869-plus), lane (1880s-90s), and back to drive (1923-plus).  In the 1920s, at least, it was also referred to as the “upper/lower” and “old/new” Valley Green Bridle Path by equestrian groups (horse riders and drivers), and also referred to as the “Main Footpath”.  Since the road was, initially, a privately owned business it was bought, sold, once put up for a sheriff’s sale, and was later improved (1937-1943) by the federal government during the Great Depression.  Additionally, the length and width of the road also changed via dynamite blasting. 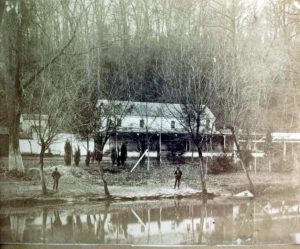 1870s:  The improved dirt-and-gravel thoroughfare through the Wissahickon Valley Park attracted roadhouses/inns to satisfy the increasing desire of the public—from the internationally famous to the locals—to enjoy nature and visit this wooded area after the mills were destroyed because of their polluting—the last mills to go were in the late 1800s to early 1900s.  Nevertheless, all of the inns, except the 1850-built Valley Green Hotel/Inn, slowly went out of business because Fairmount Park also started forbidding the sale of alcohol, a commodity not sold at Valley Green Inn.  Thus, those buildings, too, were eventually demolished in just 30 years. The only other Inn still standing today is Wissahickon Hall, located along the southern end of Lincoln Drive.

This Wissahickon Valley road then experienced a metamorphosis and was no longer an industrial one, but became more focused on the benefits of a wilderness retreat, tourism and general park use.

1876:  Twenty-two years after expanding its territory to include the Wissahickon Park, Philadelphia City sponsored the Centennial International Exhibition, the first official world’s fair, to celebrate the signing of the Declaration of Independence.  Although the event was mostly near Center City and along the Schuylkill River, the celebration also gave prominence to the tourist attractions along the nearby newly-named Wissahickon Drive. 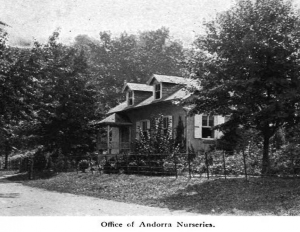 1886:  The Andorra Nursery established itself at the northern end of the Wissahickon Drive at Northwestern Avenue before the Drive became “forbidden” to motorized traffic.  The nursery stretched over to West Bells Mill Road and beyond, even into Montgomery County.  The nursery office later becomes the Cedars House Café.

Andorra eventually became the largest commercial nursery of trees and shrubs on the east coast and drew many visitors to the park and Wissahickon Drive. 1899-1924: As of 1899 motorized vehicles were forbidden on the upper portion of the Wissahickon Drive; that is, from Northwestern Avenue down to present-day Lincoln Drive. The reason given was due to the potential accident-causing “dangerous curves and steep embankments”. These reasons may also account for the remaining numerous portions of stone walls, here and there, along the road which seems to have no other explanation for their existence. From 1899 and on for 25 years attempts were made to remove this automobile traffic ban.

Eventually, the use and ambiance of the Wissahickon became both a commuting and community issue for the upper class neighborhood of Chestnut Hill. As early as 1910 the residents of Chestnut Hill did not want the new car craze— created by the popular 1908 middle-class-selling Model T Ford (which sold in the millions)—to potentially manifest itself in their quiet neighborhood. Cars remained banned in the upper end of the Drive, but within 10 years that closed upper drive was again being considered for paving and automobile travel.

Finally, in 1924, after nearly 13,000 protesting park goers, led by influential local equestrian groups (especially the Philadelphia Riders and Drivers Association [1912]), rallied in 1921, the entire length of the road was forever forbidden to motorized vehicles and nicknamed Forbidden Drive, though it is still officially known, as of 2022, as Wissahickon Drive. As a result, too, the surface of this trail-road remains erodible dirt-and-gravel today. 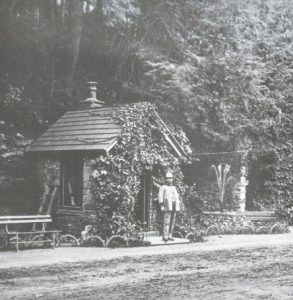 Mid-1930s-Mid-1940s:  During the Great Depression the federal government provided funding to hire a fluctuating 500-1000 locally-unemployed workers to repair and build facilities inside the Wissahickon Valley Park, especially along Forbidden Drive.  Those identifiable structures are still standing today in 2022.

2018:  Forbidden Drive was named the “Trail of the Year” by the Pennsylvania Department of Conservation and Natural Resources.

2019:  This year—among many—was just one outstanding example of preserving the physical integrity of the historic Forbidden Drive.  Being along a creek, as well as being subject to unstoppable spring water flowing from outcroppings in the hillside of the gorge across the Drive, this thoroughfare has continuously suffered from bank erosion.  But Friends of the Wissahickon, along with numerous public and private participants and donors were able to use unique and extensive “stream bank stabilization” efforts to save parts of the Drive from eventual collapse.