Home · Virtual Valley · Trails to the Past · Dewee House Marker 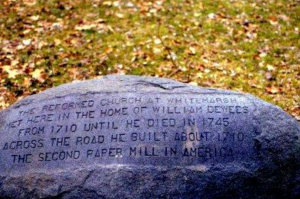 Located near Germantown Avenue Bridge across from Chestnut Hill College, visitors will see this large engraved stone. There are stairs leading you into Harper’s Meadow that will take you here. This marker sits on the former site of the Willem “William” Dewee’s (Dutch descent) home built around 1710. It acknowledges The Reformed Church at Whitemarsh (now St. Paul’s United Church of Christ in Ft. Washington) that worshipped in this home until William’s death.

William Dewees (1677-1745), or de Wees, the eldest son [sic] of Gerret Hendricks and Zytian de Wees, was born in 1677 at Lieuwarden, Province of Friesland, Holland. He, with his parents and brothers, Cornelius and Lewis, and sister Wilhelmina, emigrated to New York in 1688. Soon after they moved to Germantown where William was employed as an apprentice in the first paper mill erected in America. It was built and operated by William Rittenhouse, father of Nicholas Rittenhouse, who married William’s sister, Wilhelmina. This paper mill was situated on a small rivulet flowing into Wissahickon Creek. 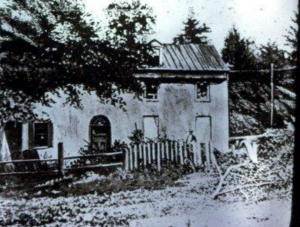 William owned 93 acres on the Wissahickon where he built the 2nd paper mill in America and the family’s home. William Dewees, Jr. (1711 – 1777) was one of 11 children. He married Rachel Farmar (Irish descent), who lived next door, in 1735. The couple built a home on the Farmar’s farmland and they had eight children of their own.

Around 1710, Rachel’s father, Edward, built and operated Farmar Mill (also known as Mathers Mill). Their water-powered gristmill was powered by the Wissahickon Creek and is located on Mathers Lane near Skippack Pike. Farmar’s father was a British army officer living in Ireland who had purchased 5,000-acres of land from William Penn. This tract contained most of what is present-day Whitemarsh Township. Farmar’s father died before he could move his family to America, but his mother brought the family to America in 1685, settling in the area of present-day Fort Washington.

William Dewees, Jr. became High Sheriff and Justice of the Peace for Philadelphia from 1757 to 1770. In 1776, he was the one who uttered the words “Under the authority of the Continental Congress and by order of the Committee of Safety, I proclaim a Declaration of Independence.” On July 4th, of that same year, the delegates to the Second Continental Congress met and approved a Declaration of Independence drafted by Thomas Jefferson. 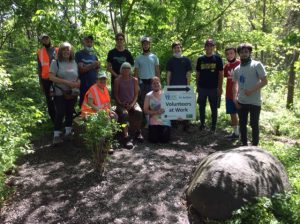 In 1777, William registered for military service but died that same year in Germantown, at the age of 66. Rachel died in 1793 at the age of 77. Both were buried in the Upper Burial Grounds, established in 1693. It’s one of the two oldest cemeteries in Germantown and one of the oldest in the Philadelphia region.

On April 28th, 2021, a group of Volunteers for the FOW, led by David Bower and Trail Ambassador Cathy Schweiger, created a gravel path lined with some pieces of trees below the steps on Germantown Avenue. This gravel trail will take you to Dewees House Marker and visitors can take a seat on one of the tree stumps the volunteers put into place.