Home · Virtual Valley · Trails to the Past · Cresheim Valley Pergola 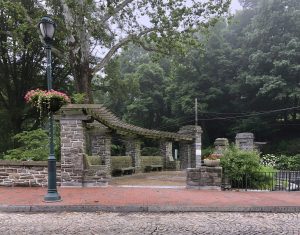 This handsome work of Wissahickon schist and timber was dedicated in 1909 and has a lot to say.

On a small plaza with stone benches, there are tiled reliefs of a turtle, fish, mill, and the coats of arms of William Penn and Francis Daniel Pastorius, founder of Germantown. There’s an old water fountain and a horse trough, plus seasonal plantings.

Facing the corner of Germantown Avenue & Cresheim Valley Drive is a tablet that reads: “This valley was named Krisheim by the Germans of the Rhine who bought the land from William Penn in 1687 and called it after their native village. Germantown Road follows the old Indian trail.” The adjacent bridge carrying the present day 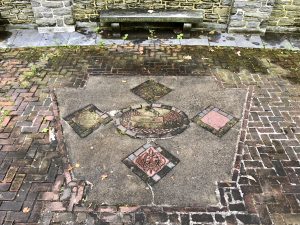 Avenue over Cresheim Creek was built in 1884. That same year, Pennsylvania Railroad opened its Chestnut Hill (West) line, and it included a branch that spurred toward Fort Washington after Allens Lane. The branch’s first station stop was Germantown Road; its building stands directly across the Avenue.

On the pergola’s column closest to Cresheim Valley Drive, FOW placed a plaque in 1945 to commemorate a grove of trees planted to honor the life and service of Samuel Baxter, longtime Fairmount Park arborist.

Most of all, the Cresheim Valley Pergola is a celebration of collaboration and unity. T 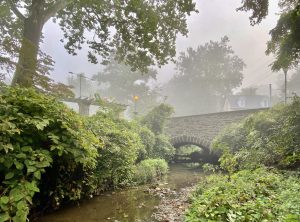 he pergola stands where Chestnut Hill and Mt. Airy come together — and where an ancient road of human activity and an ancient creek through Mother Nature’s dominion exchange pleasantries on their respective journeys.

The pergola and the land on which it resides were donated by the Houston and Woodward families in 1909. The Chestnut Hill Rotary Club led a restoration of the pergola in advance of its centennial in 2009. The first phase of the Cresheim Trail opened three years later, with a trailhead just steps from the pergola. The trail will eventually follow the route of the old Fort Washington train out to Stenton Avenue and into Montgomery County.