Up at the Tree House… Meadows, Milkweed, & Monarchs 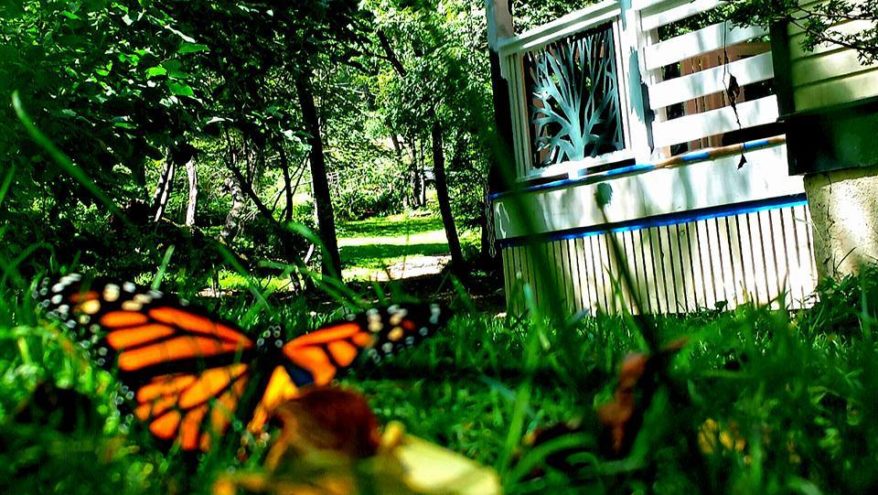 For the past two summers at the Tree House, we’ve gathered a handful of monarch caterpillar eggs from the milkweed patch in Andorra Meadow and brought them inside for observation in a small microcosm full of milkweed plants in which they can flourish.

It has been such a pleasure getting to watch the full monarch life cycle up close, starting with the minuscule eggs glued to the underside of milkweed leaves. Within three to five days we had newly hatched caterpillars moving slowly around their leaves, munching away with tiny mouths and rapidly expanding bodies.

Caterpillars’ sole purpose is to eat. A grown caterpillar can consume an entire milkweed leaf in eight minutes, and our caterpillars had us running to the meadow to replenish their milkweed supply quite a few times.

Once the caterpillars were big, colorful creatures, with yellow, white, and black stripes, they began lifting their heads, looking for desirable spaces to hang upside down and form their jewel-like chrysalides. Watching them scoping for good locational prospects was amusing. You could almost see the thought bubbles emerging from their heads, analyzing the situation above them. When they are ready, the caterpillars hang upside down in a shape that resembles a “J.”

While it looks like the chrysalis is forming around the caterpillar, in fact, the chrysalis has already formed beneath the final layer of caterpillar skin. When it’s ready to enter the pupa phase of its cycle, it sheds its old skin to reveal the chrysalis hidden below. All of the old skin is gradually pushed to the top of the chrysalis. In the last step of the chrysalis reveal, it wiggles around until the skin falls off. This was one of my favorite parts, as it truly looked as if the chrysalis was dancing, adept and energetic, to the beat of its own transformation soundtrack.

Inside the chrysalis, the caterpillar turns into a sort of genetic soup, completely reconfiguring itself into a butterfly from this matter. While the caterpillar and butterfly seem to have no relation to one another—they have different diets, habitats, and different styles of transportation—studies have shown that butterflies remember their lives from when they were just naive, prepubescent larva.

Inside the chrysalis, the butterfly tunes into its genetic programming that communicates where to fly in Mexico, how to get there, and what steps are necessary to ensure a successful flight.

The chrysalis we observed became more translucent as the monarch formed more fully within it, until one day we could see right through the thin walls of the chrysalis to the folded-up butterfly inside.

When the butterfly decides to emerge, it takes only a couple of minutes for it to tear open the bottom of the chrysalis and climb out, head first, to make its grand debut.

At first, its wings are wet and crumpled, so it spends its time drying, pumping fluid from its thorax into the wings to stretch and plump them. Meanwhile, the butterfly is also using its labial palps (butterfly mouth) to construct its proboscis (like a tongue) which initially hangs in two parts, then becomes one as the butterfly hangs and dries.

Butterflies that emerge after mid-August are the fourth generation of those monarchs that left Mexico that spring. This generation of eastern North American monarchs will instinctively fly thousands of miles toward the Oyamel Fir Trees in Mexico’s Sierra Madre Oriental mountain range to overwinter. Traveling up to 3,000 miles, they migrate farther than all other tropical butterflies worldwide.