Home · News · Nature · Up at the Tree House: Firefly Fireworks!

Up at the Tree House: Firefly Fireworks! 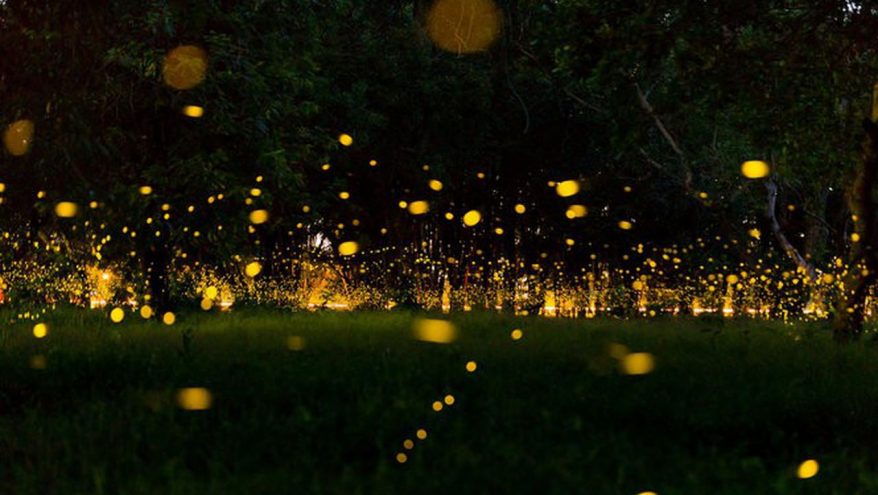 On any given summer evening in the Wissahickon, the sun sets after a hot day, bats replace the birds in the sky, katydids set the soundtrack, and the lightning bugs, or fireflies, put on a show with every flicker.

My fascination with fireflies began as a child. I would chase their lights across lawns and watch them glow in my hands. When they disappeared, with disappointment I asked my dad where they went. “A giant hand comes up and pulls them back underground,” he’d say.

As an adult, my fascination was reignited when I worked at my first Firefly Fireworks program at the Tree House. Every part of the forest and meadow flickered with light. I have been chasing fireflies ever since—in the Wissahickon and across the state.

Fireflies are essentially beetles whose abdomens light up. However, the more I learn, the more complex these beetles become.

There are over 2,000 species of fireflies in the world, and a few dozen in Pennsylvania. Many fireflies are bioluminescent, or produce light, in some or all of their life stages. The chemical reaction of oxygen, mixing with the compounds luciferin and adenosine triphosphate (ATP) and the enzyme luciferase (responsible for the signature yellow light) in the fireflies’ abdomens produces their light, which is cold, meaning no heat, and which they can control.

In the meadow, seemingly hundreds of thousands of light flashes can be seen in the dark at any given moment. Fireflies flash to find their mate and warn predators. Look closely the next time you see them, and you’ll notice different flash patterns and colors. Each species has a specific pattern that the male flashes while flying to the females in the grass, who then flashes the pattern back. Firefly eggs and larvae will live in the soil for years before completing metamorphosis. Adults emerge from late May through early August, peaking in early July. They live only for a few weeks.

Like bees and butterflies, firefly populations are decreasing because of insecticide use and habitat loss. If you keep your yard pesticide-free, allow grass to grow longer, and turn porch lights off at night, you will help fireflies thrive and keep the magic of summer alive.

The most commonly seen firefly is called the Big Dipper (Photinus pyralis) because it dips as it flashes, creating a distinctive J shape early in the evening. Another common firefly is the Pennsylvania firefly (Photuris pennsylvanica), our state insect.

The Synchronous Firefly (Photinus carolinus), thought to only exist in the Smoky Mountains, was confirmed in Pennsylvania’s Allegheny National Forest in 2012. They flash like twinkling lights, then, suddenly, stop flashing. Last summer, I traveled to Western Pennsylvania with Trish Fries, Environmental Education Specialist, and Chelsea Heck, former Watershed Educator, to see these fireflies in action and celebrate the annual Pennsylvania Firefly Festival. In the dark wood of the Pennsylvania Wilds, the Synchronous fireflies flashed while the Chinese Lanterns (Photuris versicolor) held their light and hovered above the tall grass. The darkness also brought out the glow of millions of stars.

A month later, our team noticed a new-to-us flash in our own forest. This firefly’s light grew intensely bright, then darted downward. After some research, we learned it was a July Comet (Photuris lucicrescens). We traveled 300 miles to see the unique glow of fireflies, only to find their glow in the Wissahickon is just as glorious!