From the Archives: Toleration Statue Has Rich History 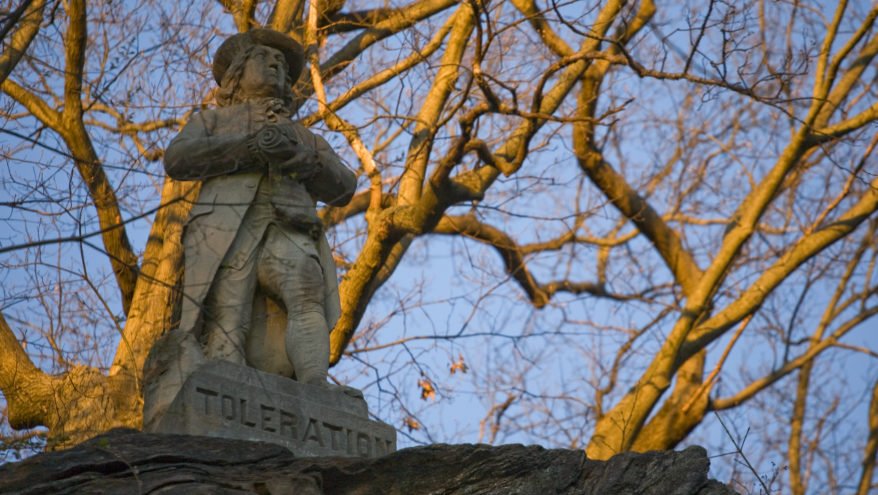 One in an occasional series in which FOW publishes articles that appeared in our publications in the past, and still resonate with us today. This piece was written by Barbara McCabe for FOW’s Fall 2004 Newsletter. Barbara was the FOW Newsletter Editor and spent 20 years running Philadelphia Parks & Recreation’s Stewardship program as their Director of Strategic Engagement.

Like many sites within the Wissahickon, the Toleration Statue has a rich history attached to it. Erected in 1883, the marble statue of a man in Quaker clothing is situated on a ridge on the eastern side of the Park just north of the Walnut Lane ridge.

Standing atop Mom Rinker’s Rock, the nine-foot-eight-inch statue has the word “Toleration” carved into its four-foot-three-inch base. Believed to be a likeness of William Penn, the statue’s title reflects the Quaker beliefs of liberty and conscience, which Penn espoused.

The statue, which was created by late 19th century sculptor Herman Kirn, was brought to the site by landowner John Welsh who is reported to have purchased the statue at the Centennial Exposition in Philadelphia. Welsh, a former Fairmount Park Commissioner and U.S. Ambassador to Great Britain, donated his land to the Park prior to his death in 1886.

Mom Rinker’s Rock, the schist outcropping on which the statue is perched, can trace its name back to the American Revolution and a patriot known as Molly or “Mom” Rinker. As the story goes, the British troops, who were encamped just a few miles away in Germantown, took little notice of the old woman as she sat on the rock peacefully knitting. They didn’t realize that Rinker inconspicuously was dropping balls of yarn containing messages about British activities onto the ground below. Watching from across the creek, the Green Boys of Roxborough, an irregular band of supporters of American independence, would retrieve the messages and relay them to General Washington in Valley Forge.

As the years passed, Mom Rinker became the stuff of legend with various storytellers casting her as a witch who used the rock as a launching pad for her nightly broomstick rides. “From this rock towering over the dark waters of the Wissahickon, she nightly mounted her broomstick and set off on her weird flights,” according to a narrator named Mr. Meehan who was quoted in The (Philadelphia) Record in 1901. “But, one night, whether owing to excessive indulgences in the witch’s revels or to some other cause, instead of soaring from the rocks, she fell — the sharp crags dashed the life out of her — and the waters of the creek toyed with her lifeless body.”

While the Toleration Statue is considered one of the “greatest monarchs” in the Wissahickon, the statue, which is visible from across the creek on Forbidden Drive, attracts fewer visitors than the more accessible Tedyuscung statue. However, with a little perseverance, the statue can be reached from both the Orange Trail, which runs directly beneath the statue, and from Park Line Drive in Mount Airy above.

A small, unmarked trail off the Orange Trail – about a quarter mile south of Kitchen’s Lane – leads up to the Toleration Statue on the ridge above. The statue can also be accessed from an unmarked trail off Park Line Drive in Mount Airy. Walking into the Park from Park Line Drive, a path leading downhill to the left leads to the site of the Toleration Statue on the right.

(The historic information for this article was derived from the Chestnut Hill Conservancy & Historical Society’s Wissahickon Collection.)