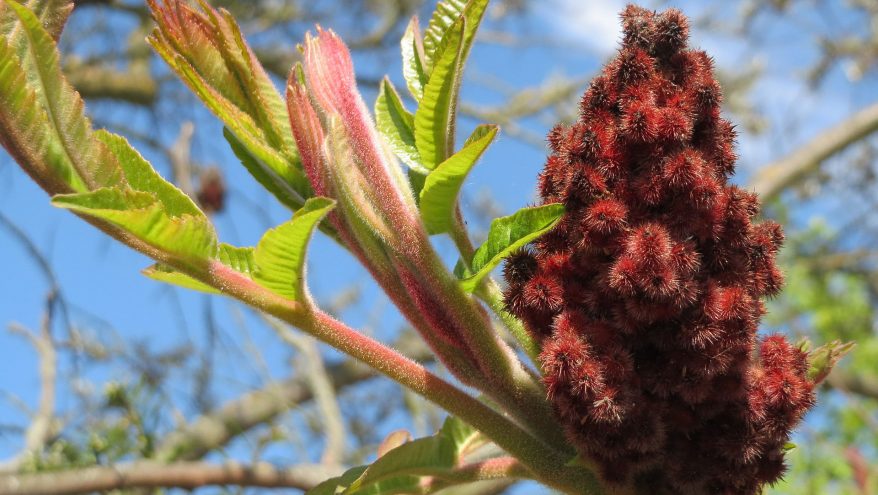 Autumn doesn’t have to mean that opportunities for harvesting fresh local fruit are over; there are still important berries to be found! One crowd favorite you can find locally are the berries of the staghorn sumac tree (Rhus typhina), native to Eastern North America and known for their velvety red clusters.

Its hairy stems resemble the horns of a male deer, from which it gets its name. They grow best in disturbed, well-draining soil and full sun, and are often found in meadow-like environments. Because of its ability to grow in such poor soil, it serves as an important agent in environmental rehabilitation. In late summer/early fall, the sumac’s fruit grows red and full, ready to be plucked and savored. Make sure to taste a berry before claiming a cluster to ensure ripeness, marked by its tangy, lemony flavor. The staghorn sumac is not to be confused with poison sumac (Toxicodendron vernix), which has white berries and smooth stems, and is found in wetland habitats. (Seriously, don’t eat that!)

Sumac is a popular herb and dye in the Middle East, often used when making the spice Za’atar and cooking with white meats or fish. In North America the berries are more commonly served as a delectable tea, casually known as “sumac-ade.”

One of the most interesting things about the staghorn sumac is the medicinal properties it carries. The uses for the plant are seemingly endless when referenced in Native American medicine—as a treatment for diarrhea, blisters, asthma . . . the list goes on.

Studies are now being done on the measurable benefits of sumac with patients who live with type 2 diabetes. One study concluded that sumac significantly decreases blood sugar levels and susceptibility to cardiovascular disease over just a three-month period. What we know for sure is that sumac is

While picking plants in the Wissahickon is not permitted, next time you see these velvety treats in a legal harvesting zone, cherish the bounty. Soak some mashed berries in water for 24 hours, strain though a fine mesh cloth to separate the tea from the fruit’s fine hairs, and pour that refreshing elixir over ice for a delicious, healing tea in the waning heat of September!

Maris Harmon is a Summer Intern at the Wissahickon Environmental Center.