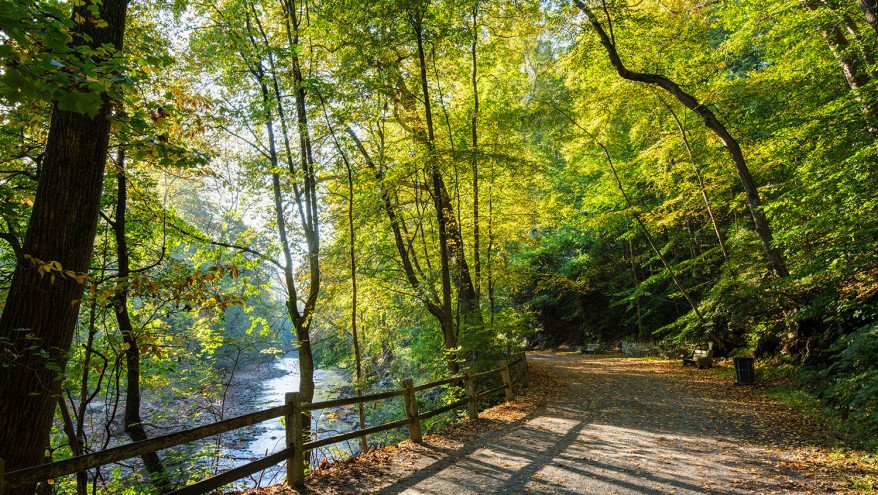 “This trail truly is among so many Fairmount Park gems, and one that shines brightest for the thousands of hikers, bikers, anglers and others who travel it each year,” Dunn said.

“For decades, Friends of the Wissahickon has been working hard to make a great trail even better. It’s all here. Quality, benefits to the region, and a strong volunteer network and multitude of partnerships qualify Forbidden Drive to be singled out in this fifth year of very special recognition.”

“We’re thrilled that the beautiful and historic Forbidden Drive has been named Trail of the Year,” said Maura McCarthy, executive director of Friends of the Wissahickon. “The name belies this urban oasis that welcomes visitors of all ages on foot, bikes, or horseback to enjoy the wonders of nature that Friends of the Wissahickon work to conserve.”

Pennsylvania is a leader in trail development, providing its citizens and visitors with more than 11,000 miles of trails across the commonwealth to enjoy, from gentle pathways threading through miles of preserved greenways, to remote, rugged trails scaling the state’s magnificent mountains.

Each year, the Pennsylvania Trails Advisory Committee designates a Trail of the Year to help build enthusiasm and support for both large and small trails, and raise public awareness about the value of Pennsylvania’s trail network.

Designated a National Recreation Trail in 1975, Forbidden Trail connects users with a rich history through many historic landmarks, 50 miles of natural surface trails, and a regional trail network that takes them into Pennsylvania’s countryside on the Schuylkill River Trail (with access to state parks), and The Circuit (with a link to the East Coast Greenway).

The Wissahickon Valley Park has been celebrated in poetry and in paintings. In 1868, Fairmount Park acquired the 1,800 acres of the Wissahickon Valley to preserve the purity of a then-city water supply. Mills and taverns were demolished, but the dams remain, telling the story of the industry that was once there.

Friends of the Wissahickon (FOW) works in partnership with Philadelphia Parks & Recreation, organizations, and volunteers to maintain the park and its trails. Today, the Wissahickon Valley is viewed as among the most natural places in the City of Philadelphia, and is visited by more than 1 million people each year. FOW partners with 40 or more organizations annually, and one thousand volunteers a year, including 15‐20 volunteer groups, who contribute over 12,000 hours annually toward maintaining Forbidden Drive and the park.

The Pennsylvania Trails Advisory Committee is charged with implementing the recommendations of the Statewide Comprehensive Outdoor Recreation Plan to develop a statewide land and water trail network to facilitate recreation, transportation, and healthy lifestyles. The 20-member DCNR-appointed committee represents both motorized and non-motorized trail users and advises the commonwealth on use of state and federal trail funding.

For more information on Forbidden Drive — named long ago when it was closed to motor vehicles — visit the FOW website.

For more information about Pennsylvania trails, visit the Explore PA Trails website. More than 600 trails covering almost 12,000 miles in Pennsylvania are featured on the site.

In 2017, DCNR named Montour Trail in Allegheny and Washington counties as Pennsylvania’s Trail of the Year.

Tags Forbidden Drive, trail of the year
Get involved- Become a member today!