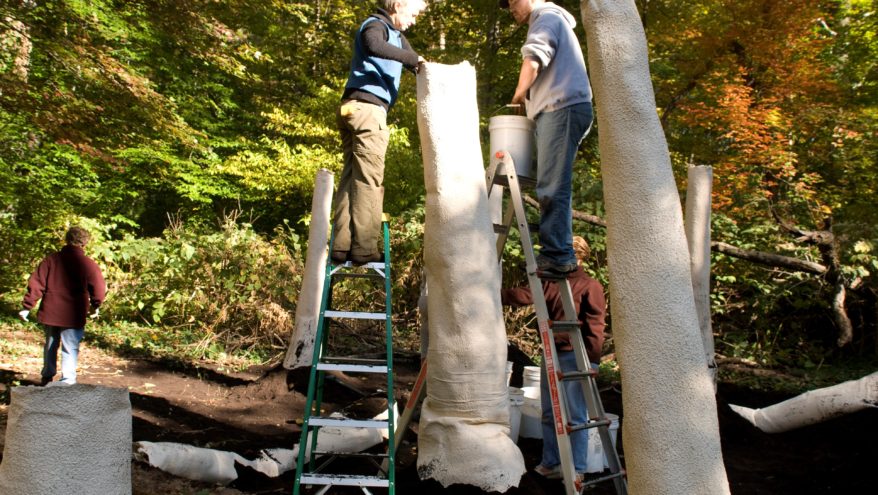 This year marks the tenth anniversary of GROVE, the art installation created by Louise Barteau and installed in Carpenter’s Woods near the corner of Sedgwick Street and Wissahickon Avenue in 2007. (See the photo above.) Dedicated to her late husband, Bill Chodoff (1943-2007), it was originally an arrangement of hand-made paper trees that considers and questions perceptions, change, disintegration, death, decay, and care-giving.

GROVE was “planted” in the fall of 2007, when Barteau led volunteers in clearing the site of invasive plants, such as Japanese knotweed, and arranging the paper trees and filling them with compost. The trees were left to degrade over the winter, a process she monitored and recorded on her website treemaker9.com.

In the spring of 2008, she led volunteers in planting five young oak trees to take their place. Barteau returns periodically to care for the site with the Friends of Carpenter’s Woods. Below are her comments after leading volunteers in caring for GROVE on Love Your Park Day in May of this year. You can learn more about GROVE in FOW’s Winter 2007 (p. 8) and Summer 2008 (p. 11) Newsletters. 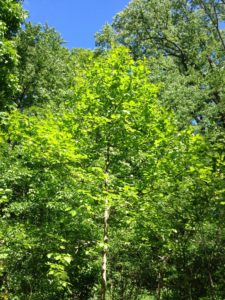 I hope the rest of Love Your Park week went as well as our Sunday walk. Six folks came on Sunday to the GROVE walk/talk to very kindly check up both on me and the trees. It was very nice and only rained on us at the very end.

There has been a lot of change at the GROVE site this year. The ancient dead tulip tree next to the path finally fell—but very kindly fell away from the trees we have planted over the years and without disturbing the sweet Cicely (Osmorhiza berteroi) growing at its base. A friend was in the park when the old tree fell, and reported it was loud and scary.

There are three young trees pushing up to claim the center light and space of the GROVE site—the one original swamp white oak (Quercus bicolor) that Erica Brendel saved, a box elder (Acer negundo) that we planted, and an American sycamore (Platanus occidentalis) that was planted by Curtis Helm of Philadelphia Parks & Recreation in the second big planting. The attached photo shows the three trees side-by-side, with the lemony yellow foliage of the swamp white oak in front and clearly visible. Two nearby smaller American hornbeam trees (Carpinus caroliniana), also planted by Curtis Helm, are doing very well also.

A small American holly (Ilex opaca) was about to flower. The elderberry (Sambucus nigra) has finally really established itself and will flower and fruit this summer. The serviceberry (Amelanchier spp.) has already flowered and is on schedule to berry in June. Native blackberry (Rubus allegheniensis) is in flower. A trio of cinnamon ferns (Osmunda cinnamomea) are doing very well, as are swamp cabbage (Symplocarpus foetidus), 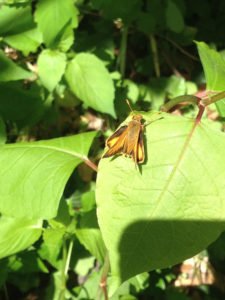 Jack in the pulpit (Arisaema triphyllum), and jewelweed (Impatiens capensis). The last two are very sensitive to foot and dog traffic, and without the fence there has been some trampling.

Some of the trampling was done by me to remove Japanese knotweed (Polygonum cuspidatum) and garlic mustard (Alliaria petiolata). I was surprised to find that the ground was quite firm underfoot after substantial rain and wondered if the roots of our trees and plants have had the effect to stabilize the ground which was very wet and muddy for years following the removal of the knotweed. I did not remove all of the knotweed or all of the garlic mustard this time intentionally, choosing to leave some in the places where I felt I would cause greater damage in removal than in letting it be for now. I will be back later in the summer to finish the work after the nesting season.

GROVE was full of life—spiders, moths, butterflies, pollinators of all shapes and sizes, and a lovely garter snake sunning himself against a log. I caught the attached photo of a Skipper (I think it is a Least Skipper but could use confirmation) using a Japanese knotweed leaf (IRONY!) as a platform to rest on. A new sighting for me in GROVE.

Sadly, the white ash (Fraxinus americana) that has looked over GROVE has taken a turn for the worse this year. It stands on the far side of GROVE next to a catalpa (Catalpa Scop.) that also looks stressed. The catalpa is less of a loss, but I wondered why both of them are suddenly looking so poorly. There is also a young Norway maple (Acer platanoides) growing next to a red maple (Acer rubrum) that should be removed while it is still easy to do so.

As always, I learn about and see more plant and insect life every time I come and work there.

Thank you again for including me in the events at Friends of Carpenters Woods Love Your Park Week!