Home · News · Nature · An Iconic Tour Everyone Will Enjoy

An Iconic Tour Everyone Will Enjoy 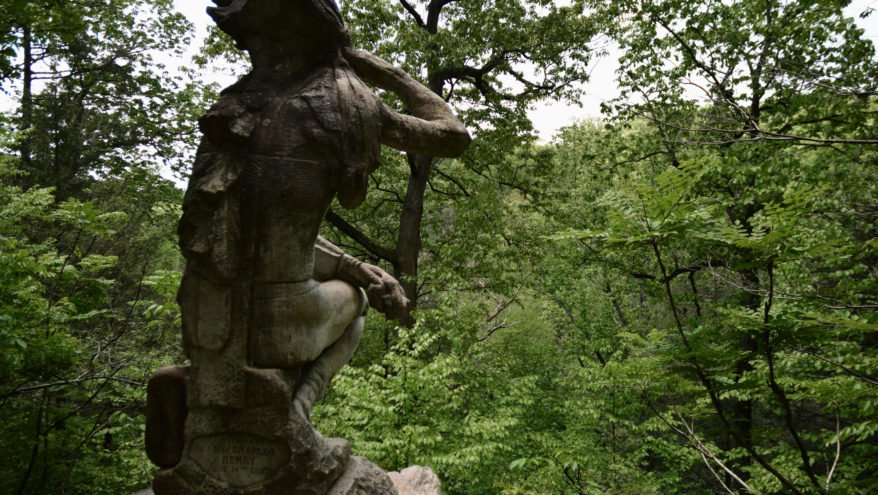 The trailhead at Rex Avenue is surrounded by some of the most recognizable symbols of Wissahickon Valley Park and is a great starting point for a quick ramble up and down the hills of the valley. There is ample street parking on Seminole Street at Rex Avenue. But it’s more convenient to take SEPTA, the Highland Station on the Chestnut Hill West line just a block away! To reach this trailhead from the SEPTA station, head northwest on Seminole Street and then make a left on Rex Avenue to hike downhill and into the park. This is a multi-user route, so please be courteous and follow proper trail etiquette.

There are many special points of interest to see here, the first being the grand Tedyuscung Statue. Take the first right off the main trail and follow the White Trail up the hill and through two switchbacks to reach this icon of Wissahickon Valley Park. Situated on what is often referred to as Council Rock, a site where the Lenape Tribe was believed to have gatherings, this statue was commissioned by Mr. and Mrs. Charles W. Henry and carved in 1902 by John Massey Rhind (1860-1936) as a generic tribute to the natives of the Wissahickon Valley. This statue was mistakenly referred to as Tedyuscung, thought to be an outspoken member of the Lenape tribe, at the commemoration of the statue and the name stuck. Read more about the Tedyuscung Statue in an article by Trail Ambassador Bruce Wagner here on page 6 of FOW’s Summer 2010 Newsletter.  Spend some time here enjoying the spectacular views from this natural rocky outcrop at one of the highest points in the gorge.

Continue northwest on the White Trail, and enjoy some recent trail improvements by FOW volunteers and contractors and an impressive stand of hemlock trees. In about a half mile, take your first left to head downhill to another major icon of Wissahickon Valley Park, the Covered Bridge. Once one of five covered bridges that existed in the park, it is now the only covered bridge in Philadelphia and the only one remaining within the boundaries of a major city within the United States. Originally built in 1737 to enable the transportation of barrels of flour from a nearby grist mill, the bridge was restored in 1938 by the Works Progress Administration (WPA) and again in 1999, when a portion of the bridge’s roof collapsed after an oak tree fell across Forbidden Drive. This last restoration was funded by the Fairmount Park Commission (now Philadelphia Parks & Recreation). Around this time, substantial improvements were also made to Thomas Mill Road and the various trails connecting to the Covered Bridge by FOW and the Fairmount Park Commission. You can read more about the history of the Thomas Mill Road Covered Bridge here. With a picnic area nearby this is the perfect spot to rest and take some pictures, the bridge is a remarkable  subject in any season!

Turn left on Forbidden Drive and in a half mile you will reach the Rex Avenue Bridge and another lesser known Wissahickon icon, the stone stairs and arch at Rex Avenue. Fun Fact: This area of the park was featured in M. Night Shyamalan’s film The Last Airbender. Hike back up the hill to reach the starting point and wave to Tedy on your way out!