Home · News · Wellness · Get off the Treadmill . . . and Into the Wissahickon

Get off the Treadmill . . . and Into the Wissahickon 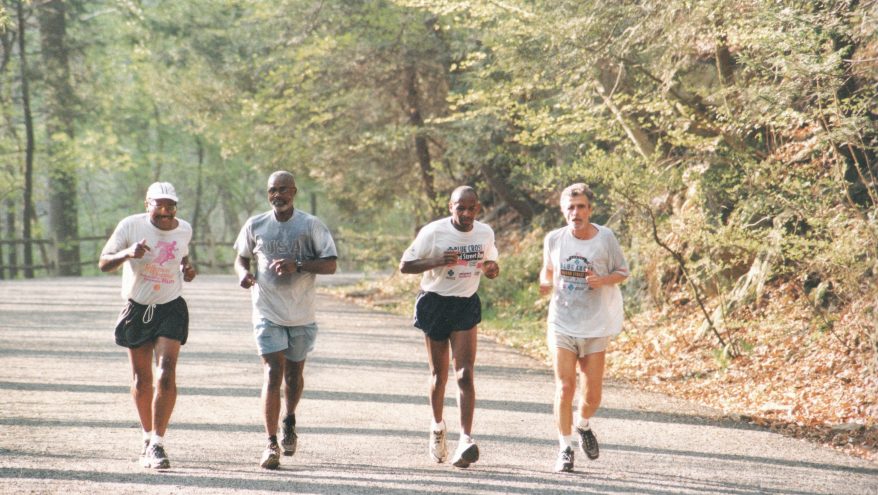 FOW Board member and volunteer David Dannenberg weighs in on running in the Wissahickon versus a gym. Which do you think he prefers? This is not the first time an FOW Board member has written on the benefit of the outdoors to maintain good mental and physical health. After reading Dannenberg’s take on the topic, check out this article by Bettina Hoerlin in FOW’s Spring 2008 newsletter.

It is always a good day to be in the Wissahickon.

I took a nice long jog in the park today. It astounds me that people will drive to a gym to run on a mechanical treadmill or “climb” on a stair stepper, under the glow of fluorescent lights, in front of a television spewing nothing of merit, when they can get a better, more fulfilling workout in the Wissahickon where you can smell the trees, the decaying leaves, and enjoy the weather, maybe hear the birds, and be immersed in three dimensional beauty no human hand could ever produce. Okay, so you have to go home sweaty because there are no showers by the trail. But the out-of-doors is much better for the body and soul.

Really, doesn’t that beat the gym? And it is open sunup to sundown and accessible from so many places ̶ all you need is the right clothing.

I acknowledge that treadmills have their uses, and it is arguably easier to wear shorts and a t-shirt in a climate-controlled room regardless of season. But it seems to defeat the purpose of exercising to limit oneself to such artificial environments and activities. And it ain’t much fun either.

Once, when I was clearing fallen trees from a path with FOW, I suggested to an appreciative passerby that he help me out. He replied, “No, I have to go work out.” I stifled my laughter. Had he stayed and lent a hand, he could have had as rigorous a workout as anyone could have wanted and he could have actually accomplished something. Compulsion; I am not immune to it, I admit. But c’mon. He didn’t look as if he was preparing for Olympic competition.

Studies have shown that exercising outside is actually better for you; running in the real world is better than running on a treadmill. I am not making this up. A Stanford-led study recently published in the Proceedings of the National Academy of Sciences found quantifiable evidence that walking in natural surroundings could result in a lower risk of depression. It is bad enough that many people feel that they live their lives on a metaphorical treadmill; choosing to spend time on a real treadmill is to sacrifice oneself for no good reason ̶ except perhaps irony.

So go outside and spend some time in your Wissahickon Valley Park. It looks good, it feels good, and it’s good for you!

By David Dannenberg, FOW Board member and volunteer