From the Archives: Birding is for . . . Everyone! 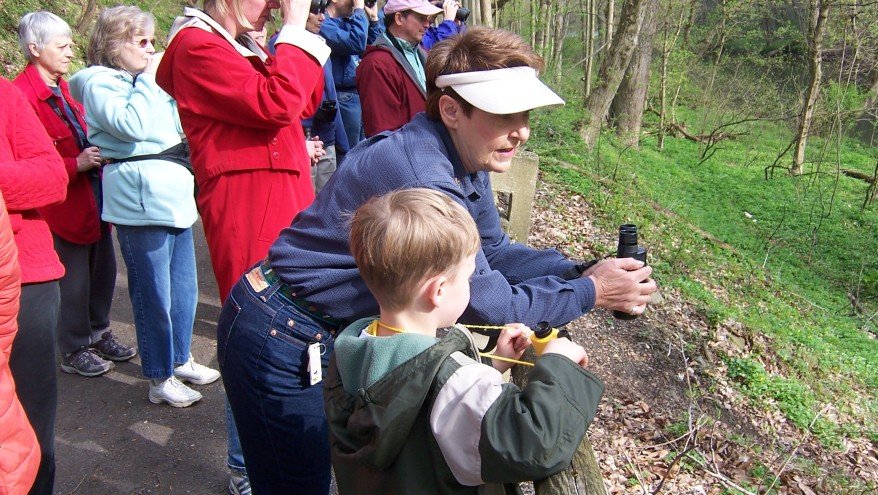 One in an occasional series in which FOW publishes articles that appeared in our publications in the past, and still resonate with us today. This piece was written by Steve Lawrence (1921-2012) for FOW’s Spring 2008 Newsletter. He was an FOW Board Member, Chair of the Wildlife Committee, and an avid bird-watcher with a life list of 600 U.S. species gathered from his visits to 49 states. He also was a member of the Delaware Valley Ornithological Club, the Wyncote Chapter of the Audubon Society, and the American Birding Association.

For many years, birding in America was a man’s world. The ornithological publications, prints, paintings, and research were all accomplished by the predecessors and contemporaries of John James Audubon (1785-1851) ̶ and all were men. The first amateur birding organizations were also for men. Probably the oldest and still one of the outstanding birding organizations in America, the Delaware Valley Ornithological Club (DVOC), founded in 1890, did not change its membership requirements to admit female members until 1983.

Those of us born earlier in the last century, such as myself, can remember when “bird-watching” went from being a male-dominated sport to one for middle-aged women. I became interested in birding in 1959 at the age of 35, when my family and I moved to Mt. Airy, and I took a position with the Insurance Group of North America. But, male bird watchers did not generally discuss their hobby with co-workers at the office. Gradually, I talked about it to some colleagues, and long before I retired, almost all of my co-workers not only knew I was a birder, but that I took my binoculars with me on almost every business trip.

During those years, a friend gave me a cartoon at the time that sums up the attitude toward male birders at the time: Seven people stand under a tree looking up. Six dowdy-looking middle-aged ladies are fixing their binoculars on a spot above, and one man holds a bottle of whiskey he is drinking from at the same angle. My friend wrote my initials with an arrow to the drinker. I still have it—the cartoon, not the bottle.

Today, not only are there no male-only birding organizations, but the gender-gap among members continues to shrink, and the leadership roles of women members continues to grow. The leadership of women in Philadelphia’s birding community is obvious and growing. FOW would not have had so many successful birding walks in the Wissahickon without the participation of [former] Fairmount Park’s Director of Environmental Education Debbie Carr or the Wissahickon Environmental Center’s staff, [such as] Trish Fries. Jane Henderson, [former] chair of the Wyncote Chapter of the National Audubon Society, has led many birding programs and published numerous articles on the subject.

Most of my birding in the Wissahickon has occurred in Carpenter’s Woods. Over the years, I have enjoyed many morning walks and learned a lot from my neighbors, such as Dr. Erica Brendel, the first woman member of DVOC in 1983. She is an amazingly swift-sighted identifier of birds and shares her knowledge graciously. As is true with more and more birders these days, she has traveled to every continent, including Antarctica. Another leader in birding living near the Wissahickon is Marylea Klauder. In 1988 she assumed the responsibility of managing the annual, two-month hawk watch at Militia Hill in Fort Washington State Park. This is a difficult job that would not have come together had it not been for her dedicated leadership. And then there is Ruth Pfeffer, an excellent birder who started a mid-life career as a birding leader and speaker, occasionally for FOW.

According to many surveys, birding has more participants than any other leisure time activity in America, and a new, young group of leaders ̶ scholars, teachers, researchers ̶ is stepping up, many of whom are women. Perhaps they are inspired by Rachel Carson, who launched the age of environmentalism in America with the publication of Silent Spring in 1962. It still goes on apace, with men and women of equal dedication, knowledge, and energy leading the way. And FOW is very much a part of this movement. This spring, take a closer look at our environment and the marvelous aspects of nature we are preserving for posterity in the Wissahickon ̶ for people of the Philadelphia area now and for generations to come.