Home · News · Education · From the Archives: The Indian Statue in the Wissahickon

From the Archives: The Indian Statue in the Wissahickon 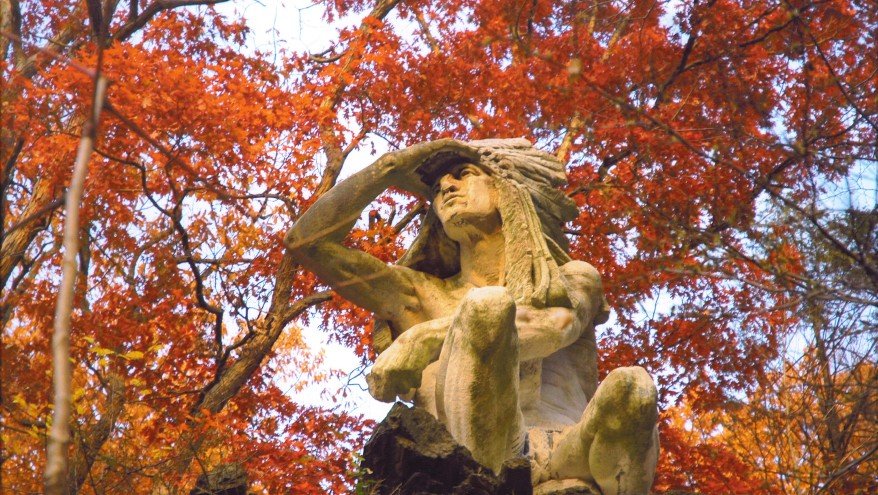 This month, we celebrate the 115th anniversary of the iconic Indian Statue in Wissahickon Valley Park by reprinting an article on its history. This is part of our occasional series in which FOW publishes articles that appeared in our publications in the past and still resonate with us today. This piece was written by Dena Sher, a former FOW Board Member and associate editor of FOW’s newsletter, and first appeared in FOW’s fall 2002 newsletter.

Kneeling on a rock 100 feet above the Wissahickon Creek, the white marble statue of an Indian has been a popular attraction for park visitors since its dedication on June 14, 1902. Although not easy to reach on foot, the dramatic 15-foot high sculpture can be viewed from Forbidden Drive across the creek if one stands just north of the path to the Rex Avenue bridge.

To commemorate its 100th birthday, the statue was recently completely cleaned and restored as a joint effort of the Friends of the Wissahickon, the Fairmount Park Historic Preservation Trust [now Fairmount Park Conservancy], and the City of Philadelphia. A ceremony will be held on Forbidden Drive opposite the statue on Thursday, October 17, at 4 p.m. to celebrate the restoration and the birthday. The public is invited to attend.

The present Indian is actually the third to have occupied a place on the rock. The Lenni-Lenape Indians, who hunted and fished in the Wissahickon but never actually lived there, were thought to hold their pow-wows at the rock which acquired the name “Council Rock.” ln 1854, John Middleton, owner of the surrounding land, erected a wooden statue of an Indian to honor the Lenni-Lenape who supposedly had their last council there in the mid-1700s before departing for lands to the west. The artist creating the wooden statue was instructed by Mr. Middleton “to paint the wooden icon of the departed Lenni-Lenape brave and adorn him with colors proper to his race and tribe.”

Later, Ruben Sands, proprietor of the Indian Rock Hotel on Wissahickon Turnpike (the present Forbidden Drive) near the Rex Avenue bridge, replaced the original wooden statue with another. It was a silhouette of an Indian “gaudily painted” made from large barn boards and propped up on the rock by a post at the back. The Indian served as an advertisement for the hotel and was a favorite destination for hotel guests who climbed the steep slope as part of the day’s recreation.

The Indian Rock Hotel was torn down after the Wissahickon Valley was incorporated into Philadelphia’s Fairmount Park system sometime after 1868, but the wooden Indian statue remained.

A new statue was co mmissioned early in· the century by Mr. and Mrs. Charles W. Henry, who were members of prominent Chestnut Hill families and active community leaders. The Henrys wanted to revive the intent of the first wooden Indian erected by John Middleton and commemorate the passing of the native Lenni-Lenape from the region. For this reason, the statue has his hand to his brow looking west in the direction of the departing tribe.

A prominent sculptor of the time, John Massey Rhind (1860-1932), whose works were in place in states up and down the east coast and in the Midwest, was given the commission. Mr. Rhind did not have much concern for accurate representation since he gave this east coast forest Indian a western plains Indian war bonnet.

The dedication of the new statue was well attended by dignitaries, such as Samuel W. Pennypacker, the Governor of Pennsylvania, and Colonel A. Louden Snowden, president of the Fairmount Park Commission. In his dedication speech, the president of the Wissahickon Historical Society, C. Chadwick, called the statue “Chief Tedyuscung.” The Henrys protested since it was not their intention to honor a specific Indian, but the name stuck, probably because it had been attached to the other Indian statues occupying the site.

One might raise the question as to whether Tedyuscung, who was a real person although never a chief and only half Indian, deserves a statue honoring him. According to an article written for the Chestnut Hill Local in 1994 by historians Helen and Jefferson Moak, Tedyuscung was intelligent and articulate “which made him well respected by colonists as well as the Indians for whom he was a spokesman and leader.”

Legend has it that Tedyuscung died in a fire in a house behind the Hill Company while in a state of inebriation, however the Moaks tell a different story of his death. They state that he was a victim of political murder “arising out of battles over land disputed between Pennsylvania and Connecticut.” At the time of his death in 1763, he was living in a house near Wilkes-Barre provided for him by the Penn family. The Moak article also states that his outrage over the treatment of Indians by the whites led him to identify with the Indian side of his heritage.

There is, however, no concrete evidence that Tedyuscung ever set foot in the Wissahickon. At the most, there were 8,000 Lenape Indians living between Trenton and Wilmington when the European settlers arrived in the area. No trace of Indian artifacts has ever been found in the Wissahickon.

Like the dams in the Wissahickon Creek that remind us of the Valley’s era of industry (about 25 mills existed there in the early nineteenth century) and Valley Green Inn that is an icon of the period when the valley abounded with inns for nineteenth-century vacationers, the Indian statue recalls the period before the arrival of the colonists, when the Wissahickon’s natural riches were for the Indians alone.

Looking to visit Tedyuscung? Click here for an iconic tour everyone can enjoy!