An Ode to Stone 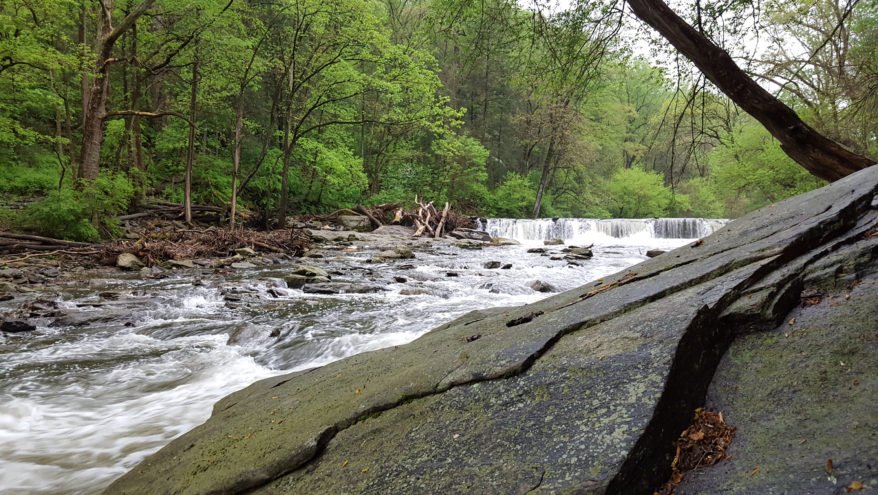 The Wissahickon is described as a pelitic schist and gneiss with interlayers of quartzite. Color is highly variable as is the mineralogy. A general description for the unit is described as a silver to brown garnet mica-schist.

More even than the plants, the animals, and the creek, it is the stone that gives identity to this place. There are other mid-Atlantic forest, meadow, and riparian biomes, and other creeks. But only in combination with the rock do the living things and stream make the Wissahickon quintessentially, uniquely, Wissahickon. 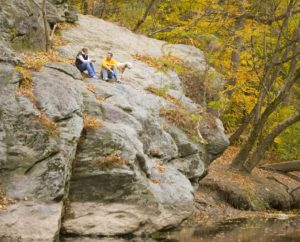 Over geologic epochs and Pleistocene millennia, through tectonic drift, sedimentary deposition, subsidence, sublimation, upheaval and finally the tedious inexorable effects of erosion, the essential physiognomy of what we now call The Wissahickon was created and revealed. This physiognomy is that of the rock, close to the surface, giving shape to the land the way the skull of an emaciated person reveals the fundamental form—the face.

This is not the Great Plains where several feet of top soil soften the contours of the Earth’s superstructure in the way that blubber conceals the shape of a whale’s bones, masking in utterly graceful lines the oversize tinker-toy construct of its framing. Rather, the Wissahickon is representative of a place where the planet’s flesh is thin on bone—so thin that massive hunks of the it protrude garishly in places like compound fractures; smaller fragments of it litter the skin, and lie everywhere within and beneath. Looked at another way, the skeleton has been formed, but the flesh has not yet coalesced to bind and conceal the bone, to resorb the excess pieces.

To work and play in the Wissahickon is to experience its stone: to see it, feel it under foot and in the hands, or to brush against it with your body; to hear it clatter when jostled; to smell it wet after rain or when fractured with a hammer’s blow; to taste its dust on your lips while biking Forbidden Drive on a hot dry day and to rub it from your sweaty eyes after a trail run; to have glinting mica adhere to your skin and gather in your pockets, the fingers of your work gloves, the lint trap of your clothes dryer, and the rubber mats of your truck. It dulls your shovels, blunts your Pulaski, neutralizes your saw chain, and abrades your hands. Depending on conditions it either grips your tires or refuses to grip them.

Moreover, it is beautiful at any distance. Like a pure crystal, the shape and color of which remains consistent regardless of scale, the striations created by metamorphic forces deep in the earth and co-mineral inclusions give intricate beauty to mere shards, an aesthetic that is mimicked in the folds and dykes of dramatic cliff faces. 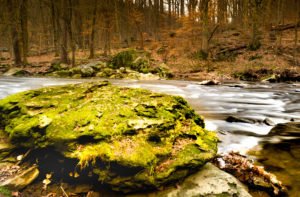 It is also alive. At scale, the crags and shadows of its cliffs and outcroppings support (and are slowly consumed by) the ancient microscopic algal-fungal symbiosis of lichen, while simultaneously the roots of stolid Chestnut Oaks bore into crevices to bear trunks that push branches eighty feet into the sky. Along with the lichen, cling the moss, grass, and wildflowers. In cracks and depressions with the muscular oak roots we find blueberry, ferns, and the ropes and tendrils of poison ivy vines. And we find mountaineers’ fixed bolts, vandals’ graffiti, and in at least two places—Devil’s Pool and Livezey Rock—bronze plaques. 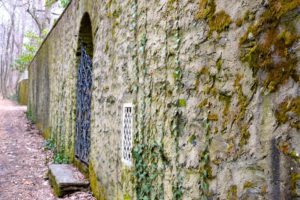 We build over it, around it, and of it. We expose it and we bury it. We hoist it, pry it, hammer it, chisel it, carry it, drag it, and pile it up. We load it and we unload it. We prep it and we schlepp it. We use it to build trails. We use to close trails. We use it to enhance trails. We use to protect trees. We use it to hold soil. We use it to deflect water, to hold back water, and to guide water. We use it to encourage some human behaviors and to discourage others. We make of it walls, stairs, terraces, ramps, bridges, causeways, drains, reversals, chokes, abutments, and technical features. It is indifferent to water, boots, horseshoes, tires, and even fires. It is simultaneously commonplace and rare, free and costly.  Without its eponymous rock, Wissahickon Valley Park is simply unimaginable.

Pay those rocks some special notice the next time you are in the park.

By David Dannenberg, FOW Board Member